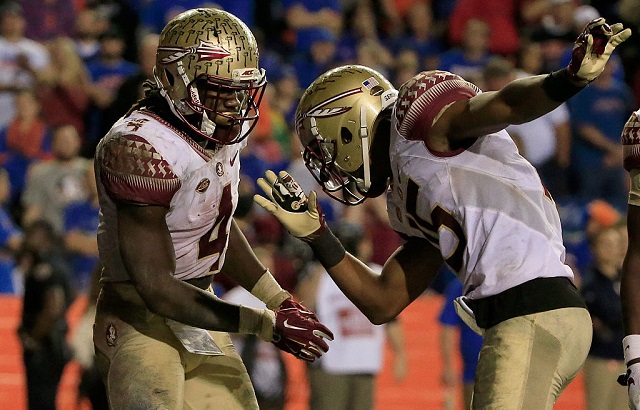 1 Burning Question: Will Florida State make it back to the College Football Playoff?

Jimbo Fisher has done a great job at Florida State. During six seasons in Tallahassee, he’s guided the Seminoles to four division championships, three conference titles, and a national championship.

Unfortunately, FSU took a step back last season, finishing second in the Atlantic Division, while losing more than one conference game for the first time since 2011.

Will the ‘Noles return to their winning ways in 2016?

Fisher has to like his chances. Sure, the quarterback position is unsettled at the moment, but that’s the only real question mark on offense. Dalvin Cook – arguably the best running back in the nation – returns this fall after rushing for 1,691 yards and 19 touchdowns last season. He’ll run behind an offensive line that welcomes back nine players with starting experience (74 career starts), including first-team All-ACC tackle Roderick Johnson.

On the other side of the ball, the Seminoles are in great shape as well. All three starters on the defensive line return, including DeMarcus Walker — who recorded 15.5 TFL and 10.5 sacks last year — and third team All-ACC selection Derrick Nnadi (45 tackles, two sacks). Although FSU loses two starters at linebacker, Ro’Derrick Hoskins (52 tackles, 6.5 TFL) and Jacob Pugh (32 tackles, three sacks) are back, giving the ‘Noles plenty of experience in the middle. While the secondary is young, it’s still loaded with talent, including freshman All-American Derwin James, who recorded 91 tackles, 9.5 TFL, and two forced fumbles last year.

4.68 – This was the average yards per play that Florida State’s defense allowed last season, the 10th-best total in the country. Make no mistake about it: the Seminole D was one of the best in the nation last year. It held opponents to just 3.83 yards per carry and 5.6 yards per pass attempt, which ranked fourth nationally. If the Seminoles are going to win the ACC Atlantic, the defense — which must break in five new starters — needs to match last year’s production.

50.6 – This was FSU’s completion percentage against ranked opponents last year. Although the ‘Noles completed 63 percent of their passes last season, they did struggle with accuracy at times. This was evident against ranked foes, as Florida State signal callers barely completed half of their passes in those contests. In order for the offense to be successful, the quarterback(s) must be more accurate this fall. Otherwise, opposing defenses will load the box to take away Dalvin Cook and the running game.

Why it Matters: Most people probably expected the Ole Miss and/or Florida game(s) to be on the list. However, a loss in either of those contests wouldn’t knock the ‘Noles out of the ACC and College Football Playoff races. On the other hand, suffering a defeat to Louisville could prevent Florida State from winning a championship of any kind. The Cardinals led the Seminoles 14-13 in the third quarter last year before the defense forced two turnovers to turn the game into a laugher. Louisville returns 18 starters from that team, including quarterback Lamar Jackson, who is one of the top dual-threat quarterbacks in college football. If the Seminoles are going to win the conference championship, they must get a “W” in this contest.

Why it Matters: Florida State – Miami is one of the top rivalry games in college football, making this contest a crucial one for both squads. Despite having 37 players on NFL rosters heading into the 2015 season, the Hurricanes haven’t appeared in the ACC title game yet. That will change this season under the leadership of new head coach Mark Richt. Under his guidance, quarterback Brad Kaaya and the offense will be even better this year, which will have Miami in contention for the Coastal Division title. Although a loss wouldn’t knock the ‘Noles out of the conference championship race, a victory in the contest would give them seven wins in a row over the ‘Canes, matching the longest streak in the history of the series. While that might not matter to the players that are on campus, it certainly does to potential recruits.

Why it Matters: This could be one of the 10 biggest games in college football this year. Clemson and Florida State are both in the top four of the Amway Coaches’ poll, and will likely enter this game undefeated. The Tigers return eight starters on offense from an explosive unit that ranked 11th nationally in total offense last season, including Deshaun Watson, who became the first player in FBS history to pass for 4,000 yards and rush for 1,000 yards in a single year. Although Clemson’s defense loses some of its top players, there’s no reason to think that Brent Venables won’t mold it into a championship unit again this season. Just like last year, this contest should ultimately decide who wins the Atlantic Division championship, making it a “must win” game.

Dalvin Cook, RB — Cook was the most explosive running back in the ACC last season. He led the conference in rushing with 1,691 yards, and led the nation with 22 runs of 20 yards or longer. He was the best running back in the country on second down last year, rushing 75 times for 718 yards, with 34 of those runs resulting in a first down. His 9.57 yards per carry on second down was easily the best total in the nation, which was a full two yards better than presumptive Heisman Trophy front-runner Leonard Fournette. Cook will be the focal point of the Seminole offense this season, especially early on in the year as the team breaks in a new quarterback. Expect him to have another monster year.

Derwin James, S — A highlight reel waiting to happen, James can do just about anything. He excelled against the run last year, finishing second on the team in tackles (91), second in tackles for a loss (9.5), and second in forced fumbles (2). He also played well in coverage, breaking up four passes. James is also a more-than-capable-pass rusher (4.5 sacks), who can literally overpower opposing offensive lineman (like in the clip below). He’s so versatile that he even worked out in some drills with the defensive ends during spring practice. Wherever he lines up this fall, James will be a key player for the Seminole defense, and could earn All-American honors this season.

DeMarcus Walker, DE — One of the more disruptive players in the ACC last year, Walker earned second-team all-conference honors. He practically lived in the opponent’s backfield last year, ranking fifth in the league in sacks (10.5) and eighth in tackles for loss (15.5). Walker also led the conference in forced fumbles (4), broke up five passes, and intercepted a pass. He’ll team with Derrick Nnadi and Josh Sweat to form one of the top defensive lines in college football this season.

Deondre Francois / Sean Maguire, QB – With Maguire sidelined with a foot injury, Francois will start the season opener. Whenever he gets healthy, who starts is anyone’s guess. Regardless of who’s under center, it’s imperative that the starter be accurate and avoid turnovers. In three losses last season, FSU quarterbacks completed only 54.6% of their passes and threw six interceptions. These numbers must improve for the Seminoles to win the ACC this fall.

As noted above in the 4 Key Players section, there’s absolutely nothing that James can’t do. Whether it’s stepping up in run support, knocking down a pass, or rushing off the edge, he can do it all. He’ll make a ton of big plays for the Seminoles again this season, and earn a spot on at least one All-American team.

4. Florida State gets solid play from the quarterback position.

Although it’s still unclear as to who’s going to be the starter when Maguire returns from injury, I have no doubts that the ‘Noles will get plenty of production from the quarterback position this fall. Jimbo Fisher has done an excellent job of producing solid signal callers during his career, including Rohan Davey, Matt Mauck, JaMarcus Russell, E.J. Manuel, and Jameis Winston. There’s no reason to think that he can’t mold this year’s starter(s) into a consistent performer as well.

Despite his stellar numbers (1,691 yards rushing, 7.38 ypc, 19 touchdowns), Cook wasn’t even a finalist last year. Given that 2015 Walker Award finalists Christian McCaffery and Leonard Fournette return, many would expect one of them to take home the hardware in December. They won’t. Running behind a solid offensive line, Cook will post even bigger numbers than he did last year to earn this prestigious trophy — which is awarded annually to the nation’s top running back.

This won’t be a popular pick. After all, the ACC media overwhelmingly picked the Tigers to win both the Atlantic division title and the conference championship. However, the Seminoles have much more experience, which usually makes the difference in games between two very evenly matched teams. Playing within the friendly confines of Doak Campbell Stadium, FSU will get a season-defining win, roll to the ACC Championship, and ultimately earn a spot in the College Football Playoff.

Led by an outstanding defense, a potent running game, and an improved passing attack, the ‘Noles will win the national championship this season.