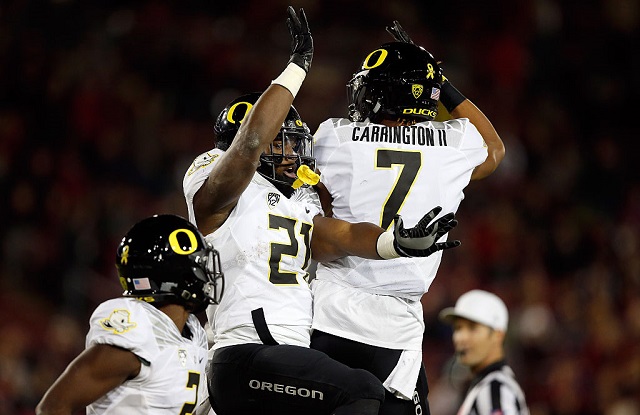 1 Burning Question: How Good will the Quarterback Be?

Oregon had problems last year. The defense completely collapsed, which was a major issue in the Utah and Washington State losses. The quarterback doesn’t play defense, but there was a direct correlation between quarterback play and how bad the defense was.

When Vernon Adams Jr. was healthy and efficient, so was Oregon as a team. When he was hurt or Jeff Lockie was playing, the offense was much less efficient and the defense seemed to follow that. This was never more evident than in the Alamo Bowl, when Oregon led 31-0 before Adams was injured but gave up 31 points (and scored none) during the rest of regulation after the injury.

So who will be quarterback this year? We don’t know yet. Lockie is still on the roster, but he hasn’t done enough in his opportunities to earn the starting job. Graduate transfer Dakota Prukop (from Montana State) and redshirt freshman Travis Jonsen seem to be the most likely options. No one expects them to be the next Marcus Mariota, but whoever starts has to at least be close to Adams’ efficiency, or Oregon could be in for another long season.

24.5 – This is Oregon’s average score against the spread when it didn’t cover. Oregon, like Baylor, more often than not covers the spread. It’s what happens when an offense scores so often. The spread can’t be set too high, but in recent years, offenses like Oregon and Baylor have been able to essentially make every win a “pick your score” game. But I am much more interested in the games that Oregon couldn’t cover. The Ducks didn’t cover five times. One of those was a 42-point loss as an 11-point favorite against Utah. Another was a six-point loss in a pick ’em against TCU in the bowl game. All in all, the Oregon fell below the spread by an average of 24.5 points per game when it couldn’t cover. This just shows that while the Ducks can put up spectacular numbers, when they fail, they fail pretty spectacularly.

5:4 – This was Jeff Lockie’s touchdown:interception ratio last year. This is the reason that he won’t be the starter this year. Lockie was also sacked on a whopping 10 percent of drop-backs last season. He is a talented athlete, but not fast enough at making decisions to be effective in Oregon’s system. He can serve as a backup if he gets enough reps to be comfortable, but Prukop or Jonsen has to be the starter.

Why it Matters: This will be our first real chance in 2016 to judge Oregon. Nebraska‘s defense is vulnerable to speed on the edge, as we saw in its bowl game last year. As we also saw, the Cornhuskers have a powerful offense and a defense that won’t break when push comes to shove. Virginia might give us some insight into Oregon’s state at the moment, but Nebraska will be the real test that shows us where the Ducks are.

Why it Matters: Oregon has a 12-game winning streak against its heated rival. That might be in doubt now, though, as Chris Petersen has turned Washington into a Pac-12 favorite. We all remember what Petersen did to Chip Kelly’s offense back in 2009. This Oregon offense has become much more efficient since then, but the principle is still the same. If Oregon wants to win the Pac-12, it has to beat the Huskies or face a long uphill battle.

Why it Matters: I could have gone with the Stanford game here, but this is more important. The Stanford game might determine the winner of the Pac-12 North, but this is about revenge and pride. Oregon was embarrassed at home last year. It needs to make a statement that something like that will never happen again.

Royce Freeman, RB — Freeman is the biggest offensive star that Oregon has right now. He’s quick, he’s strong, and he has explosive breakaway speed. He can’t function without a good quarterback to run the offense, but he’s the one who will make most of the highlight reels.

Dakota Prukop, QB — I’ll go out on a limb and guess that the graduate transfer will win the starting job. He definitely seems to be the most talented of the group, even if he’s not the most polished. Either way, though, as I said several times above, the way the quarterback goes will determine the path of the season for Oregon.

Tyree Robinson, S — The Oregon secondary was exposed in the Utah game last year, but it improved as the season went on. Now the Ducks return an experienced secondary led by lots of guys who got bits and pieces of playing time last year. The pack of Robinson, Charles Nelson, Reggie Daniels, and others will provide a good and deep secondary. It might not have any true lockdown corners or elite safeties, but the secondary should be more than good enough to keep offenses relatively in check.

Brady Hoke, Defensive Coordinator — If we’re being honest, we were all shocked by this choice. Hoke’s failures as the Michigan head coach will haunt his career forever. But we shouldn’t forget that he built solid programs with strong defenses at Ball State and San Diego State. Also, the Michigan defenses were very strong in his four-year tenure. He was done in by a lack of offense. For an Oregon defense that was abysmal last year, anything Hoke brings will be more than welcomed.

5. Freeman will be in the top 10 of the Heisman voting

There are too many high-profile names in this year’s class to predict that anyone will be a Heisman finalist. With all of the preseason hype, the vote will probably be a runaway between Deshaun Watson and Leonard Fournette — if they put up good stats. But Freeman has the name recognition and talent to put up amazing numbers as well. I can’t say for sure he’ll be a finalist, but he’ll at least be close.

4. The Oregon defense will be greatly improved

I am a big believer in Brady Hoke. I saw what he did at Ball State and San Diego State. It was incredible. Maybe the Michigan fiasco will put him off the head coaching radar for the time being, but he will do good things as a defensive coordinator at Oregon. And the difference will be immediate.

3. Oregon will have one of the best offenses in the country

Okay, so maybe this isn’t particularly bold. After all, that’s what Oregon does. But after last season, especially when Adams was injured, it needs to be restated. Oregon has plenty of talent at both receiver and running back and will bring video game statistics back to Eugene. The quarterback will be a question mark until the season starts, but there are enough weapons on the field to allow the offense to succeed regardless of who ends up under center.

2. Oregon will avenge both Pac 12 losses from last year

The Ducks lost two conference games last year: Utah and Washington State. Those are both games that the Ducks shouldn’t have lost, especially the Washington State game. Oregon will be out for vengeance and will get it. The Pac-12 season will be tough and grueling, but Oregon will make sure, at the very least, not to lose these two games.

It’s crazy that the Ducks aren’t being talked about as a favorite. It’s all about Stanford and Washington. It’s just insane. The Ducks had one bad year, but are still loaded with talent and have a coach that took them to the National Championship Game two years ago. They get Washington and Stanford at home. And, they just have too much talent to be forgotten. This will be the season for Oregon to remind us why they are a college football elite and not just a flash in the pan.