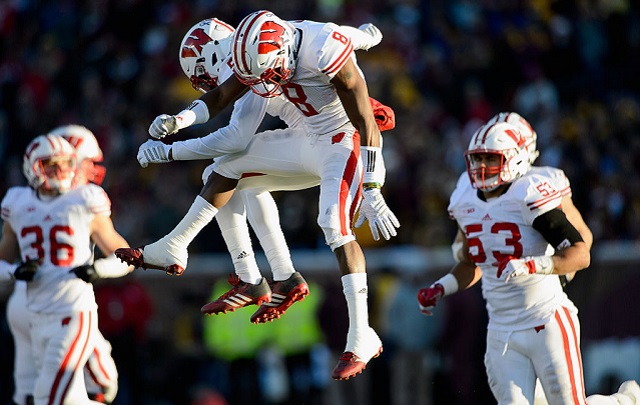 1 Burning Question: How can Wisconsin handle its brutal schedule?

There are a few questions that we can ask. We can wonder if the offense will improve in Paul Chryst’s second year. We can worry about how good a job Justin Wilcox can do with the defense. We can ponder over running back Corey Clement’s health and whether he will live up to his potential this season.

Those are all interesting topics that will weigh on the minds of Wisconsin fans as the season rapidly approaches. But they’re not what I’m worried about. I’m worried about the schedule. Because no matter how talented this team is — and Wisconsin definitely appears to be very talented — the schedule is one that only a true championship team could navigate.

Aside from a blockbuster non-conference season opener in Lambeau Field against LSU, the Badgers will also play Ohio State, Michigan, and Michigan State in cross-divisional Big Ten play. That is a brutal four games against expected preseason top 15 teams. Not only that, but the two games immediately after Ohio State are against Iowa and Nebraska. Just going 6-6 with this schedule will be impressive. So while we’re ranking the Badgers to start the season, ending it ranked will be a tall task indeed.

10 – The number of 2016 opponents who played in a bowl last year. Okay, that stat is a little overblown because two of those 10 (Minnesota and Nebraska) went bowling at 5-7. The point still stands, though, that this schedule is hard. Akron, a usual cupcake, actually won eight games under Terry Bowden last year. There are five Big Ten opponents that will likely be ranked when Wisconsin plays them. There’s LSU. And Northwestern, who also won 10 games last year. In fact, Wisconsin will face 10-game winners in four straight games and in five out of six from the end of September to the start of November. Have I made my point yet? This schedule is brutal.

1.9 – The decline in Corey Clement’s yards per carry last year. In 2014, while acting as a trustworthy understudy for Melvin Gordon, Clement averaged 6.5 yards per carry. He actually averaged 8.2 in his freshman year in 2013, which was skewed by relatively limited carries (67) and a few very long runs. Still, even with the injury last year, that decline is alarming. In his sophomore year, Clement looked like a suitable heir to Gordon’s throne. After a disappointing junior season, though, we have to wonder what he’ll do in 2016.

Why it Matters: You’re going to notice a trend in these three games. I’m not picking the major non-conference game against LSU. It won’t be the games against other West favorites Iowa and Nebraska. The games that will make or break Wisconsin’s season are the trio against the Big Ten East powers. They will be for bragging rights, recruiting prowess, and any chance to win the West. And it starts on the road against the reigning conference champion.

Why it Matters: Wisconsin’s road trip through Michigan continues in Week 5. It would be a shock if Michigan has a loss by this game, which means that Wisconsin is looking at a road trip against a likely Top 5 team. Cross-division games count the same in the division standings, so Wisconsin cannot afford to lose all three if the Badgers want any chance to compete in the Big Ten Championship Game in Indianapolis. And for Wisconsin, the path to Indy runs through the state of Michigan.

Record in Last 5 Meetings: 1-4
Last Year’s Result. Did not meet. The last meeting was in 2014 Big Ten Championship Game, which Ohio State won 59-0.

Why it Matters: First of all, many players on this roster were there for the absolute humiliation at the hands of the national champion Buckeyes two years ago. Wisconsin needs to show that Urban Meyer doesn’t have it completely outclassed. It’s more than just that, though. Wisconsin needs to win at least one of those games to show that it can compete with the Big Ten East. It, along with Nebraska, is the premier program in the West. If the West wants to show that it’s not “little brother” to the East, its flagship program can’t afford to get swept.

Corey Clement, RB — Like I said before, Clement has been consistently declining in efficiency each year of his career. Wisconsin has plenty of options in the backfield, so a lack of Clement might not be the end of the world. But the Badgers will be much better off if they can find a consistent and reliable option in the backfield, and Clement is the best option to become that. He also has the most potential of all of the running backs, so him being the top option is Wisconsin’s best chance at having a successful season.

The offensive line — I’m not going to put any other offensive individuals on this list. Wisconsin needs a game manager at quarterback, though if it gets a true passer, no one would complain. It needs speedy individuals in the backfield and on edges to run routes and jet sweeps. This offense has potential to be a juggernaut downhill. And, it all starts and ends with the O-line. The play of Michael Deiter, Dan Voltz and the rest of the offensive line will determine whether the offense succeeds or sputters this fall.

Vince Biegel, LB — With Joe Schobert off to play for the Cleveland Browns, Wisconsin needs someone to anchor the linebacking core, and Biegel is the top candidate for that role. Biegel had eight sacks last year and 14 tackles for loss. Schobert was a monster behind the line who could make plays all over the field. Someone needs to fill those massive shoes. I’m guessing it will be Biegel.

T.J. Watt, LB — Okay, he probably won’t be a key player this season, but the name matters. Wisconsin is losing both Michael Caputo and Tanner McEvoy, who combined to be a formidable secondary. Someone will need to step up there, but we really don’t know who it will be yet. But back to the linebackers. Biegel will be the leader of the group. Yet T.J. Watt, brother of J.J. Watt, has the best name value on this team. And when finding a player who can inspire a locker room because of national attention, T.J. Watt has the most potential. Give him a few highlight-reel plays and Wisconsin will be mentioned daily on college football television and radio shows. It might not be the biggest impact on this season, but that’s the way to restore this program to being one of the flagships of the Big Ten.

"He's a team-oriented coordinator. His track record speaks on its own." The #Badgers D has a new leader this fall. https://t.co/WAgVHSFDrr

5. Wisconsin will have a winning record

In most years, this is an insult and not a bold prediction. 2016 isn’t most years. Six wins should be the starting goal for Wisconsin, as the Badgers will likely play at least five Top 20 teams, as well as Northwestern and Nebraska. Eight wins will be a great year with this schedule, but six isn’t a given either. Wisconsin has the sixth-longest bowl streak in the country right now (14, tied with Boise State). It would be a shame to see that end just because of a ridiculously tough schedule.

4. Justin Wilcox will be one of the best defensive coordinators in college football

This prediction might not be particularly bold because, in my opinion, he already is. He showed it at Boise State. He did a good job at Tennessee and Washington. He struggled a little at USC. But at Wisconsin, he is getting the types of players he had back at Boise State, which should make him much more effective and comfortable. Wilcox will make waves with the defense this year, making Wisconsin forget about LSU’s poaching of Dave Aranda.

3. The LSU game will be a close one

Early lines from VegasInsider have set this as about a 10-point spread. That number will probably rise as the season approaches. LSU is expected to be a great team while Wisconsin is a pretty good one, but nowhere on the Tigers’ level. Remember that when the two met in 2014, though, Wisconsin dominated the first half before the LSU offensive line took over in the second. Maybe Wisconsin will get worn down again, but keeping this game to a one-possession affair will set a tone for the Wisconsin season. The Badgers will open the year with the message that no matter how tough the opponent, the game will be a close one. It’s a message they will need to carry through the start of November.

2. Wisconsin will finish in the top two of the Big Ten West

Yeah, the cross-divisional schedule is brutal. That’s probably three losses for Wisconsin, while only one for Iowa and Nebraska, as those two only get Michigan and Ohio State, respectively. I don’t know if Wisconsin will be lucky enough for those two to lose games and make up that difference. But if the Badgers run the table in the West, then they will finish at number two in the division. If they drop a West game, they might still have a chance, but it gets tougher. Either way, I think either Wisconsin will beat one of those three or run the table in the West. If both of those things happen, a division title is all but in the bag.

1. Wisconsin will end the season with a Top 5 SOS

This prediction might be a little unfair, as different strength of schedule metrics measure things in different ways. Playing in the Big Ten West will hurt Wisconsin in many of those calculations. But with LSU, Akron and Georgia State in the non-conference (all three should end the season with winning records) and the insane cross-divisional lineup of Ohio State, Michigan, and Michigan State, Wisconsin’s strength of schedule numbers should be through the roof. If the Badgers can miraculously pull of 9-3, the selection committee will have to take note of this schedule and consider a ranking worthy of a prestigious New Year’s Day bowl game.