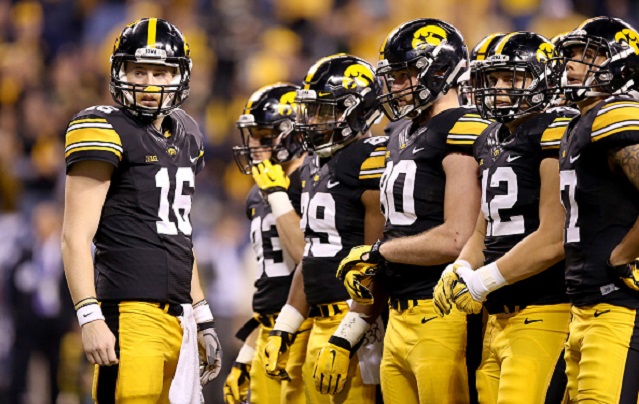 1 Burning Question: Can Iowa compete for the Big Ten championship in back-to-back seasons?

That’s the last time Iowa won back-to-back conference titles, dating back to its days in the Western conference. This season, the Hawkeyes will look to accomplish a part of the aforementioned feat, gunning for their second straight division championship and a shot at redemption in the conference title game.

From 2011-14, Ferentz compiled a 26-25 mark, including three bowl losses (Insight, Outback, and TaxSlayer Bowl). Entering the 2015 campaign, his seat began to attract heat.

A month prior to the beginning of last season, Ferentz inked a 10-year contract, paying him roughly $4 million per season. The deal ranked No. 14 among Division I coaches, with Alabama’s Nick Saban leading the way (about $7 million each season). Considering some Hawkeye fans had already started to sharpen their pitchforks to chase the Royal Oak, Michigan, native back to his hometown, the news came as a bit of a surprise.

However, those opinions swiftly changed. Iowa delivered an undefeated regular season, epitomized by its win in Wisconsin. Cornerback Desmond King solidified his emergence in the four-point victory, too, intercepting two passes. The then-junior even earned enough recognition to reel in the Jim Thorpe Award. Overall, he and his teammates’ performances quickly reaped attention, placing No. 19 in scoring defense in the country (20.4 points per contest).

Offensively, the Hawkeyes’ passing and rushing attacks essentially split the workload, accounting for 2,862 yards and 2,544 yards, respectively. Recent graduate Jordan Canzeri paced the backfield, collecting 981 yards on 183 carries (5.4 YPC). Still, all of the tailbacks played a role, combining for 35 touchdowns, tied for No. 12 in scoring production via the position. Yet, the offensive line will miss leadership up front, losing two starters from a campaign ago.

+11 — Iowa’s turnover margin (No. 11 in the nation). The Hawkeyes were tied for No. 13 in Division I in turnovers gained (27) and also knotted up at No. 25 for turnovers lost (16). Defensive coordinator Phil Parker returns eight of his starters from 2015, which contains middle linebacker Josey Jewell, who led the unit in tackles (126). In total, Jewell and King unified together as ballhawks, forcing a combined 13 turnovers. Nonetheless, in order to cause havoc, the group will need to find a consistent pass rush without defensive end Nate Meier, who recorded seven sacks last season.

Additionally, in his first full-season as the signal caller, quarterback C.J. Beathard tossed just five interceptions (tied for third among FBS schools), proving his ability to push the ball down the field without making mistakes.

.852 — Iowa’s red zone percentage (tied for No. 53 in the country). While the team won plenty of match-ups without a terrific conversion rate in the category, the Hawkeyes must polish up inside the 20-yard line in 2016. On top of that, Ferentz’s crew didn’t make many field goals either, attempting 20 overall, which was good for No. 61 in Division I.

A part of that concern stems from their third-down efficiency, where the Hawkeyes ranked 43rd nationally, converting just 41.7 percent of its opportunities last year. Even though that may not raise too many eyebrows, in the two losses versus Michigan State and Stanford, Iowa combined to go 8-for-29 on this crucial down (.275). Considering that the offense loses Canzeri and receiver Tevaun Smith, offensive coordinator Greg Davis should expect a potential improvement to be a rugged climb.

Why it matters: Although the Hawkeyes smacked the Wildcats in Evanston a season ago, head coach Pat Fitzgerald still has a great team, returning 11 starters from last year’s 10-win squad. Since this matchup could ultimately determine who wins the Big Ten West, Ferentz’s bunch should use a similar game plan to last season’s winning formula: contain running back Justin Jackson. Against the Wildcasts in 2015, the Hawkeyes yielded just 30 yards on 10 carries to the all-around tailback, who rushed for 1,418 yards last year.

Why it matters: Iowa’s recent success against Jim Harbaugh’s squad doesn’t mean much in 2016. The Wolverines have one of the best teams in the nation, and their hype begins on defense. Do-everything defender Jabrill Peppers represents an extremely athletic talent, exhibiting the ability to play corner, safety, and even warrant offensive snaps. Plus, Jourdan Lewis is a stud at cornerback, ranking third in Division I in passes broken up (20) last season. Beathard will have to make substantial plays away from those two for his team to prove it can contend against arguably the conference’s mightiest program. (Cue the Ohio State fans.)

Why it matters: The Cornhuskers may evolve into a juggernaut offensively, but that depends on the development of Tommy Armstrong, who tossed four interceptions against the Hawkeyes in their previous contest. If the senior quarterback can take advantage of his elite weapons, like Jordan Westerkamp, he’ll cause some issues for Parker’s secondary. Similar to Iowa’s match-up versus Northwestern, this game could end up deciding the winner of the division, too.

Desmond King, CB – King won the Jim Thorpe Award last year, which is awarded annually to the nation’s top defensive back. He excelled in coverage last season, finishing third in the country in interceptions (eight) and fifth in passes defensed (21). He’ll team with Greg Mabin to form one of the best corner combinations in the conference.

C.J. Beathard, QB – One of the most under-appreciated quarterbacks in the nation, Beathard had a fine season for the Hawkeyes in 2016. He was one of the most efficient signal callers in the Big Ten conference last year, ranking third in the league in completion percentage (61.6%) and first in fewest interceptions thrown (five). Iowa will rely on his precision passing to keep opposing defenses from loading the box to stop the run.

Josey Jewell, MLB – A second team All-Big Ten performer in 2016, Jewell can do a little bit of everything. He was a force against the run last year, recording 126 tackles (second in the conference) and 7.5 tackles for a loss. Yet he was equally impressive in the passing game, finishing third in the Big Ten in interceptions (four) and 13th in passes defensed (10). He’ll be the leader of the defense again in 2016.

LeShun Daniels, RB – With the departure of leading rusher Jordan Canzeri, Daniels becomes the Hawkeyes’ feature back this fall. He was solid as the team’s primary backup last season, rushing for 646 yards and eight touchdowns. Running behind a seasoned offensive line that includes five players with starting experience, he should easily eclipse those numbers in 2016.

5. Akrum Wadley plays a huge role in the offense this year.

Although Daniels is the feature back, Wadley will be just as important to the offense’s success this year. He was arguably the team’s most explosive running back in 2015, averaging 5.98 yards per carry. In addition, the Hawkeyes also used him as a receiver out of the backfield in the final two games of the season (six catches for 94 yards). Look for offensive coordinator Greg Davis to get the ball to him early and often this season.

I realize that this pick is as conservative as calling a draw play on third-and-20. But with all of the talented signal callers in the Big Ten, it’s tough to lead the league in any category. Yet, Beathard’s numbers have steadily improved every season since he arrived in Iowa City three years ago. He’ll make it four in a row this fall and will be (statistically) the most accurate passer in the conference.

Since he won the award last year, this might not seem like that big of a stretch. However, no one has ever won it twice. Regardless, King will continue to be the top cover corner in a league loaded with great defensive backs. He’ll lead the Big Ten in interceptions again this season, which will make him a virtual lock to win the Thorpe Award for an unprecedented second time.

Although many people on our staff – especially the editors – will disagree with this pick, I’ve got the Hawkeyes beating the Wolverines. Beathard’s precision passing will be the difference as Iowa picks up a season-defining “W.”

Led by a balanced offense and a defense that consistently forces turnovers, Iowa will win 10 games for the second straight season.