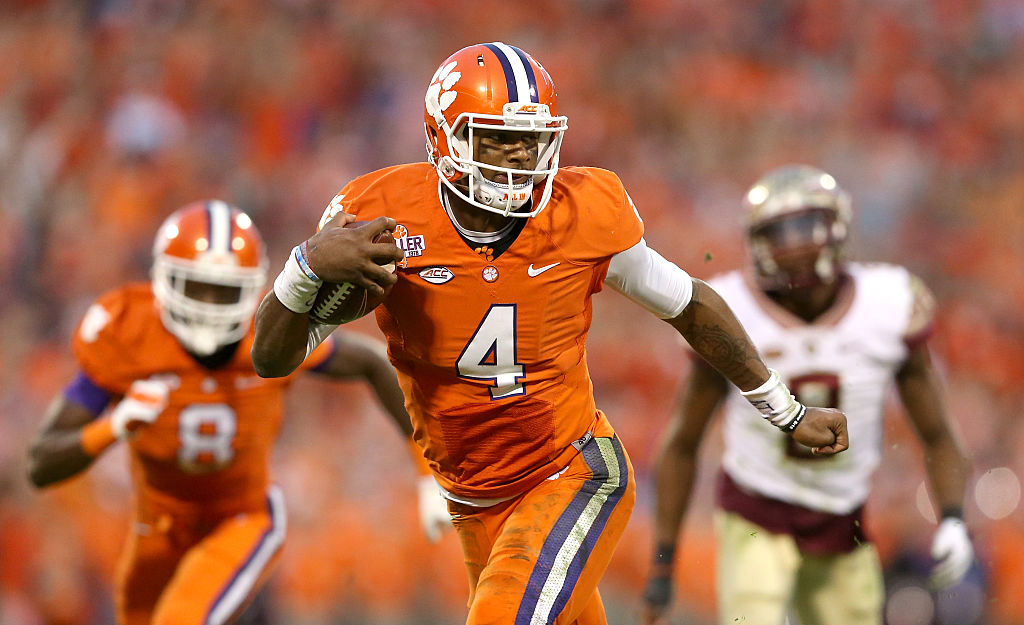 1 Burning Question: Will Clemson make it back the College Football Playoff?

Clemson had a great season in 2015, capturing the ACC Championship and advancing to the title game against Alabama. Even though the Tigers came up just short in that contest, last year was the most successful season the school has had since it won the national championship in 1981.

It’s certainly possible. After all, the Tigers welcome back the best quarterback in the nation in Deshaun Watson. A dual-threat signal caller that gives opposing defensive coordinators nightmares, Watson threw for 4,105 yards and 35 touchdowns, while rushing for an additional 1,105 yards and 12 touchdowns.

Although the Tigers lose 59 career starts on the offensive line, they’re still in great shape up front. Clemson welcomes back five players that started at least one game last season, including second-team All-ACC center Jay Guillermo.

Defensively, the Tigers will be solid again in 2016. Sure, Kevin Dodd, Shaq Lawson, B.J. Goodson, and Mackensie Alexander are gone, but several key players from last year’s defense – which ranked 10th nationally in yards per game – return.

Carlos Watkins and Christian Wilkins are back to anchor the middle of the defensive line after combining for 12.5 TFL and 5.5 sacks last season. Ben Boulware (82 tackles, 8 TFL, 5.5 sacks) and Dorian O’Donnell (5.5 TFL) will lead what should be a very solid group of linebackers. Even though the secondary loses three starters, it still has one of the top playmakers in the conference in cornerback Cordrea Tankersley (5 INT, 9 pbu), as well as Jadar Johnson (2 INT, 1 pbu), and Adrian Baker (2 INT), who both played well when given the opportunity last season.

27.73 – This was the percentage of successful third down conversions against the Clemson defense last season, the fourth-best total in the country. The key to the Tigers’ success on defense was to prevent the opponent from sustaining a long drive. Clemson’s D was one of the best in the nation on third down, allowing opponents to convert just 27.73% of the time. The Tigers were even better in conference play, limiting opponents to just 23.08 percent on third down. If Clemson is going to make it back to the College Football Playoff, the defense will need to match these stellar numbers again this season.

60 – This was Clemson’s touchdown percentage in the red zone last year, which ranked 70th nationally. Red zone percentage is a deceptive stat. The Tigers scored points on 54-of-60 (90%) trips inside their opponents’ 20-yard line, suggesting that they were successful in the red zone. However, Clemson only scored 36 touchdowns, which put them in the lower half of the FBS in that category. This number needs to improve this fall, especially if the Tigers were to find themselves in a shootout like it did with Alabama in the national championship game.

Why it Matters: Although it’s only the first game of the season, it presents the Tigers with an opportunity to make a statement. Sure, Auburn will likely finish in the middle of the pack in the SEC West this year, but it is still the toughest non-conference game on Clemson’s schedule this fall. It’s imperative that Dabo Swinney’s team get a “W” in this contest to start the season off on the right foot. Although a loss wouldn’t impact the team’s chances to repeat as conference champions, it would really hurt them in the College Football Playoff race.

Why it Matters: Make no mistake about it: the Atlantic Division race is more than just Clemson and Florida State this season. The Cardinal offense will be one of the more explosive units in the nation, led by quarterback Lamar Jackson, who completed 60.3 percent of his passes against ranked opponents last year and finished second in the league with 45 running plays of 10 yards or longer. The defense is just as good — if not better — than the offense, welcoming back top pass rusher Devonte Fields, as well as four starters in the secondary from last year’s team that led the ACC in interceptions. The Tigers need to get a victory in this contest or the much-anticipated showdown with Florida State is irrelevant.

Why it Matters: Assuming the Tigers defeat Louisville on Oct. 1, this game will decide who wins the ACC Atlantic division. The Seminoles return 10 starters on offense from last season’s squad, including Dalvin Cook, who finished fifth nationally in rushing last season. FSU’s defense is loaded with star power including DeMarcus Walker and Derwin James, who both earned All-ACC honors in 2015. Since this is a de facto elimination game in the College Football Playoff, it goes without saying that the Tigers need to win this contest.

Deshaun Watson, QB – Watson was the best offensive player in college football last year, becoming the first player in FBS history to pass for 4,000 yards and rush for 1,000 yards in the same season. He was especially impressive when Clemson fell behind last year, completing 70 of 108 passes for 933 yards and an impressive 8/1 TD-to-INT ratio, while rushing 45 times for 294 yards and 4 TDs. He’ll be the key to success for the Tiger offense again this year, and will improve on his already-solid numbers from 2015.

Wayne Gallman, RB – A second-team All-ACC performer last year, Gallman has led the Tigers in rushing in each of the last two seasons. He had a breakout year in 2015, running for 1,527 yards and 13 TDs, while catching 21 passes for 213 yards. He also excelled in crucial situations, carrying the ball 24 times for 185 yards on third down and six yards or less to go, with 19 of those carries resulting in a first down. Look for Clemson to get the ball in his hands early and often this fall.

Cordrea Tankersley, CB – One of the most versatile players on the Tiger D, Tankersley can do a little bit of everything. He played extremely well in pass coverage last season, ranking second in the ACC with five interceptions and fifth in the league in passes defensed (18). Yet, he also helped out against the run, recording 48 tackles and 3.5 TFL. He’ll be the leader of a talented secondary that will be one of the better units in the conference this fall.

Christian Wilkins, DT/DE – Wilkins had a great season at defensive tackle for the Tigers last year, registering 4.5 tackles for loss, 2 sacks, and 1 forced fumble. At 6-foot-4, 300 pounds, he’ll probably spend most of his time at defensive tackle this fall. However, he did play some at end during the spring, and might see some time there early in the season until Austin Bryant recovers from a foot injury. Regardless of where he lines up, he’ll be an important part of the Clemson defense.

5. Clemson’s offensive line will allow the fewest sacks in the ACC this year.

Yes, the Tigers lose 59 career starts and an all-conference performer on the offensive line. However, the Tigers welcome back five players who started at least one game last year, with three of those five starting 10 games or more. Offensive line coach Robbie Caldwell will mold this young, but talented group into one of the best units in the conference. They’ll surprise everyone by allowing fewer sacks than anyone — including Georgia Tech, which rarely passes because it runs the triple option.

Heading into 2015, most experts thought that Clemson’s defense would struggle, as it only returned four starters, including just one on the defensive line. The Tiger D-line proved them all wrong by having a monster year, which helped the Clemson D rank first nationally in tackles for a loss, second in sacks, and fourth in third down conversion defense. Despite losing Shaq Lawson and Kevin Dodd — who finished 1-2 in the nation in tackles for a loss in 2015 — the defensive line will be every bit as productive this season.

Although Auburn finished 7-6 last year, it’s worth noting that the Tigers did beat Louisville — who Clemson struggled against in week 3 — in the season opener. Couple that with the fact that four of the last five meetings were decided by a touchdown or less, you’d think that this year’s game would be a close one. It won’t be. Clemson will take control of the contest from the opening kickoff, and will cruise to an impressive victory.

Watson will be the most outstanding player in college football this season. Even if — and it’s a big if — he doesn’t eclipse the awesome numbers that he put up last year, he will still rank among the nation’s leaders in passing and total offense. While none of this come as a surprise to anyone, the fact that he’ll win the Heisman Trophy will be a shock because…

1. Clemson will win 10 games again in 2016, but will not repeat as ACC Champions

Make no mistake about it: the Tigers are one of the top teams in college football this season. Unfortunately, the only way that they’ll qualify for the College Football Playoff is to beat Florida State. Defeating the ‘Noles in Tallahassee is a tall order, especially against a veteran offense that returns 10 starters from last year’s squad. Although many will lobby for the Selection Committee to include both Florida State and Clemson, the Tigers will be left out of the field after losing to the Seminoles on October 29.