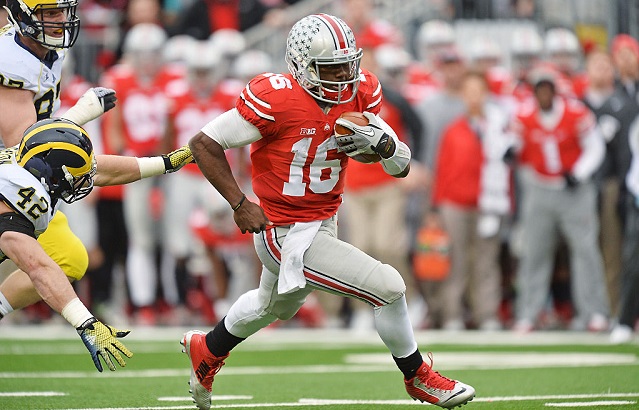 1 Burning Question: Can “The Land of the Wolves” Get its young talent to “The Edge” of Stardom?

How does Urban Meyer’s very young squad respond after a 2015 season full of drama, struggles, and disappointment, despite finishing with just one loss and stomping Notre Dame in the Fiesta Bowl?

What remains is a team with just six returning starters that will be reeling to find their identity through their few veteran leaders. A group which has already counted on two mantras to help build up team unity and competition for the more than 10 starting positions battled over during the spring and through fall camp thus far.

Even with the uncertainty, The Land of the Wolves is full of ravaging talent ready to unleash their bite in the national college football spotlight, led by a coach with plenty of experience turning very young teams into contenders and champions.

Meyer proved that in 2014, when the Buckeyes shocked the nation by winning the national championship with a young core that will now look to rule the NFL. To start 2014, Ezekiel Elliott was the backup running back. Three starters were replaced on the offensive line and questions remained about the young talent asked to take major leaps forward.

Ohio State heads into this September in a very similar position, hoping to prove that they can develop into a conference champion and potential selection into the College Football Playoff. 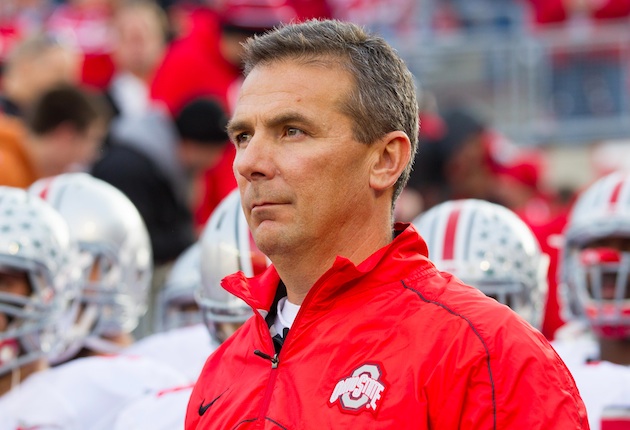 .850 –  The all-time winning percentage for Ohio State Head Coach Urban Meyer. That’s third-best in college football history. Those numbers are just a subset of what really matters when evaluating Urban Meyer’s prowess in leading a very young, inexperienced squad that will rely on coaching leadership. Meyer is 18-0 in true road games during his time at Ohio State. He is 43-3 all-time in games which he has more than a week to prepare for and has only lost four one-score games during his time at Bowling Green, Utah and Ohio State. When it matters in November, December and January, Meyer is 59-12 all-time and 24-3 at Ohio State. Overcoming close contests is part of what makes young teams championship caliber. Urban Meyer and the Ohio State coaching staff will put those players in a position to succeed.

64.91 – The percentage of touchdowns converted by Ohio State after reaching the red zone. The Buckeyes ranked 81st in scoring efficiency in the red zone last season. Missed catches, bad throws, and a mix-up of Cardale Jones and J.T. Barrett trying to figure out their roles played a major role in turnovers and field goals in an area that has haunted Ohio State in the past. Urban Meyer’s 2014 squad finished 49th in scoring efficiency in the red zone.

Why it Matters: This is the biggest non-conference matchup of the season with two teams in contention to be College Football Playoff participants. Do I need to say anything else? A win for Ohio State is huge for their strength of schedule and standing in the eyes of the playoff committee. Win or lose, this game is key for Ohio State in defining what type of team they are going to be. If the Buckeyes win, can they run the table through the Big Ten season? If they lose, can they respond and grow from a tough loss?

Why it Matters: Revenge can never erase a kicker celebrating a game-winning field goal by strutting his air guitar like the Motor City Madman. The Buckeyes will never get back the 2015 matchup with Michigan State that went horribly wrong. While most of the issues that arose in that game have moved on with the talent that jumped to the NFL, J.T. Barrett still has something to prove against the team that held him to just 46 yards passing in 2016.

Why it Matters: Throw the records out the window, this is the greatest rivalry in all of sports. You can have your Iron Bowl and Tobacco Road — it doesn’t even come close to The Game.

J.T. Barrett, QB — The only sophomore to ever be named a team captain at OSU, Barrett had a challenging 2015 with issues off the field and dealing with being named the backup to Cardale Jones to start the season. Still, he was the most efficient quarterback in the Big Ten and a lifesaver in the red zone as the quarterback was called upon to efficiently punch the pigskin in for six points before being named the starter late in the season. Barrett is the best decision-maker in the country when it comes to running the football in the read option, and even though his legs have put in him a successful position, it’s his growth as a passer that will put him in the Ohio State record books.

Curtis Samuel, RB/WR — The Bronx native has flashed moments of greatness since taking the field as the starting running back as a freshman in 2014. The only problem with Samuel is finding a place for him in the offense where he can get more touches. That will change in 2016 with Ezekiel Elliott, Braxton Miller, and a slew of receivers moving on to professional football. Getting Samuel involved in key points of the game is just as imperative to the success of the Buckeye offense as J.T. Barrett’s efficiency is.

Raekwon McMillan, LB — A solidified first-round pick heading into the 2016 season, McMillan is the heart and soul of the Ohio State defense at middle linebacker. Linebacker coach Luke Fickell has helped turn the highest-ranked recruit in the class of 2014 into arguably the best linebacker in college football. The key asset that the Ohio State coaching staff will depend on from the Georgia native in 2016 is veteran leadership for the two new starters alongside him, like Curtis Grant was for him in 2014.

Gareon Conley, DB — The only returning starter in the secondary has all the tools to be a shutdown corner in the Big Ten and was considered by many to be the best cover corner on a team that featured two defensive backs drafted in the first two rounds of the 2016 NFL Draft. His length and hand positioning gave secondary receivers nightmares last year and his form tackling and recovery speed puts him up there with some of the best physical defensive backs in OSU history.

5. Freshman Austin Mack will finish with over 800 yards receiving

The receiving corps will continue to carve out their individual roles throughout the start of the 2016 season, but one thing is clear.

Austin Mack is going to be a dangerous weapon for J.T. Barrett in the slot. The freshman — who enrolled before spring camp — had an excellent spring and fall, becoming the fastest player to lose his Black Stripe in March. He has all the physical tools to be a great wide receiver in the future. What makes him so valuable in 2016 is his hand-eye coordination and ability to make plays in the middle of the field.

The freshman won’t lead Ohio State in receiving, but he’ll play a major role in the passing game evolving in 2016.

4. J.T. Barrett will be a Heisman Finalist

There are no distractions for the Texas native recruited by Tom Herman. J.T. Barrett could go down as the greatest statistical quarterback in Ohio State history with a strong 2016.

If Ohio State finishes undefeated or in the playoff hunt, it will depend solely on J.T. Barrett having a career season as the veteran leader on this team. The junior is approaching Bobby Hoying’s records for passing touchdowns, pass completions, and 200-yard games and could pass them with a spectacular season.

3. Gareon Conley, not Jabrill Peppers or Jourdan Lewis, will match Iowa’s Desmond King as the best corner in the Big Ten

There isn’t a stat to back up this prediction, just what is seen on game tape. Jourdan Lewis is a high-level corner but has had a tendency of getting burned on deep plays in the past. It’s also hard to praise a defensive back/linebacker with only one interception in his career.

Outside of that, Conley has some of the best hand-positioning in the country and though he isn’t going to pick off 15 passes in a season, he definitely will put himself in contention to be an All-American.

2. Curtis Samuel and Mike Weber will rush for over 2,000 yards

Urban Meyer has to be smiling as everyone focuses on his team’s passing game and proclaims that things need to change in that aspect of the offense for his team to be contenders. The truth of the matter, though, is that Meyer and Ed Warinner’s offense dictates games through the running game.

First, it was Carlos Hyde pounding defensive lines and setting up speedy play-makers around him. Ezekiel Elliott picked up that torch and lit defenses on fire with his versatility.

While some are concerned that Ohio State doesn’t have a traditional bell cow to go to, the coaching staff is excited to unleash two of the most dynamic runners in the country on opposing defenses. Mike Weber and Curtis Samuel both have unique skill sets that compliment each other well. They will be heavily counted on — especially early in the season as the offense tries to find its identity.

All it takes is a win over Oklahoma to jump-start the Buckeyes into the conference season and a victory over an improved Michigan team that only lost three games last season.

With teams like Florida State, Michigan, Clemson and week three opponent Oklahoma returning so much talent, it’s hard to predict that Ohio State’s youth will instantly translate to wins. However, recent Buckeye history suggests that it’s a distinct possibility that this team could ascend their lack of experience and make a run at the national championship.