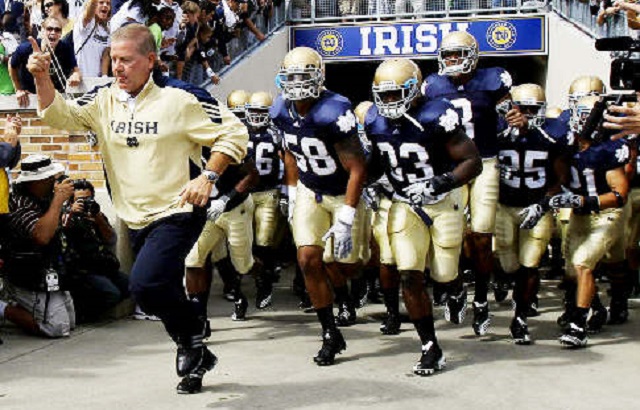 1 Burning Question: Who starts under center for the Irish?

Heading into this season, Notre Dame has two formidable options at quarterback: Malik Zaire and DeShone Kizer. Yet even with its season opener just 20 days away, head coach Brian Kelly has caulked up his lips over the biggest dilemma for his team going into the matchup with the Texas Longhorns on Sept. 4.

“We know where we’re going to go with this offense,” Kelly said. “It’s not going to be so different one way or the other, and the locker room could care less. They know they are both really good, so there won’t be any controversy.”

Since Kelly clearly isn’t willing to spill a lick of information, let’s breakdown the two possibilities.

If not for a broken ankle in Week 2 versus Virginia last campaign, Zaire probably receives the starting nod automatically. Prior to the injury, the now-redshirt junior posted 428 yards through the air, along with four touchdown passes. Additionally, he picked up 93 yards on the ground. Against Texas, Zaire was exceptionally accurate, completing 19-of-22 passes for 313 yards and three scores. Hence, the 6-foot, 225-pounder displayed an ability to consistently frustrate defenses, especially through the read-option.

On the other hand, Kizer played extremely efficiently in Zaire’s absence. The now-sophomore passed for 2,884 yards and 21 touchdowns, while adding another 10 scores with his feet. Plus, the then-freshman only threw 10 interceptions. Although he might be a tad more agile than Zaire, exhibited by his 17-carry, 143-yard performance versus then-ranked No. 25 Temple, Kizer showed a willingness to stay in the pocket, too. In Notre Dame’s win over Pittsburgh, the Toledo, Ohio native completed 73.1 percent of his passes and tallied six total touchdowns.

While Zaire has started three games in his career to Kizer’s 11, Kelly stated their experience won’t help determine the eventual starter. Moreover, the offensive line retains three of its best from a campaign ago, including left tackle Mike McGlinchey and left guard Quentin Nelson, who have the most reps of the group. Therefore, protection shouldn’t cause concerns for either quarterback.

The next two and a half weeks will provide fans with plenty of answers about who handles the snaps come Week 1.

-6 — Notre Dame’s turnover margin last campaign (tied for No. 102 among FBS schools). Last season, the Irish garnered just 14 turnovers, compared to 23 in 2014. Thus, defensive coordinator Brian VanGorder’s bunch needs to exhibit more hunger on that side of the ball. With cornerback KeiVarae Russell, who led the team with four forced turnovers (two interceptions and two forced fumbles) departing for the NFL, VanGorder lacks a ballhawk. His counterpart Cole Luke could represent a piece of the solution to the evident area of uncertainty, picking off two passes as a junior.

On top of that, in their three losses to Clemson, Stanford and Ohio State, the Irish accumulated seven turnovers to their opponents’ two. Therefore, second-year offensive coordinator Mike Sanford must also place an onus on his unit to hang onto the pigskin.

96.8 — Wide receiver Will Fuller’s receiving yards per contest in 2015 (No. 16 in the nation). Fuller developed into one of the top wideouts in the country, reeling in 62 catches for 1,258 yards and producing 14 scores. Of the remaining receivers left on the roster, the next highest touchdown total was a mere two by Torii Hunter Jr., who compiled 363 on 28 grabs.

Even though those numbers don’t pop out, the two-sport athlete could follow the a similar path to Fuller’s. The now-Houston Texans receiver went from six receptions as a freshman to 76 the next year. Hunter’s expected development from the offseason will be crucial for Notre Dame’s College Football Playoff hopes.

Why it matters: For the first time in 18 seasons, the Longhorns squared off against the Irish and forgot to bring their ferocity, yielding 527 yards of total offense. With that being said, this campaign, Notre Dame shouldn’t expect another rout, as the Longhorns return a respectful backfield tandem of D’Onta Foreman (681 yards, 7.17 YPC) and Chris Warren III (470 yards, 6.62 YPC). Futhermore, Texas could be competing for head coach Charlie Strong’s job, placing extra incentive on a successful season. If the Irish open up 2016 with a loss in Austin, Texas, considering the remainder of their schedule, its dreams of competing in the CFP are toast.

Why it matters: The Spartans can no longer instill fear in opposing defenses with the recent graduation of Connor Cook, but their running game should scare the Irish. Running backs L.J. Scott and Gerald Holmes combined for 1,239 yards rushing and 19 touchdowns. Add that to the fact that VanGorder’s unit placed No. 87 in Division I in allowed yards per rush (4.6 YPC) in 2015, and head coach Mark Dantonio’s game plan is simple: pound the rock.

Moreover, whoever starts at either quarterback Tyler O’Connor or Damion Terry might be able to take advantage of an aggressive front-seven, as the Spartans develop signal callers fairly well. A win over a youthful squad should seal the non-conference slate up with an undefeated mark.

Why it matters: The Cardinal stunned the Irish a campaign ago, knocking down a field goal as the time expired. Seeing that Stanford returns the No. 2 rusher from 2015 in Christian McCaffrey, VanGorder’s crew will once again be tested to slow down one of the premier players in college football. In their previous matchup, it held McCaffrey to 94 yards on 27 carries (3.5 YPC), awarding some confidence to the group for this season’s meeting. Topping one of the elite programs in the country would obviously aid Notre Dame’s chances of playing in the Fiesta or Peach Bowl.

Malik Zaire/DeShone Kizer, QB — Sadly, after reading this far, Kelly still hasn’t penciled in his starter. Likewise, sophomore quarterback Brandon Wimbush is in the wings, waiting for his crack at the job, too. His opportunity won’t come until the next campaign, but whoever gets the starting nod between Zaire and Kizer should prepare himself for a tight leash, as Kelly won’t be afraid to brew up a fresh look on offense if either one struggles. Notre Dame requires as solid a performance from the position as last season in order to earn 10 or 11 regular season victories.

Tarean Folston, RB — The tailback’s junior campaign lasted only three carries, as he tore his ACL against Texas in the opener. In the sophomore season, though, Folston looked uncontainable, gashing defenses for at least 100 yards in four of seven contests. The 5-foot-9, 214-pounder proved he could act as a bruiser, too, churning out 73 yards on 21 carries in the Notre Dame upset win over LSU in the Music City Bowl. Overall, Folston’s holds an impressive 5.2 yards per carry sits in his career in South Bend, Indiana. If he stays healthy, good luck stopping the Irish’s rushing attack.

Josh Adams, RB — Yes, there’s more to Kelly’s backfield. The then-freshman took off once Folston went down, helping Notre Dame punish opposing defenses on the ground. The Irish ranked No. 27 in Division I in rushing yards per game (207.9), and the 6-foot-1, 219-pounder manufactured 7.1 yards per attempt. In three of the team’s final four regular season contests, Adam supplied more than 140 yards, including a 168-yard showing versus Stanford (9.3 YPC). Like Folston, Adams is brawny, but he’s elusive as well, burning Wake Forest for a 98-yard score. He’ll undoubtedly enter this season improved, which should frighten opponents.

Isaac Rochell, DE — Following stud linebacker Jaylon Smith’s departure, Notre Dame desires a stable force on defense. Enter Rochell, whose 6-foot-3, 290-pound frame breathes sturdiness. Although he only recorded one sack last year, he’s very reliable against the run, gathering 7.5 tackles for a loss, along with 63 total stops. As a unit, the Irish finished No. 45 in total defense, leaving room for upgrades, especially in the turnover department. If Rochell can assist in forcing opponents into mistakes, he’ll aid his draft stock, too.

5. Notre Dame fails to dramatically boost its forced turnovers from a year ago.

Even with talented playmakers in the secondary, such as safety Max Redfield and Luke, the Irish’s defense won’t take a big leap from its 14 takeaways in 2015. Furthermore, opponents with a dynamic backfield — such as Miami and the rest of the aforementioned foes — will be able to keep the ball away from an explosive offense.

4. Kizer wins the quarterback competition and holds off Zaire for the entire season.

Notre Dame’s offense shouldn’t concern Kelly too much this campaign. Coming off his a strong presentation as a freshman, Kizer will reap the benefits of a mighty backfield and lead the Irish to a top-15 offensive attack, along with hovering around 30 passing touchdowns. Unfortunately, Zaire’s potential under Kelly will be held back due his injury last season.

3. The Spartans knock off the Irish.

Similarly to their previous matchup, MSU wins a tightly contested affair with Notre Dame, bringing fans in South Bend back to reality after a quick 2-0 start.

As an outstanding athlete, Hunter allows the Irish faithful to breathe sigh a relief about its receiving core and then some. After beginning to discover a rapport with Kizer towards the tail end of 2015, catching four passes for 52 yards versus Ohio State, the Prosper, Texas native becomes a household commodity this campaign.

Excluding the Irish’s run to the BCS National Championship Game in 2012, Kelly’s record at the historic institution stands at 43-22. He’ll avoid the hot seat, but the program must improve in 2017.