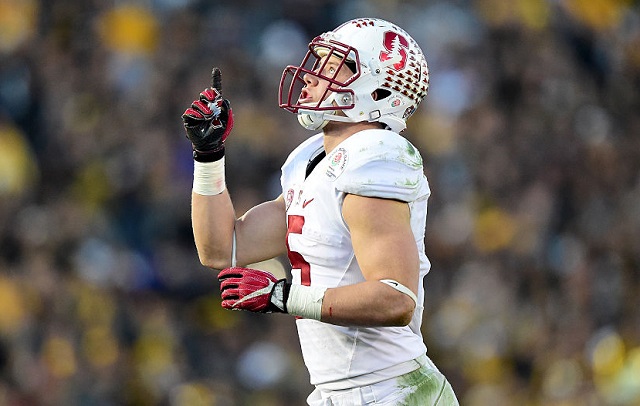 Ever since the reigns of the Stanford football program were turned over to David Shaw, the Cardinal have been scary good. In his first season in 2011, Shaw took the team to an 11-2 finish (including 8-1 in the conference) and a Fiesta Bowl birth. Some thought he was just doing this with Jim Harbaugh’s players.

Fast forward to 2015, and the Cardinal put up a 12-2 record (inlcuding 8-1 in the conference) and a Rose Bowl win. Stanford has been consistently excellent under Shaw. They had a one-year drop off where they went 8-5 in 2014, but proved they were back in 2015 with the Rose Bowl win.

In Shaw’s five years, his team has amassed a record of 54-14 overall and 36-9 in the conference. During his tenure, Stanford has three conference titles in five years.

How does Shaw do it? It starts with defense. Up until 2015, Stanford had placed either first or second in total defense every year during his tenure. Last year, the Cardinal dropped to third (they were only two yards per game behind Utah). Stanford not only does a great job of preventing teams from gaining yardage and sustaining drives, but also keep opponents from scoring. From 2012 to 2014, Stanford was first in the league in scoring defense, holding opponents under 20 points per game. Last year, they allowed 22 per game, which was good for third in the league.

In addition to having a great defense, Shaw fields a consistent offense. The offense is usually near the top of the conference in third down conversions (first in 2011, 2013, and 2015). In 2015, they also did a great job of scoring touchdowns once in the red zone (second in the conference behind USC). Stanford doesn’t turn the ball over very much (second in turnovers in 2015 with 13), which keeps the defense from being put in bad situations. The offense isn’t sexy, but it does the job. And with Christian McCaffrey on the roster, it should continue to do the job this season.

12 — In Stanford’s two losses in 2015, they lost by a total of 12 points. Stanford was closer than you think to a spot in the College Football Playoff. They slipped up early to Northwestern and then lost a nail-biter late to Oregon.

50% — This is the rate at which the Stanford offense converted third downs in 2015. Stanford is not thought of as a team that has a great offense. However, they do many things well. By converting 50 percent of their third downs last season, they were able to sustain drives and keep their defense fresh.

Why it matters: This is a very early-season, big-time conference game for the Cardinal. The Pac-12 South will be a tight division, but the Trojans are likely to come out as the best team, which means this is a game Stanford must win. The Cardinal and Trojans face off in just the second game of the season for the Cardinal. It’s important for David Shaw and his team to establish early in the year that they will be the bully again this season.

Why it matters: Barring a surprise, the Fighting Irish will likely be the best team Stanford plays in 2015 (at least during the regular season). While this is not a conference game, it is of vital importance in the race to the College Football Playoff for both teams. At this point in the season, Stanford would have already played Kansas State, USC, UCLA, Washington, and Wazzu. If the Cardinal can survive that early-season gauntlet, it would be a shame to see them fall to the Irish.

Why it matters: As of late, the Pac-12 North has been a toss up between Oregon and Stanford. Wazzu and Washington are catching up, but this year will likely still be between the Ducks and the Cardinal for the crown. Oregon ruined Stanford’s shot at the College Football Playoff last year, the Cardinal will be out to make sure that doesn’t happen again.

Christian McCaffrey, RB – McCaffrey finished second in the Heisman voting in 2015 with 290 first place votes. He ran for over 2,000 yards in 2015. He caught 45 passes. He threw two touchdown passes. He had a kickoff return for a TD. He had a punt return for a TD. He is the heart and soul of this Cardinal team, and they are in pretty good hands with him as their best player.

Keller Chryst, QB – Kevin Hogan quietly had a very good 2015 season. He completed 67 percent of his passes and threw 27 TD against only 8 INT. Chryst has a lot more talent than Hogan did. The major question will be how quickly he can adjust to the speed of the college game and how well he lets the game come to him. If Chryst plays within himself and uses the tools at his disposal, Stanford could be headed for great things

Peter Kalambayi, LB  – The linebacking corp of Kalambayi, Mike Tyler, and Joey Alfieri should be the strength of the defense. Kalambayi had 4.5 sacks in 2015 and should have more in 2016, if the overall play of the defense allows the coaching staff to free the linebackers up for more blitzing.

Soloman Thomas,  DE – As a freshman, Thomas had 3.5 sacks and 10 tackles for loss.  With a year under his belt, Thomas understands the system much better and will emerge as a leader on the defense.

5. Stanford will lose just one regular season game in 2015

Stanford is a highly talented and very balanced team. It knows how to win and has a coach that can take it to the highest level. Their schedule, though, is an issue. Stanford has one of — if not the — toughest schedules in college football through the first six games. Stanford will have one slip up during that stretch, but it will be their only slip up in the regular season.

4. Stanford will avenge their loss to Oregon

Oregon is the biggest game on Stanford’s schedule because they fight back and forth for the Pac-12 North crown. This year, the Cardinal will avenge their 2015 loss to the Ducks, keeping them in prime position to have a championship season.

3. Christian McCaffrey will once again be the runner-up for the Heisman Trophy

McCaffrey is a fantastic player and will be in the contention for the Heisman for the entire year. The problem? The Heisman pool is just too deep this year. Leonard Fournette, DeShaun Watson, Nick Chubb, Baker Mayfield, Samaje Perine, Dalvin Cook, and the list goes on and on. McCaffrey will have another fantastic season and will be in New York for the announcement. Unfortunately for Stanford, he will not win.

For the fourth time in six years, Stanford will win the Pac-12 Championship. David Shaw is quietly putting together a dynasty on the west coast.

Our overall ranking doesn’t indicate that Stanford has a great chance for the College Football Playoff. The biggest reason for that? Their schedule is brutal. I predict that Stanford will survive that schedule and will make the final four this college football season.