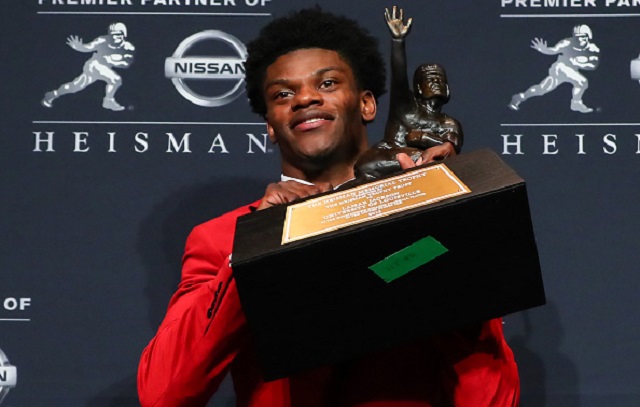 When an emotional Lamar Jackson slowly walked onto the PlayStation Theater stage in Manhattan, he embraced the moment more than his accomplishment. The 19-year-old sophomore had just entrenched himself as the youngest player to win the Heisman Trophy, yet he still desired to meet each of the past winners who attended the event. One of them was former Florida Gators quarterback Tim Tebow.

During Tebow’s sophomore campaign in Gainesville, he became the first QB in FBS history to throw for 30 touchdowns and rush for another 20 scores. After his astounding regular season, Jackson placed his name next to Tebow’s, along with ex-Auburn QB Cam Newton’s (2010), as the only signal callers to accomplish the feat. All three of the elite collegiate athletes went on to win the Heisman Trophy in the same year.

Beyond the impressive mark, Jackson notched a couple other notable accolades in 2016. The 6-foot-3, 205-pounder set an ACC record for total touchdowns (51) and was the first Cardinal to ever win the Heisman. Prior to Jackson, defensive end Elvis Dumervil, who previously represented the school’s lone top-10 contender for the award, finished 10th in 2005.

“I can only imagine what he’ll do [next season],” fellow Heisman finalist Jabrill Peppers said of Jackson, via the New York Daily News. “He’s phenomenal now. It’s just scary.”

Before we shut the book on Jackson’s staggering performance, let’s remember the best five plays from his Heisman Trophy-winning season.

Although Louisville (9-3, 7-1 ACC) fell short in a six-point loss to Clemson, Jackson provided plenty of thrills throughout the contest. Overall, he produced 295 passing yards, 162 yards on the ground and three total touchdowns, aiding the Cardinals’ 18-point comeback to begin the second half. Yet his best maneuver came when head coach Bobby Petrino’s bunch led 29-28 in the fourth quarter.

Once the pocket essentially collapsed, tight end Cole Hikutini fled near the right sideline (seen at the 9:15 mark of the above video). Many quarterbacks would lob a safe pass to him and likely fall short of the 6-foot-5, 248-pound weapon due to the incoming heat. Nevertheless, after his first two initial reads were blanketed, Jackson took off for a 38-yard gallop against the No. 20 rushing defense in the nation.

Moreover, rather than attempting to shoot up the middle, the South Florida native recognized a larger gain could materialize if offensive lineman Kiola Mahoni held his block for long enough. Imposing speed tends to emerge as Jackson’s No. 1 physical trait, but both his vision and patience allows for that to manifest.

In the Cardinals’ opening game of the season, Jackson began his push for the Heisman Trophy, accounting for a school-record eight scores in the first half. No, that’s not a typo. On top of that, his fifth touchdown toss resembled one of the most splendid go routes he threw this season.

While wideout James Quick’s cognizance to tap both feet down stood out (seen at the 0:18 mark), Jackson’s precision loomed large. As a result of defensive back Ed Rolle’s hand placement, Jackson needed to deliver the football a smidge below his right glove. Somehow, he lasered a dart in-between the numbers for the 32-yard score.

Despite his underwhelming 57.6 completion percentage (No. 80 in Division I) during the campaign, Jackson’s accuracy was dazzling on this particular throw nonetheless. For him to expand his repertoire, the aforementioned number could use a boost in 2017.

Picture Jackson as a running back in the first clip? You’re not alone. In fact, many programs passed on the dual-threat magician because of concerns with his presence under center. Those coaches are probably sobbing in their sleep these days, but Jackson exhibited tailback-like skills on numerous scampers, including his 61-yard dash versus Kentucky in the regular season finale.

From the outset, Jackson utilizes the read-option to squeak through a slight hole. He also managed to stiff-armed 303-pound defensive tackle Adrian Middleton in the process. Subsequently, his cutback at the 29-yard yard line (:30) provided him the opening to splurge for a monster gain.

Furthermore, his sturdy balance is apparent at Louisville’s 45-yard line (:34), where he almost stumbled via a would-be ankle tackle. That didn’t halt Jackson from reaching another gear once he hit the second level, creating additional space 15 yards later. If not for cornerback Chris Westry, who sprinted to the ideal angle to the ball as the play ensued, Jackson would’ve celebrated another rushing touchdown.

Amazingly, Jackson placed No. 8 in the country in rushing yards (1,538), verifying his utter dominance on the ground.

Considering Louisville’s No. 5 ranking in the AP Top 25 Poll for Week 9, Jackson and his unit desperately needed a late comeback victory in Scott Stadium. He eventually delivered, marching the Cardinals on an eight-play, 75-yard drive in under two minutes. Even though the signal caller would throw for a two-point conversion as well, his final completion on the stat sheet was ironically his finest.

Sitting outside the red zone, offensive coordinator Lonnie Golloway decided to catch the Cavaliers’ defense off-guard. Without safety help, the play-caller dialed up a timing route, where Jackson was obliged to deliver the ball to the right side of the end zone, regardless of wide receiver Jaylen Smith’s positioning. Without an accurate throw, the play becomes moot.

Well, he lobbed a beauty, which landed an inch above the outstretched fingertips of safety Juan Thornhill for the 29-yard touchdown strike. Smith even had a split second to adjust perfectly to the throw. Considering the pressure of the situation, Jackson’s pass deserves an extra round of applause, too.

Amid a contest in which Jackson posted an ACC-record 610 total yards in a 62-28 romp over Syracuse, he also presented the nation with an unfathomable display of athleticism on just one nine-yard carry. You’d expect nothing less by now, right?

Holding a 21-point cushion in the second quarter, Jackson ran the aforementioned read-option and bolted towards the edge. However, 5-foot-11, 183-pounder cornerback Cordell Hudson seemed to stand at the right spot to impede his forward progress (seen at the 0:16 mark above).

Applying a sound tackling technique, Hudson dove low. However, Jackson was a step ahead, performing a hurdle that was illegal in his high school days to leap free for the score. It was the shortest play of the bunch, but unless an invisible springboard was underneath him, his hops win out.