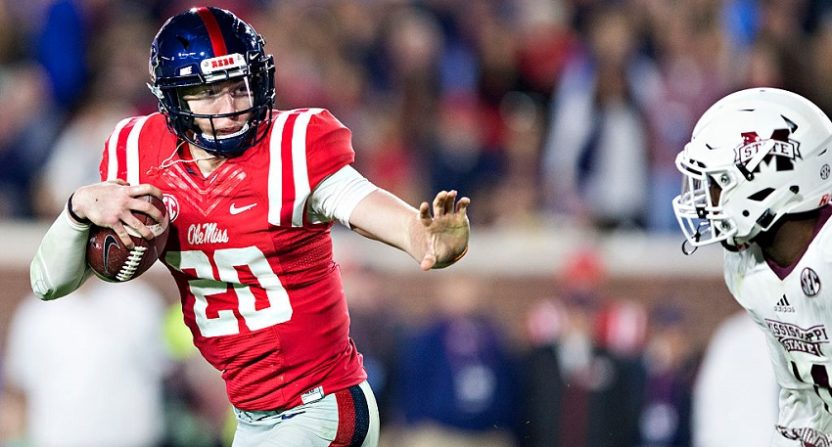 The Comeback’s college football preview coverage continues with the next team in our Top 50 countdown, the Ole Miss Rebels. We’ll move up the list each day, leading up to the beginning of the regular season.

It’s not exactly the glory days for Rebel football. After an unseemingly long NCAA investigation, notice of allegations were handed down by the powers that be in February of this year, and it isn’t good. Trying to get in front of it, the administration has self-imposed a postseason ban for this year and awaits further findings and announcements of penalties. Hugh Freeze has also been sent packing. You have to believe the storm clouds are just now rolling into Oxford as this whole thing gets unpeeled.

With that in mind, we try to do the best we can to pull back the layers of what’s ahead for Ole Miss in 2017. It can be a Mount Everest expedition to try and motivate a team that has no post-season carrot at the end of it all, so we’ll have to wait and see if the talent that’s still on board has the pride and fortitude to come out and give it their best each week.

2016 was not a banner year for the Ole Miss program. With an NCAA investigation threatening doom and despair, there seemed to be a loss of focus on the field. The team struggled out of the gate, losing after holding large leads in two out of its first three games, and could never capture the competitive spirit of the previous few seasons under head coach Hugh Freeze.

The high point of the season was a 48-28 win over Mempis that vaulted the Rebels to a 3-2 record with a game at Arkansas looming. In that five game stretch the Rebels lost a close one to Alabama, and disposed of then No. 12 Georgia 45-14. Things looked pretty good. And then the wheels fell off.

Unable to stop anyone on defense consistently, the team lost five of its last seven games, including an over easy appearance in the Egg Bowl where Ole Miss got scrambled to the tune of 55-20. The Rebels were unable to string together more than two wins in a row all season. Alas, they sat on their couches for bowl season.

The Rebels signed the twelfth-best recruiting class in the SEC according to 247 sports.com — a far cry from the blistering success of recent recruiting hauls. The class contained just three four-star recruits, including wide receivers D.D. Bowie (131) and Chester Graves (233), and inside linebacker Breon Dixon (259). There is still talent in this group, but there might need to be some significant development to make the best of a class that is clearly suffering from the reality that goes along with the paranoia and hysteria over NCAA sanctions and coaching uncertainty.

We explain how Ole Miss's rush defense is so bad it breaks the S&P+ rankings system:https://t.co/iUtbHrZb5I @SBN_BillC @fboutsiders

246.3 – The yards per game rushing given up by the Ole Miss defense, ranking it 200 out of 208 teams in FBS. It’s not like the secondary was lights out either, but when you play in the SEC, you had better stop the run against some of the more physical teams on the schedule. That didn’t happen more often than not, and as a result, the defense wore down as the season went on. And when you can’t get the other team off the field, the offense has less opportunities to outscore the opponent and begins to press. The resulting penance amounted to the aforementioned 2-6 conference record.

94 –The percentage of stops in the red zone for the Rebel defense last year. A Hugh Freeze coached team has never been one to gobble up time of possession on offense, but it didn’t matter much when the D was flying around and getting stops. There was a huge decline from 2014 (11th) to this past season when the team was the 3rd worse in all of FBS. Look for new defensive coordinator Wesley McGriff to install a more basic, attacking scheme to try and make an improvement in 2017.

95.7 – The percentage of field goals made by placekicker Gary Wunderlich. A semi-finalist for the Lou Groza award that goes to the best kicker in the nation, Wunderlich was as solid as they come in getting three points on the board. After his only miss of the season — a measly 55 yarder against Georgia — he went on to make 17-straight to end the season. He was the nation’s No. 1 kicker coming out of high school in 2014 and the Rebels may need his heroics to have a shot at a winning SEC campaign this year. Oh, and he also punts folks.

Why it matters: The Egg Bowl is always the big one at the end of the schedule, and this year it may be even bigger. With no shot at the postseason because of the self-imposed ban, this will be sold as the team’s bowl game. It’ll also be the final game for the seniors and early departures to the NFL. The schedule sets up nicely to have a bit of a bounce back year in 2017, but this will be the one everyone circles on the calendar after getting run off the field last year at home.

Why it matters: Not to bang the same drum over and over again, but when there is only pride on the line, there has to be one huge win to make the season feel like a success. Yeah, the Egg Bowl speaks for itself, but what better way to make a memory in 2017 than slaying the Alabama dragon at its place. It’ll be a tall order, but there are plenty of players on the Ole Miss roster that have played with, and beat the Tide over the last three years. The Rebels would love nothing more than to do it again, especially with where the culture of the program is today.

Shea Patterson, QB – Kelly was great, but Patterson is the next big thing in Oxford. Many recruiting types had the 6-foot-2, 200-pound sophomore as the most sought after QB recruit in the 2016 class. He has an accurate and lively arm, and is adept at keeping plays alive with his feet when all else breaks down. In fact, No. 20 has a lot of Johnny Manziel in his game, and with a veteran offensive line he should get time and space to operate. Patterson gives this year’s Ole Miss team a shot at ruining the season of one of the big dog’s in the conference.

Marquis Haynes, DE – Haynes could have declared for the NFL Draft but decided to come back for his senior season. As bad as the defense was a year ago, it wasn’t because of the efforts of the 6-foot-3, 222-pound talent out of Jacksonville. Haynes totaled 53 tackles, including seven sacks and eleven tackles for loss. He’s not the biggest guy, but is a prototypical speed end rusher that should have a huge year again in 2017.

Jordan Wilkins, RB – Wilkins was supposed to be the co-starter in 2016 but was ruled academically ineligible just prior to the season. He’s back for his senior season, and if the offense is really going to hum with new quarterback Shea Patterson, it’ll need to get a little more out of the running game than it did in 2016. He won’t need to set the world on fire, but it would be nice to have 900 to 1,000 yards from him to give balance and flexibility to an offense that needs to get back to 2015 levels.

Ole Miss will knock off an SEC West contender. I don’t know if it’ll be on the road at Alabama or Auburn, or at home against LSU, but the Rebels are going to outscore one of them to throw a big monkey wrench in the sweet tea of the West Division. The offense has the potential to be that good, and we see it happen every year in college football.

Interim Head Coach Matt Luke will finish with a winning record . Freeze is out, and Matt Luke inherits a bigger mess than a dumpster of diapers. Still, there is talent on this team, and he’ll get everyone to rally around the notion that it’s Ole Miss against the world. And that’s enough to play for. Shea Patterson will be fantastic and the defense will do enough for a winning campaign.

Shea Patterson will be the best quarterback in the SEC. Yeah, I know Jalen Hurts is ready to produce a sequel in Tuscaloosa, but Patterson is the real deal. He’ll make everyone forget about Chad Kelly and be an all SEC performer in his first year as a starter.