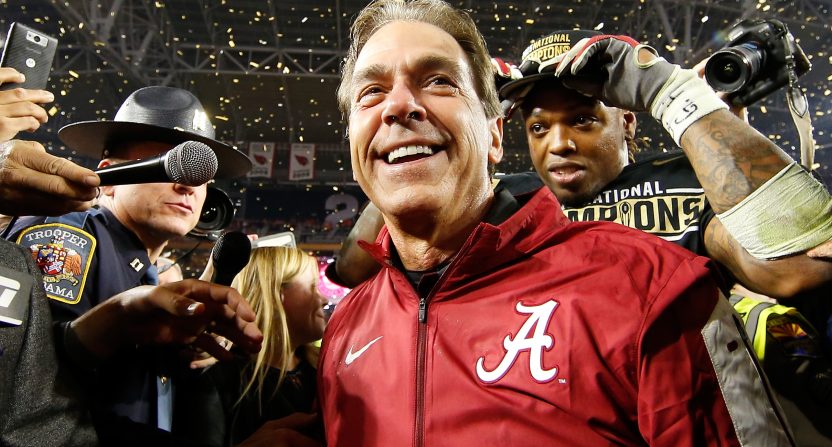 We have finally arrived at the end of our Top 50 college football countdown. As we bring this countdown to a close, we take a look at the No. 1 team in our rankings for the 2017 college football season, the Alabama Crimson Tide.

Stop me if you have heard this before, but Alabama has a chance to be a really freaking good college football team this season. No, seriously. They do!

All kidding aside, Alabama head coach Nick Saban has put together a masterful plan of attack to build a dominant force and he continues to annually keep things chugging along. No matter how many players Alabama has to replace, they have the recruits and players ready to step in and take on whatever role is asked of them. Two years removed from a national championship now, the Crimson Tide look equipped to end the title drought in Tuscaloosa, of which fans of every team are envious.

It was business as usual for the Crimson Tide in 2016. A program that has been built to expect national titles came close to repeating as national champs in a rematch against Clemson in the College Football Playoff national championship game.

The season started off against a USC team that would look much better at the end of the year than they started, but the season-opening rout of the Trojans was important because it was the emergence of Jalen Hurts as the starting quarterback for the Tide, pushing aside Blake Barnett and Cooper Bateman on the depth chart for good. Alabama also turned aside a recent nemesis of theirs, Ole Miss, and then proceeded to bury every one of their opponents on a march to another SEC title and the top spot in the College Football Playoff.

Nick Saban has built a program that recruits at a level few programs could even sniff. Alabama just hauled in another top-ranked recruiting class with six five-star players and 18 four-star players. That is an absurd number. You may not see any of those players have an impact right away, although it may not take long for linebacker Dylan Moses to leave his mark. The quarterback of the future may actually be dual-threat Tua Tagovailoa from Hawaii. Look for him to step in after Hurts down the line.

Why it matters: Honestly, it may not mean a whole lot at the end of the season other than for playoff seeding. Some might consider this a preview of the national championship game, which will just so happen to be played in the same stadium in Atlanta at the end of the year, but the truth is the loser of this game still stands an excellent chance to reach the College Football Playoff. But it matters because the margin for error will be reduced with a loss. Alabama at 13-0 or 12-1 is essentially a lock for the playoff, but where would a 2-loss SEC champion Alabama stand in the pecking order if other conferences have undefeated or one-loss candidates for the playoff?

Why it matters: Alabama is expected to roll through the schedule and play for the SEC championship, but watch out for Auburn. If the Tigers get the offense going with Jarrett Stidham at quarterback, then the Tigers could pull an upset bid at home against their top rival in the final game of the regular season. And if the SEC West does come down to a tie-breaking scenario, the head-to-head matchup would be on the line.

Bo Scarbrough, RB – Alabama’s depth at running back is so silly, so don’t expect Bo Scarbrough to pile up an insane amount of rushing yards as he may split playing time with Damien Harris out of the backfield. But look for Scarbrough to be the running back more likely to be relied on in the clutch when Alabama needs to run the ball.

S Minkah Fitzpatrick – Alabama’s safety may be the best in the nation, and NFL scouts will be watching closely. Fitzpatrick will be around the ball any time it goes through the air, and he’ll be ready to level the receiver once he gets his hands on the ball. Fitzpatrick also led Alabama with six interceptions last season.

DE Da’Shawn Hand – Alabama’s defensive line loses Jonathan Allen this year, but that just leaves a spot for Da’Shawn Hand to prove he is worthy of being considered among the top defensive ends in the nation. Watch out for him off the edge, because he should be active.

Alabama takes the loss in Week 1 against Florida State, but rambles their way through the rest of their schedule unfazed to return to the playoff for a fourth consecutive season. The defense pitches three shutouts along the way, including one against LSU to put Ed Orgeron’s fate on a bit of a hot seat in Baton Rouge. And the Crimson Tide once again play for the national title, and talk about Nick Saban stepping into retirement begins to hear up (but he sticks around for some more in 2018).