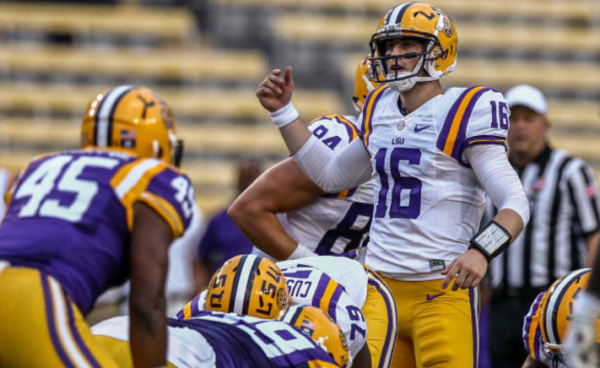 We’re closing in on the final 10 of The Comeback’s Top 50 countdown. As part of our 2017 college football preview, the list gets shorter each day, leading up to the opening of the regular season. Up next at No. 18, coach Ed Orgeron’s LSU Tigers.

LSU was one of the more talented teams in the country last year, and a lot of that talent is returning for 2017. The pieces are in place — possibly minus a quarterback — but the defense should be stout and the running game will be dominant even without Leonard Fournette (though his brother, Lanard Fournette, should see some playing time this year). I don’t know if this is the year that LSU can get over the Alabama hump, but the talent is there to keep it close. Then again, that talent has been there without success for the last five years.

Last season has to be divided into two parts: the four games with Les Miles as head coach (2-2) and the nine games under Ed Orgeron (7-2). Don’t let that early record fool you, though. LSU’s two losses were both incredibly close and against ranked teams — not to mention that the loss to Auburn was by less than a second. Even when LSU was ranked heading into November, it still felt like the firing of Miles may have been premature. We’ll see if that judgment bears out in the 2017 season.

Five-star safety JaCoby Stevens is the highlight of this class, but this is still an incredible class for Ed Orgeron to pull in after his first not-even-full season as head coach. Then again, the worst class that Les Miles had since 2013 was 6th. We’ll see how Orgeron can recruit at LSU in future years (assuming he’s coaching then), but matching what Miles did is a very tough ask.

233.1 — LSU’s rushing yards per game in 2016. Between Leonard Fournette and Derrius Guice, the Tigers had a strong rushing attack last year. The offensive line was a force and, except against Alabama, pushed this strong attack through every defense that it faced.

190.1 — LSU’s passing yards per game in 2016. This stat sticks out even more than the rushing yards stat, but only when the two are compared. The only teams that should expect to run for more yards than they throw for are those that run triple-option offenses. LSU has all the talent in the world, but that doesn’t help without someone competent throwing the ball.

314.4 — LSU’s opponents’ total yards per game in 2016. On the other hand, this stat shows why having an ineffectual offense might not even matter. With a defense so dominant, the lack of a passing game won’t matter so much. The Tigers need to keep the defense this strong if they want to make up for the lack of a stable and consistent offense.

Why it matters: This is obvious. It’s the first game that is circled on LSU’s schedule just about every year, and for good reason. If the Tigers want to win the SEC, the road goes through Tuscaloosa. If the Tigers want to be able to win a national championship again, the road goes through Tuscaloosa. Alabama is the team to beat in the SEC and probably in the country. LSU might lose a different game or two, but the success of this season will rest solely on whether the Tigers can beat Alabama.

Danny Etling, QB: Etling needs to take a major step forward in 2017, especially if he wants to beat Alabama. LSU might be able to beat just about everyone on its schedule with a decent game manager manning the offense, which is what Etling seems to be. But to beat Alabama requires the ability to move the ball through the air, or to at least keep the defense honest by being able to throw over the top. The ability to beat Alabama starts and ends with Etling’s–or whoever has replaced him by November’s–ability to throw.

Arden Key, DE: Key recorded an incredible 11 sacks last season. He is a stalwart on the defensive line who keeps on getting better and better. At a slim 238 pounds, Key can play linebacker too when necessary. He is versatile and leads what should be one of the absolutely best defenses in the country.

Derrius Guice, RB: As much as the offense needs success from Etling (especially against Alabama), it needs Guice more. This team will always be run-first, no matter how much balance the passing game is able to provide. Any decent running back can find success behind LSU’s incredible offensive line, but a truly elite running back like Guice can have a Heisman-worthy season if he achieves his full potential.

There’s only one bold prediction possible of necessary for LSU: 2017 is the year that the Tigers finally beat Alabama.