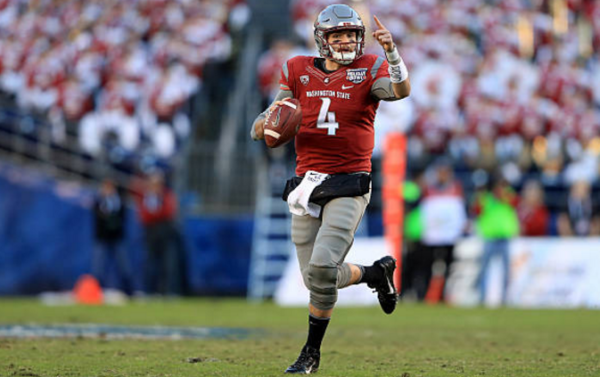 We’re now past the No. 20 mark in The Comeback’s Top 50 countdown! As part of our 2017 college football preview, the list gets shorter each day, leading up to the opening of the regular season. Up next, the Washington State Cougars.

Pullman, Washington will be abuzz with excitement as this college football season approaches, and with good reason. For a school that has seen far too much futility for far too long, Mike Leach is bringing some success and consistency. His “air raid” offense is winning games out West, and he has record-breaking quarterback Luke Falk returning to lead it. The defense isn’t spectacular, but it is improving and doing what is necessary to win games. This program is still on its way up, and fans deserve to be excited — for now, at least.

The season started off disappointing, to say the least, with a loss to FCS Eastern Washington. As FCS losses go, Eastern Washington really isn’t a bad one — the Eagles are a quality program and consistently compete for FCS titles — but most fans don’t look deeper into the “FCS loss” and assume that all such losses are really bad ones.

That was followed by a close loss to Boise State, but the Cougars hit their stride after that. They rattled off eight straight wins, including demolishing Stanford on the road. Late losses to Colorado and Washington were nothing to sneeze at, but the bowl loss to Minnesota was definitely a low note to end on. Still, the season was an overall positive, which is a welcome development for this program.

The one 4-star in this class, receiver Jamire Calvin, probably won’t make an immediate impact on the program. In an air raid-style offense, athletic wide receivers who can fit in the system are important, especially considering that the Cougars have a healthy stable of young quarterbacks to fight for the position once Falk leaves the program.

10,888 — Luke Falk career passing yards. This doesn’t particularly matter, other than to highlight the fact that Falk just throws for a ton of yards. Unless there is an injury or something catastrophic, he has a real chance to pass Ty Detmer for fifth place on the all-time passing yards list, and possibly even Graham Harrell for the fourth spot.

51.1 — Pass attempts per game in 2016. This stat speaks for itself. Washington State throws the ball a lot. This is a more pass-heavy air raid than Leach ran at Texas Tech. The Red Raiders used to rely on a little bit of balance to keep defenses honest. At Washington State, the offense relies on its line and its talented receivers to move the ball through the air, even once defenses expect it.

5.0 — Sacks by star defensive end Hercules Mata’afa last year. Mata’afa was a menace in opposing backfields last year and a big reason for Washington State’s real success on defense. If he can replicate that success this season, the Cougars will be in good stead throughout 2017.

The easy choice for this section is the Apple Cup against Washington, but the season will either be made or broken by then.

Why it matters: The game against USC is a likely loss. The game against Boise State should be a great game, but not too much will hinge on it. This is a pivotal moment in the Cougars’ season. Washington State can reasonably swing anywhere from 6-6 to 10-2 this year. The game against Colorado will be a tremendous indicator of how the Pac 12 season will go. A win–especially a relatively comfortable one, will put the Cougars a pretty clear step above the conference’s second-tier teams. They’ll still be behind Washington and USC, but the number three spot is up for grabs.

Luke Falk, QB: This has already been said, and it is clear. “Air raid” offenses often can live with a rotating set of quarterbacks who can replace each other, but Falk is a cut above the rest. He has all the tools and runs this offense to perfection. He’s not replaceable, and having him at the helm matters. A lot.

Hercules Mata’afa, DE: As mentioned above, Mata’afa anchors this defense and was a major factor in Washington State’s ability to stifle opposing offenses last season, especially the running games. If he can continue to dominate and lead a dominant defensive line, the Cougars should be able to slow down opposing offenses enough to outscore them in most games.

Jalen Thompson, S: One thing that Washington State’s four losses (other than Minnesota) had in common last season was that the defense got shredded through the air. The line held up the run pretty well and got some decent pressure on the quarterbacks, but the secondary got beat far too often. I don’t know if Thompson has the talent to anchor the secondary, but he’s certainly the best returning player from that unit. If he can’t lead the secondary to more success, then someone else needs to — because if no one does, teams are going to pick up a lot of yards through the air against the Cougars.

Predicting a Pac-12 North win might be too bold with a cross-divisional game against USC, but Washington State will win eight games for the third straight year, and will probably win 10 for the first time since 2003.

Another incredible blast for Shohei, who's just off one off the MLB lead.

Probably the biggest name on the list is Javon Wims, who was a seventh-round selection in 2018.

"Once the Blue Jays realized the card was missing, they sent a bat boy over to the Rays dugout to ask for its return. But the message back made a joke of the matter, saying something like, 'we can’t hit Robbie Ray anyway.'"

Bochy is exactly the veteran manager that a Padres team lacking leadership needs.

Another incredible blast for Shohei, who's just off one off the MLB lead.

Probably the biggest name on the list is Javon Wims, who was a seventh-round selection in 2018.

"Once the Blue Jays realized the card was missing, they sent a bat boy over to the Rays dugout to ask for its return. But the message back made a joke of the matter, saying something like, 'we can’t hit Robbie Ray anyway.'"

Bochy is exactly the veteran manager that a Padres team lacking leadership needs.