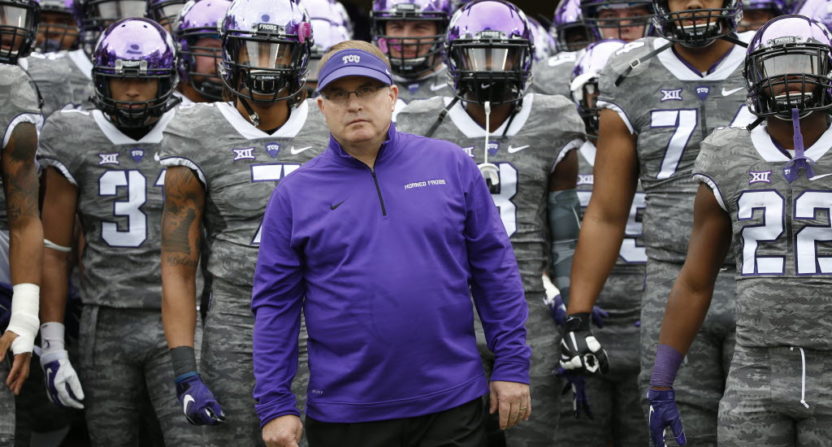 The Comeback’s Top 50 countdown continues with the TCU Horned Frogs. We’ll move up the list each day as part of our 2017 college football preview, leading up to the opening of the regular season.

TCU is looking to bounce back after a lackluster 2016 season. Gary Patterson had led his teams to Top 10 finishes in both 2014 and 2015, but without Trevone Boykin in 2016 things just didn’t click. (Then again, things weren’t clicking so well when Boykin missed some time with injuries in 2015, but that’s a separate discussion.) Still, TCU found its way into our Top 25 after a losing season because of faith in Gary Patterson and the knowledge that he doesn’t put together two bad seasons in a row. Last year may have been a rebuilding year, but expect TCU to be back in full force in 2017.

The 2016 season got off on the wrong foot defensively and never improved. The Horned Frogs gave up 41 points and far too many yards against FCS team South Dakota State, and they followed that up by choking away what should have been a comeback win against Arkansas when a late chip-shot field goal was blocked.

The rest of the season was actually not terrible from there and had a lot of promise, as TCU was very competitive in almost all of its losses. A little late-season slump led to bad games against Oklahoma State and Kansas State, but the Horned Frogs acquitted themselves well enough against a favored Georgia team in the Liberty Bowl. It was a season to forget by recent TCU standards, but it was only a few plays away from being a very successful one — which is a hallmark of a strong program.

247Sports Composite Ranking: 28th
One of the more impressive notes about Patterson’s success at TCU is that he has built a program that stays around the Top 10 without getting consistent Top 10 recruiting classes. He’s continuing with the mentality he built while still a mid-major program. He gets the right guys for his vision and he molds them into great football players. It’s been working for well over a decade. There’s no reason for him to stop now.

11 — Combined margin of victory over Kansas since 2014. This stat is just plain weird. Kansas has been one of the worst teams in the country for three straight years. TCU was a legitimate Playoff contender in 2014 and 2015. TCU was decent last year. And yet, throughout these three seasons, the Horned Frogs haven’t been able to beat Kansas by more than six points. It’s probably just a random anomaly, but three times in a row means that there’s something to look out for here. Why does TCU always seem to struggle with Kansas?

43 — Number of sacks recorded by TCU last year. TCU’s defense had major problems, but the Horned Frogs led the Big 12 in sacks. The team was able to successfully rush the quarterback and often. It just couldn’t do much against the run and the secondary couldn’t stop the ball moving through the air if the line didn’t get to the quarterback in time. Strong defense has been a hallmark of Gary Patterson’s teams his entire career. I can’t see this team struggling on defense two years in a row.

72 –Number of times TCU punted last year. No stat really drives home offensive inefficiency like the number of punts does. A punt means that a drive didn’t end in a turnover, but it also means that the drive didn’t make its way into scoring range. Efficient teams can turn the ball over too. Punts show inefficiency. And the only team in the Big 12 that punted more than TCU last year was Kansas.

Why it matters: This will be the first real test for TCU and our first chance to see how much the Horned Frogs are improved in 2017. Sure, the games against Oklahoma State and Oklahoma might matter more, but Arkansas has a solid defense and consistent offense. If TCU is languishing like last year, we’ll find out in Week 2. If TCU is much improved, we’ll have to keep an eye on the Horned Frogs all season long.

Kenny Hill, QB: The Texas A&M transfer was a potential heir apparent to Boykin, but his 2016 production wasn’t quite up to what his predecessor put up in his years as quarterback. Still, Hill is dynamic and has huge potential. If TCU is going to be the offensive powerhouse it has shown that it can be this decade, it all starts with Hill.

KaVontae Turpin, WR: TCU had some amazing receivers in 2014 and 2015, something that was sorely lacking last season. A large part of that was due to injuries, but there was also general inconsistency on the part of the wide-outs throughout the season. Turpin is the most talented of the bunch to fill the roles that players like Josh Doctson and Kolby Listenbee achieved in their careers. A high-powered offense isn’t really possible without receivers who can make plays downfield. Turpin, if he’s healthy, should be that player.

Travin Howard, LB: Someone on this defense has to step up and be a leader in 2017. So why not expect it from the team’s leading tackler from last year? The run defense needs work, and that starts with both the defensive line and the linebackers. The secondary also needs work, but one player can only fix so much.

Coach Patterson turns things around and TCU wins double-digit games this year, ending the season in the Top 15.