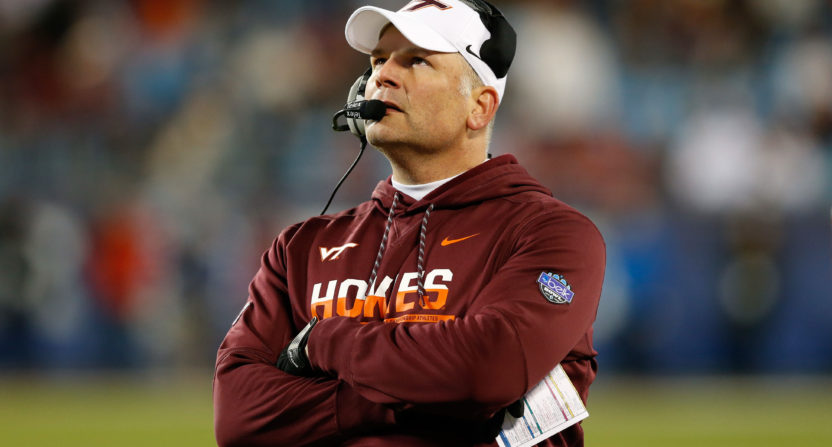 The Comeback’s Top 50 countdown continues with the Virginia Tech Hokies. We’ll move up the list each day, along with our 2017 college football preview, leading up to the opening of the regular season.

Will Virginia Tech repeat as the ACC Coastal champion in 2017?

Some experts aren’t convinced. After all, the Hokies lose a lot of talent on offense, including quarterback Jerod Evans, wide receiver Isaiah Ford, tight end Bucky Hodges, tackle Jonathan McLaughlin, and guard Augie Conte. With so many key players departing, it seems only logical that the Tech offense would take a step back from last season, when it averaged 35 points per game.

Although there are some huge holes to fill, Hokie fans have to like their chances to repeat this fall. Justin Fuente is one of the best offensive minds in the country and will have no trouble adapting his system to suit his players’ strengths. Even if – and it seems like a big if – the offense should struggle, Virginia Tech still returns seven starters from a stingy defense that limited its opponents to just 4.99 yards per play last year. That’s more than enough to win ball games.

Virginia Tech’s 2016 campaign was an interesting one to say the least. Thanks to fumble problems, the Hokies lost to Tennessee before winning three straight, including a decisive victory over North Carolina. Tech followed that up with a head scratching loss to Syracuse. After that, the team posted impressive victories over Miami and Pittsburgh to take a commanding lead in the Coastal race. Although it would lose to Georgia Tech two weeks later, Virginia Tech played for the conference title against Clemson, losing a hard fought contest 42-35.

The Hokies closed out the year with an impressive comeback against Arkansas. Trailing 24-0 at halftime, the Tech defense forced four second half turnovers to win 35-24. This victory reiterated that when Virginia Tech is playing its best football, it is extremely difficult to beat.

Virginia Tech signed the 4th best recruiting class in the ACC according to 247sports.com. The class contained players from nine states, with most of them coming from Virginia (7), North Carolina (4), and Georgia (4). It signed four four-star prospects including quarterback Hendon Hooker, who completed 10 of 11 passes in the spring game. Several other players from this class could see playing time this fall, including Devon Hunter, Dalton Keene, and Drake Deiullis.

26 – The number of times Virginia Tech turned the ball over last season. The Hokies were their own worst enemy in their four losses last year, finishing -2.25 in turnover margin in these contests. To its credit, Tech did a better job of holding on to the football over the final twelve games of the season, fumbling just nine times during that span after coughing it up nine times in the first two games. This trend will need to continue for the Hokies to win the division.

27.45 – This was the percentage of the time that an opponent converted on a third down opportunity. While Bud Foster’s defenses are always tough, last season’s team deserves a lot of credit for how well it played on third down. The Hokies had the third-best defense in the nation on this crucial down, allowing opponents to keep the chains moving less than 28% of the time. They were even better at home, limiting opponents to just a 20% success rate. If Tech can do that again in 2017, they’ll win the Coastal easily.

4 – The number of kicks that Virginia Tech blocked last year. When you think of Hokie football, the first thing that comes to mind is solid special teams play. This tradition continued under Fuente’s leadership, as the team blocked four kicks. In a close game, a blocked kick could be the difference between a narrow loss and a feel-good victory. For Virginia Tech to repeat as division champs, it needs to at least match – if not better – this number in 2017.

Why it matters: Are the Hokies contenders or pretenders in the ACC Championship race? This game will answer that question. Sure, Florida State is the favorite to win the Atlantic, but Clemson is also a top 10 team. While a loss in this contest wouldn’t eliminate Virginia Tech from the division title race, a victory would put the team squarely in the driver’s seat. That makes this game a “must win”.

Why it matters: Like it or not, Hokie fans – and judging from the emails I’ve received, you don’t like it – Miami is the overwhelming favorite to win the ACC Coastal this season. Regardless of whether the media is right or wrong, this contest will be huge for Virginia Tech because it’s the first of two back-to-back road games. A victory in this game would set up a potential winner-take-all matchup on the road against Georgia Tech. On the other hand, a loss could mean that the Hokies need a lot of help to play for the title, especially if they were to lose against Clemson earlier in the season.

1. Cam Phillips, WR – As I mentioned in our ACC receivers preview, Phillips is one of the top returning pass catchers in the league. He’s been a solid performer during his three years on campus, catching 165 passes for 2,063 yards. Last season, Phillips played especially well in games versus ranked opponents, averaging nine catches for 100.5 yards per contest. He will be the Hokies go-to receiver this fall.

2. Tremaine Edmunds, LB – Edmunds was the most disruptive player on the Tech defense last year. He led the team in tackles for a loss, and finished second in tackles, recording 106. He also registered 4.5 sacks, broke up three passes, and forced a fumble. In addition, Edmunds came up with a huge pick against Arkansas in the Belk Bowl, setting up a touchdown, which allowed the Hokies to erase a 24-point deficit. He’ll team up with Andrew Motuapuaka to form the top linebacker duo in the conference.

3. Terrell Edmunds, FS – A playmaker with a nose for the ball, Edmunds can do a little bit of everything. He did a great job in pass coverage last year, leading the team with four interceptions. Yet, he was also effective in run support, finishing fourth on the team with 89 tackles and recording 2.5 tackles for a loss. He’ll be the leader of a very active Tech secondary, which ranked 14th nationally in interceptions and 12th in passes defensed last season.

Cam Phillips will earn a spot on the all-conference team.