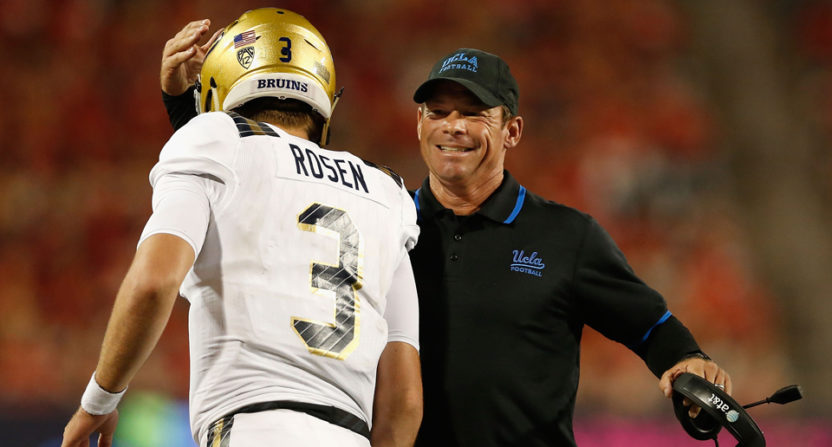 The Comeback’s college football preview coverage continues with the next team in our Top 50 countdown, the UCLA Bruins. We’ll move up the list each day, leading up to the beginning of the regular season.

UCLA has been one of the more disappointing programs in the Pac-12 for a long time. The Bruins have failed to take advantage of a brief period of USC being held back by NCAA sanctions and have stumbled on the biggest of stages in the Pac-12 throughout the tenure of Jim Mora. But a new year gives UCLA a clean slate to paint a different picture.

With quarterback Josh Rosen coming back to lead the Bruins offense, will UCLA have a nice rebound season and prove that 2016 was just a speed bump? Our staff agrees the potential for a solid season is sitting right there for UCLA. They may not be a Pac-12 contender, but the Bruins should be expected to be a better squad in 2017 than they turned out to be in 2016.

The 2016 season was one of disappointment for the Bruins. After losing quarterback Josh Rosen to a shoulder injury, all hopes was essentially evaporated for a program that continues to trend in the wrong direction under head coach Jim Mora.

UCLA nearly pulled off a remarkable comeback in College Station against Texas A&M to open the season, the Bruins lost four of their first five Pac-12 games, with three of those losses coming by a point differential of seven points or fewer. The season ended with a thud with back-to-back blowout losses against USC and California.

A second straight season with a diminishing win total has put Mora on the hot seat, and the fact USC has seemingly been on the rise adds even more pressure on Mora in 2017 after not being able to deliver a Pac-12 champion while the Trojans were tied down by NCAA sanctions.

UCLA has recruited well under Mora, and this year’s incoming class features a pair of five-star defensive talents to look forward to. Defensive end Jaelen Phillips was the top-rated recruit in the state of California and the nation’s top defensive end. He may get a chance to be inserted into the defensive line’s starting lineup early on. Five-star cornerback Darnay Holmes could also get on the field in a key role early as well for UCLA.

25 – UCLA had a Pac-12 worst 25 turnovers in 2016. Of those 25 turnovers, however, 11 came with an interception thrown by backup quarterback Mike Fafaul in place of an injured Rosen. With Rosen back at the helm of the offense, that trend turnover total could go down quickly.

158 – UCLA’s defense has done fairly well in preventing big plays to be executed against then. Last season, the Bruins allowed 158 plays of 10 yards or more, which was the third-lowest total allowed in the Pac-12 (Washington allowed 150 in two extra games; USC allowed 157 in one extra game). The Bruins were one of three teams not to allow a play of 70 yards or more in the Pac-12 last fall (Oregon, Colorado).

35.23 – UCLA’s third-down conversion rate is in need of a boost. The Bruins had the Pac-12’s worst success rate on third down last season, converting just 35.23 percent of their third downs for a first down. Once again, having a healthy Rosen should help that number. In 2015, the Bruins were the third-best team in the Pac-12 on third down (45.13 percent).

Why it matters: Colorado had a Cinderella season and took its first win against the Bruins since 2003 on their way to the Pac-12 South championship. This year UCLA gets the Buffs at home and this will be an important game in determining whether or not UCLA will be in the mix for a bowl game this season. Going into a bye week with a win against Colorado could be a confidence boost after a challenging September slate that includes Texas A&M and road games at Memphis and Stanford (all three could be potential losses).

Losing three straight games to the crosstown rival could be the final nail in the coffin for Jim Mora if the 2017 season fails to impress otherwise. USC has won two straight games in the rivalry by a 19 and 22 points in each game.

Josh Rosen, QB – This goes without saying. This could be the final season Josh Rosen plays at the college level before heading to the NFL. His success on the field coming off a shoulder injury will play a key role in what happens with UCLA this season, and perhaps may be what makes or breaks Mora’s future outlook as a head coach at UCLA.

Soso Jamabo, RB – UCLA’s running game will be led by junior running back Soso Jamabo. If the UCLA offensive line can provide any protection, Jamabo will be a nice complimentary player to Rosen in the offense run by offensive coordinator Jedd Fisch.

Kenny Young, LB – UCLA’s leading tackler returning to the team this season should be a fixture in the middle of the defense once again. Young racked up 90 tackles and five sacks last season.

Josh Rosen will return for a full season and turn in a year worthy of praise and more NFL Draft hype. Rosen ends the season as the Pac-12’s leading passer, coming in ahead of preseason favorites Jake Browning and Sam Darnold. He declares to leave for the NFL in 2018.

Despite the success of Rosen’s stat line, the Bruins struggle to pick up enough wins early on to establish any momentum. That puts Jim Mora on the hottest of hot seats in the Pac-12 and he is relieved of his duties as head coach following a loss to USC. Defensive coordinator Tom Bradley is named the interim head coach for the remainder of the season.