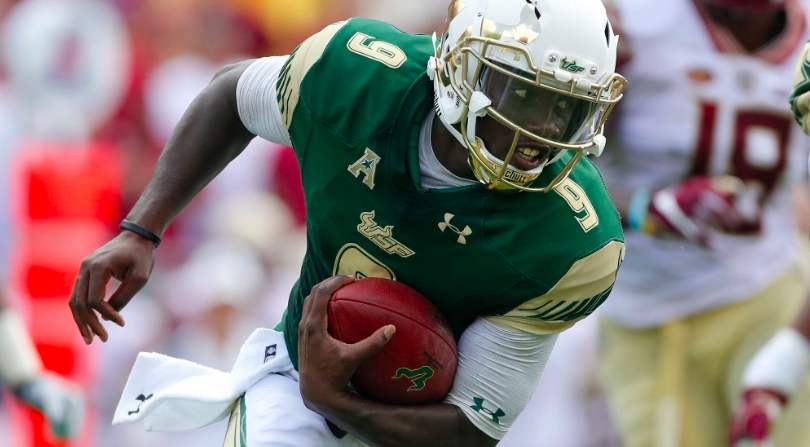 The Comeback’s college football preview coverage continues with the next team in our Top 50 countdown, the South Florida Bulls. We’ll move up the list each day, leading up to the beginning of the regular season.

The USF football program is one that has a lot of positive inertia going for it, at least as much as you can during a coaching change. Such is life in the stepping-stone American Athletic Conference, where hot coaches typically move on to bigger, better, and richer programs that can change the course of a career.

Gone is Willie Taggart, who completely overhauled his philosophy and attack while at USF. All the learning, tinkering, and implementing paid some fairly significant dividends in 2016, as the Bulls enjoyed arguably their best season ever. There wasn’t a conference title to speak of, but that was mainly because of tie-breaking procedures that allowed East Division co-champion Temple to head to the conference title game.

Still, an 11-2 finish, a win over South Carolina in the Birmingham Bowl, and a final AP ranking of No. 19 is a success no matter how you slice it at a program like South Florida.

It’s one of the reasons Willie Taggart is off to take the Gulf Coast offense to Oregon — leaving it all up to former Texas head coach Charlie Strong to continue the momentum.

2016 may be the new benchmark year in Tampa. If we’re being honest, the Bulls probably should have won the American Athletic Conference. But because of the head-to-head loss to Temple, they were left at home watching all of the festivities.

USF got out of the gate quickly with three straight wins to start the season. But then a snag in the road occurred when the Bulls gave up a lot of yards and a ton of points to Florida State to drop to 3-1. South Florida then skated through the regular season, save for the one loss to the Owls. Quarterback Quinton Flowers was the big dual-threat cog in the offense, but the trio of him, almost-1,200 yard rusher Marlon Mack, and wide receiver Marquez Valdez-Scantling were just too much for opposing defenses to contain.

It was an up-tempo, relentless offensive attack at USF last year. And as a result, the Bulls cruised to 11 wins for the first time ever in program history — capping it all off with a win over SEC foe South Carolina in the Birmingham Bowl.

It’ll always be hard for USF to compete with the other Florida schools in recruiting because of the affiliation with a non-Power 5 conference. It would be too much to expect a lot of four- and five-star recruits almost any year, with three-star recruits being the norm. And that’s exactly what USF pulled in for 2017 with 14 three-stars. The class ranked fifth in the AAC.

Among the group coming in, the two with the most buzz are safety Naytron Culpepper (No. 34 at his position) and 6-foot-3, 295-pound offensive guard Jean Marcellus out of Tampa (No. 36 at the position). The staff also hopes they found a diamond in the rough with Culpepper’s high-school teammate, 6-foot-1, 195-pound wide receiver Kevaughn Dingle from Opa Locka, Florida.

285.3 – The number of rushing yards per game for the USF offense. That’s good for fifth in the country. Many believe that the spread-out, up-tempo offense that Willie Taggart used was primarily to bomb away down the field. But that’s not the case. It was a run-first offense with quarterback Quinton Flowers leading the way. He had over 1,500 yards on the ground, and running back Marlon Mack chipped in almost 1,200 yards. Mack is gone, but Flowers will be very, very dangerous again. And D’Ernest Johnson should be more than capable as the featured guy this year at running back.

153.6 –Quinton Flowers’ passer rating in 2016. It wasn’t all about getting yards on the ground for the 6-foot, 210-pounder. He was also more than efficient throwing the ball with 24 touchdowns to just seven interceptions. He also had over 2,800 yards through the air, with a 62.5% completion percentage. The term dual-threat is thrown around a lot, but Flowers did more than threaten, he completed the deal. Yes, he’s back for another season.

482.0 – That’s the amount of yardage per game the Bulls’ defense gave up. There was a price to pay for all the offensive numbers being generated by Flowers and company. The defense was often on the field too long, ran out of gas and simply couldn’t stop anyone consistently. There are 128 teams in FBS, and South Florida’s defense ranked 120th in total defense. It is the biggest elephant in the room new defensive-minded head coach Charlie Strong will need to put his thumb on.

Record in the last five meetings: 1-2 (the two programs have only played three times)

Why it matters: It could be for the American East again and a chance to play in the league championship game. This is the one that got away last year, and you can bet the Bulls would love nothing more than to use the revenge card and take this one at home. Do it, and they’ll have the inside track should any sort of tie-breakers enter the equation again. Lose, and it could be an uphill battle again. It’ll be on a Thursday night in a nationally televised game, so we’ll all be watching.

Why it matters: If you live in Central Florida, this one always matters. But there could be a lot more on the line when Thanksgiving weekend rolls around. With what USF has coming back, there’s a legitimate chance that winning this rivalry game at the end of the calendar could result in playing for some hardware in the league championship game. More than that, though, the two programs are always pulling the heart-strings of the same recruits in the area. Winning can only bolster the Bulls’ chances of stealing away some of the scraps left over by Florida State, Florida and Miami.

Congrats to @USFFootball's Quinton Flowers on being named to the Walter Camp Watch List, his 4th major watch list of 2017 #BullStrong pic.twitter.com/VlV6AcQ4bw

Quinton Flowers, QB – Who else? Flowers was responsible for 65.3% of the Bulls’ offense in 2016, accounting for over 4,300 yards of total offense. He can find seams and eat up yardage like a running back, yet has the touch and arm strength to carve up defenses that try to cheat up on South Florida’s running abilities. With enough returning talent around him, he should still be able to do some significant damage this year. It just depends on how the new coaching staff models his input into the new scheme.

D’Ernest Johnson, RB – Gone is option A at the running back position, Marlon Mack. He and Flowers both went over 1,000 yards on the ground, with Mack averaging nearly seven yards a carry. How well Johnson can fill those shoes will have a direct correlation to where the ceiling can be set for the production of quarterback Quinton Flowers and the entire offense. And as we have seen, it will likely all start and end with how well the offense performs for the Bulls.

Deatrick Nichols, CB – If USF wants to be the type of team they’ve been building to over the last three years, the secondary has to get a ton better. All told, the Bulls’ defense let opposing pass-catchers dance away from them to the tune of 286 yards per game. That’s not championship level stuff. And you know there will ultimately be a game or two where the offense simply isn’t rockin’, and the defense will be called upon to make all the difference. Nichols is by far the most talented option, and if he can somehow take away one passing option himself, it makes things that much easier for the rest of the defensive backs.

USF will take a step back in 2017. Everyone expects the offense to just keep humming along with Flowers back and three returning offensive linemen. However, assimilating players in the right spots and getting them to all buy in under a coaching change typically takes time. Charlie Strong knows how to coach ’em up on defense, but how involved will he be with the offense, and how long will it take for the new staff to get a read on what to do, against who, and when? I say the transition is not as smooth as many would have you believe. The first year of a new coach’s tenure rarely is.

Quinton Flowers will win AAC offensive player of the year. I know, I know, I just said USF will take a step back this year. But that doesn’t mean that Flowers won’t still go off from time to time. He’s got all the skills and experience to still make defenses pay. He’ll still put up more than ample numbers, and have enough wins to lock down POY in the conference.

#USF RB D'Ernest Johnson is a solid back and the Bulls' best chance at having a player drafted in 2018: https://t.co/7CQaIS9eOh pic.twitter.com/JHEIHFrEGz

D’Ernest Johnson will make everyone forget about Marlon Mack. Yeah, Mack was a special talent, but so is Johnson. He just hasn’t had a chance to show it yet. The 5-foot-10, 208-pounder has shown plenty of athletic ability as a dynamic return man, and now he gets the chance to be the main guy in the backfield. He’ll get every opportunity to make plays and gobble up tons of yardage, and won’t disappoint by going for more yardage than Mack did in 2016. Let’s set the bar at over 1,200 yards on the ground for Johnson in 2017 and set him loose.