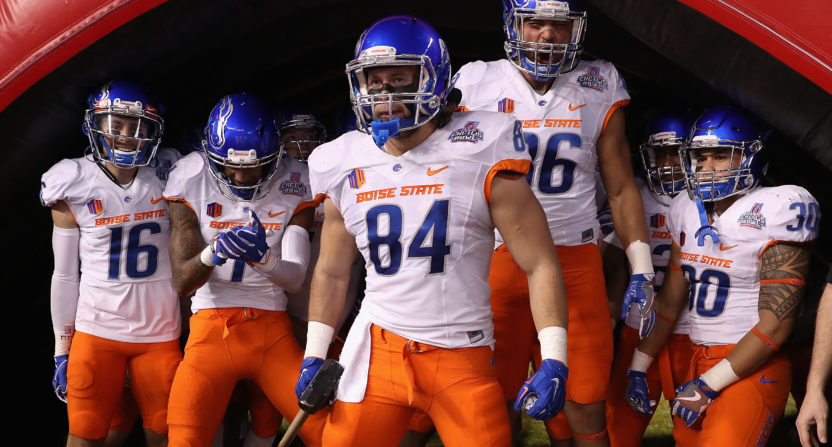 The Comeback’s college football Top 50 countdown for the 2017 season continues with the Boise State Broncos, a traditional powerhouse in the Mountain West Conference looking to ascend back to the top of the conference.

The Broncos are still finding their transition from the coach who made them legitimate dark horse national title contenders to the next coach. And while Bryan Harsin seems to be doing an okay job at keeping Boise State as a Group of 5 power, he’s clearly no Chris Petersen. He reached the Fiesta Bowl in his first year, but hasn’t been back to a New Year’s Six bowl since. This is a program that, even having lost out on realignment roulette, could still be in the national title conversation. The program has the name recognition and still pulls in a fair amount of NFL-caliber recruits once they’ve been developed. But it hasn’t been the case since Petersen left.

Thus, Boise State seems perpetually at a crossroads. Will the program take that leap forward to where it was under Petersen? Will it regress to being just a regular good Group of 5 program? Right now, it’s in-between. That’s not a particularly bad place to be, but it’s also far from what Bronco fans were expecting five years ago.

Boise State started 2016 an impressive 7-0, even if some of the wins were underwhelming. Towards the end of October, though, the team was undefeated, with decent enough wins over Washington State and BYU. Excitement in the program was high, and a second NY6 bowl in three years looked like a real possibility. Then, disaster struck starting in the second quarter against Wyoming. The Broncos blew a 21-7 lead, and the Broncos lost on a safety with under 1:30 to go in the game.

The season was never quite the same, with another loss against Air Force to lose the MWC Mountain Division, followed by a total collapse in the bowl game. To be fair, the losses against Wyoming and Air Force weren’t that bad when we look back on them — Wyoming had a breakthrough season and Air Force won 10 games — but the season as a whole, which started off so promising, ended with a bitter taste in the mouths of Boise State Broncos fans.

The particular ranking of the recruiting class has never mattered for Boise State. Even in Petersen’s heyday, the Broncos weren’t pulling in classes in the Top 50. What matters is whether Harsin is finding the right players for what he wants to do and how he is able to develop them. This is becoming important now. It’s Harsin’s fourth season, which means that he is no longer just trying to coach up Petersen’s recruits. Now we’ll find out whether Harsin can recruit his own guys and develop them to the extent that Boise State expects.

13 — Number of Brett Rypien turnovers in his six career losses: It has been a common trend in Rypien’s career to note his turnovers when he loses a game. This started from the fact that he turned it over five times (the team had eight total) in his first career loss, when the Broncos were drubbed by Utah State in 2015. Still, the stigma and the stat have stuck. Rypien turned the ball over five times in his three losses in 2016, so he’s getting better. If he can protect the ball better in tough games, Boise State will be tough to beat.

8 — Number of consecutive seasons with a 1,000-yard rusher: From Jeremy Avery to Doug Martin to D.J. Harper to Jay Ajayi to Jeremy McNicholls, Boise State has had a feature back go for four digits every year since 2008, when Ian Johnson split carries with Avery and each earned over 600 yards. With McNicholls gone this year and no real heir apparent waiting in the wings, running back will be a key position for Boise State this year. If the Broncos can find another stud–and somehow they always seem to, the offense should click. If not, though, Brett Rypien may see far more pressure than he is comfortable with.

5-2 — Boise State’s record against Power 5 opponents under Harsin: Boise State has not had many national spotlight games against P5 teams in the last three years–the Broncos went 1-1 in such games to bookend the 2014 season (lost to Ole Miss in the opener; beat Arizona in the Fiesta Bowl)–but the Broncos have done well enough against their P5 challengers. Boise State will face two such games this year. The Broncos will be expected to beat Virginia. Whether they can do the same against Washington State in Week 2 may very well determine the level of success of the 2017 season.

There were a lot of games I could have chosen for this section, but I’ll opt for the first revenge game against 2017. The game against Washington State might matter more for national relevance and NY6 bowl position, but Boise has to first concentrate on winning its conference. It hasn’t been to the Mountain West Conference Championship Game in the last two seasons, and a cross-divisional road game against San Diego State won’t help matters this year. A trip to Fort Collins to face Colorado State in November might also be a major divisional showdown, but the first game that will shape this division race will be on the blue turf in late October.

Brett Rypien, QB: Rypien was hailed as the next Kellen Moore when he arrived, though he didn’t immediately win the starting job his first season. He certainly won’t match Moore’s stellar interception numbers or pristine record (then again, 50-3 is a record that no college quarterback may ever beat), but he has the talent to come close to matching the Bronco legend, at least in his last two seasons. It starts with protecting the ball better, though.

David Moa, DL: Boise State’s nose tackle might just be the best defensive player in the Mountain West, and should be in the mix for several postseason awards. He picked up 8.5 sacks last year, and is just a dominant force on the defensive line. He will have to help anchor a defense that is breaking in a lot of new pieces, but Boise State can’t ask for a better lineman to lead the charge.

Bryan Harsin, Head Coach: Everything else about this season will rest squarely on Harsin. There’s not another player returning that matters more. The Broncos return only nine starters, which means that for the first time there will likely be more Harsin recruits than Petersen recruits starting for the Broncos. This is the year that we find out what Harsin really can do with his own players. Will he raise the program back to where it wants to be? Will it have to settle for just being a top Group of 5 program and nothing more? Or could the Broncos possibly fall to the ranks of a standard above-average Group of 5 school? That’s all on Harsin’s shoulders, and we start to discover it this season.

Boise State goes 12-1 and reaches the Fiesta Bowl for the second time in four years — but if the Broncos fail to make the Fiesta Bowl, they start looking for a new head coach.