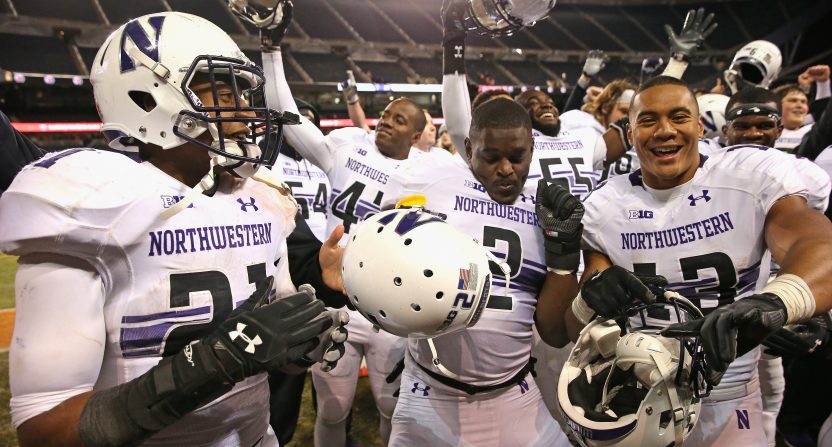 The Comeback’s college football preview coverage continues with the next team in our Top 50 countdown, the Northwestern Wildcats. We’ll move up the list each day, leading up to the beginning of the regular season.

The days of the Northwestern Wildcats being an also-ran in the Big Ten are long, long gone. Head coach Pat Fitzgerald has continued the winning tradition blazed by Gary Barnett and the late Randy Walker, and there’s no sign of a spiraling swirlie anytime soon.

What is lacking though, is consistency. Year over year, you need some tarot cards and a secret-decoder ring in your hip pocket to figure out what type of season Northwestern will throw on us all. And it’s no different in 2017. The Wildcats return some key pieces, but that hasn’t generally translated into seasons to remember in Evanston.

What will this year look like? Here’s giving it our best shot as we dive into what we think we know about one of the flakiest, yet entertaining teams in the Big Ten.

Things didn’t start out chocolates and roses for the Wildcats. They dropped three of their first four to start the season — sometimes in bizarre and unthinkable fashion. The offense struggled mightily with moving the chains consistently, and there was a problem closing out tight games.

But then something began to click. Quarterback Clayton Thorson started to complete more balls, running back Justin Jackson began to find more room to operate out of the backfield, and the defense consistently did just enough to begin piling up more wins.

True to Northwestern form, there weren’t many dominant performances to speak of, but the roller coaster ride of unexpected twists and turns we’ve all seen began to stabilize a bit. The team experienced wins and losses you could actually predict without flipping a coin while walking a tightrope. It all culminated with a win over the Pitt Panthers in the New Era Pinstripe Bowl.

Perhaps 2016 will prove to be a season where more consistency was built into the culture of the program.

You know the drill. Because of the high academic standards and facilities that are still catching up, Northwestern will likely never be pushing the likes of Ohio State and Alabama on the recruiting trail. The Wildcats go hard after smart kids that play with fire, and fit their system. The coaching staff is great at mining overlooked talent and developing the skills on board to mold a team capable of giving teams fits.

To that end, the Wildcats pulled in the 11th-rated class in the Big Ten. There’s only one four-star talent in the mix according to 247 Sports, and that’s in the person of defensive end Earnest Brown out of Denton, Texas. He is the nation’s 217th-rated recruit and sixth at his position. The rest of the 18 kids joining him are fairly typical three-star gets who will need some development. We’ll know some of them soon enough, just like we always do.

25 – The number of turnovers gained last year. As the defense piled up the turnovers, wins became the norm. All told, Northwestern pounced on nine fumbles and snatched 16 interceptions. It’s such a hard stat to control, but if you can have the type of production the Wildcats had in the turnover department in 2016, there’s a good chance some of the close games end up in the winning ledger. Northwestern needs to keep rockin’ in this department in 2017 if it has any designs of being within striking distance of a West Division championship.

265.2 –The amount of passing yards per game given up by the Northwestern defense in 2016. Ouch. Teams took advantage of injuries and depth issues to torch the Wildcat secondary early and often. Now, it’s a weathered group that must find a way to blanket plays down the field, force some pass break-ups on third down, and get the ball back for the offense to do its thing.

.395 – The third down conversion rate for the offense in 2017. Find me a team that converts third downs at a high clip, and I’ll find you a team that wins more often than not. You can’t score if you can’t move the chains, and nothing is a back-breaker for a defense more than giving up a third-down conversion. The Wildcats were fairly pedestrian at turning the chains over in 2016.

It can’t always be the home run, and it can’t always be one guy getting it done. Pat Fitzgerald must find a way to give his team a competitive advantage by being better on third down. Leading receiver Austin Carr is gone, so someone or the collective group must execute at a much higher level.

Why it matters: The Wildcats will be chasing the preseason West Division favorites once again. What better way to close that gap than by beating them at Camp Randall. The Wildcats have a way of being just pesky enough to give the Badgers issues, and they’ll need an all-out performance from the entire team to mark entry into the race for the division crown.

Why it matters: Finding a way to get it done in Madison will turn smiles to despair if the Wildcats drop one the following week to a loaded Penn State team. There’s just not much room for error because of the rather weak Wisconsin schedule — at least compared to last year — so wins are at a premium. Northwestern can be a dark horse contender, but it’ll need to at least split these two to have any realistic chance at surprising all the experts in 2017.

Clayton Thorson, QB – After some struggles his freshman season, the light switch went on as a sophomore for Thorson. He began pushing the ball down the field with more confidence and accuracy, and as a result, the offense fared much better. He lost all-everything receiver Austin Carr, so he’ll need to find some new primary weapons to continue his development. Northwestern will once again be in a lot of close, high-scoring games, and it could be Thorson who pulls victory out of the fire more often than not.

Xavier Washington, DE – We’ve already chronicled the issues defending the pass in 2017. Sure, there needs to be some better play in the secondary, but a pass rush could take a lot of pressure off the back-end of the defense. The pass rush simply wasn’t where it needed to be last year, and Washington is the most likely spot that it comes from in 2017. He’ll need to pin ’em back and get after opposing quarterbacks to force some quick decisions into mistakes.

Justin Jackson, RB – It’s a great one-two punch. Thorson cashing in air-miles and Jackson grinding it out on the ground. It can’t be one or the other, it has to be both working in concert to keep defenses honest for the Wildcats offense to really hum. Jackson might be the best back in the Big Ten not named Saquon Barkley, and if he has another big year, then it’ll ease the pressure on the defense and passing game. Of course, that almost always results in more victories.

Are Justin Jackson and Clayton Thorson top-3 players in the Big Ten at their position? That and more in the MMR. https://t.co/0St721GW20

Justin Jackson will lead the league in rushing. Everyone is expecting No. 26 in Happy Valley to pile up the yards, but don’t sleep on No. 21 in Evanston. He put up over 1,500 yards last year, and as long as everybody is doing what they are expected to do this year on that side of the ball, then he’ll have some huge numbers again in 2017. Don’t be surprised if he takes the Big Ten rushing title over more recognizable names, just like he did last year.

Clayton Thorson will leave early for the NFL as the best quarterback prospect from the Big Ten. It’s hard to believe how far Thorson has come from his freshman year. Receiver Austin Carr was great last year, but he’s not the Richter-Howard receiver of the year in the conference without Thorson throwing to him. No. 18 possesses the size at 6-foot-4, 220 pounds that NFL scouts drool over, and if he can show a better completion percentage and decision-making an extra year of seasoning tends to lead to, then he’ll get some serious looks from NFL front offices.

Northwestern will make a run at the West Division crown. There’s some key pieces back in 2017, most notably on offense. As long as the defense can figure things out on the back-end, and get a bit of a pass rush this year, there’s no reason to believe that the Wildcats can be in the thick of the division race. The schedule isn’t that bad with the miss of Ohio State and Michigan, with only the road game at Wisconsin as the big mountain to climb.