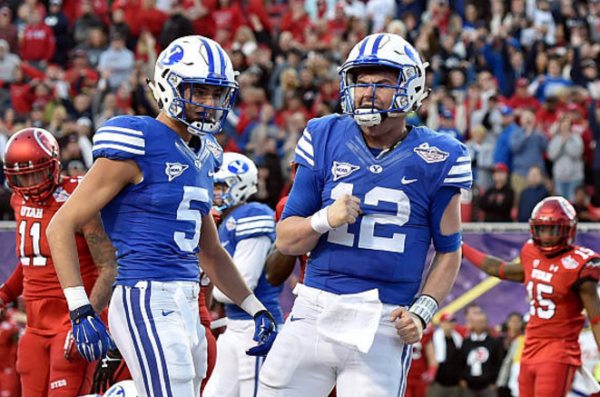 The Comeback’s college football Top 50 countdown continues with the BYU Cougars. We’ll move up the Top 50 each day, leading up to the beginning of the regular season.

The Taysom Hill era at BYU is finally over. The Cougars have Tanner Mangum returning, a rising star in his own right, who has had plenty of opportunities to showcase his talents when Hill was injured. Mangum, of course, is remembered for his career-opening Hail Mary in 2015, followed by beating Boise State on a late near-miraculous touchdown pass.

Mangum, on the Davey O’Brien Award watch list, will come into his junior season knowing that he will be the starter for the first time in his career. This season will be important for second-year coach Kalani Sitake, whose first year was undoubtedly a successful one, his poor decision to go for two at the end of the game against Utah notwithstanding. BYU’s schedule shapes up so that nine wins should be the absolute minimum, and anything less than 10-3 during the regular season (BYU gets a 13th game for playing at Hawaii) will probably be viewed as disappointing.

The 2016 season was one of greatness being inches away for BYU. The Cougars lost their four games by a combined eight points. All of those games were winnable, especially the game against Utah, where the Cougars had all the momentum late but coach Sitake — in only his second game — chose to go for two and the win but came up short. BYU also lost to Boise State by one point, when the Broncos scored a touchdown with just over 10 minutes left in the game.

BYU’s other two losses came by three points each, to West Virginia and UCLA. In retrospect, the loss to UCLA was a bad one, and BYU’s inability to put up points on the UCLA defense probably didn’t have good portents for BYU’s season. This, of course, brings up the flip side to BYU’s losses being so close. The Cougars weren’t so good in many of their wins either. Close wins over Arizona, Toledo, and Mississippi State should show that even if BYU had pulled off a miracle season and made a major bowl game, the results in that game would likely not have been positive.

BYU’s recruiting is back to where it’s been sitting for most of this decade. Sitake’s first class actually broke the top 50, but BYU is moving back to the mid-60s. It’s still early, but the 2018 class is looking much stronger. That won’t really affect this season, but is something to keep in mind as BYU wins games late in the year.

8 — Combined points BYU lost by in 2016. This is a point that bears repeating. After all the late-game “Mangum Magic” of 2015, 2016 saw BYU lose close games. In fact, most of BYU’s losses recently have been close. Three of the four losses in 2015 were by a touchdown or less; four of the five losses in 2014 were by a touchdown or less. As a program, 21 of BYU’s 26 losses this decade were by 10 points or less. That either says a lot or is one heck of a statistical anomaly. But whether it says that BYU can play even superior opponents close most of the time or whether it says that BYU can’t put away teams it should beat is a separate discussion entirely.

2 — Number of Tanner Mangum’s game-winning late fourth-quarter drives. This stat seems important, given the last stat we just discussed. BYU also has five one-score victories with Mangum at quarterback. If the Cougars are playing in a lot of close games, it seems like a good thing to have a quarterback who is known to perform well in clutch situations. On the other hand, Mangum’s two game-winning drives were in his first two games. He hasn’t produced a repeat of that since, though he has had limited opportunities.

1,375 — Number of rushing yards for Jamaal Williams last year. If BYU is going to succeed this year, the Cougars will need to replace his production at running back. We’re not sure who it will be yet or if it will be done by committee, but there needs to be someone in the backfield this year to pick up the slack.

Here’s the thing. BYU has five make-or-break games of 2017. The Cougars generally, for almost a decade now, do very well against lower Group of 5 teams and can go about even against Power 5 teams and top Group of 5 teams like Boise State (and Utah and TCU back in the day). That means that we should expect BYU to go 8-0 against the bad teams on the schedule this year, and either 2-3 or 3-2 against the others (LSU, Utah, Wisconsin, Boise State, and Mississippi State).

How those five games swing will determine whether BYU can go anywhere from 8-5 to 13-0 this season. There’s no game that determines how the Cougars will do in a conference, because the Cougars aren’t in a conference. One game (Utah) certainly matters more to the fanbase, but in terms of the season, all five of those will determine whether BYU is a mediocre 8-5 team, to a ranked 10-3 team, to a Playoff dark horse at 13-0.

Tanner Mangum, QB: Mangum is the core of this offense. He’s a great passer who can scramble when necessary. He’s no Taysom Hill, but his arm has more upside. Mangum can lead this Cougars team to a great season, or he can struggle and have a mediocre season. Working with BYU legend Ty Detmer, I’d lean towards the former.

Chaz Ah You, S: We don’t even know if Ah You will be playing this year. But star safety Kai Nacua is gone, and someone has to come in to replace him. Who better to pick up the slack at safety–in a pass defense that was carved up by Boise State, Toledo, and West Virginia last year–than a high four-star recruit? If not, though, someone definitely has to play well at safety (and corner) or BYU could be in trouble through the air this year. It actually might be very fortunate for BYU that none of its most challenging games in 2017 (aside from Boise State) are known for their pass-first games. LSU, Utah, Wisconsin, and Mississippi State all do most of their damage on the ground.

Motekiai Langi, DL: Again, another player that might not even hit the field in 2017. Why is Langi important to BYU? Because he weighs over 400 pounds, is a freshman, and is incredibly talented. Langi can make highlight reels if he makes plays, and that could lead to some real consistent exposure for BYU that is not easy for a program outside the Power 5 to get.

BYU goes 11-2 at worst, and depending on how the rest of the country shapes out, the Cougars end up as an at-large in an New Year’s Six bowl.