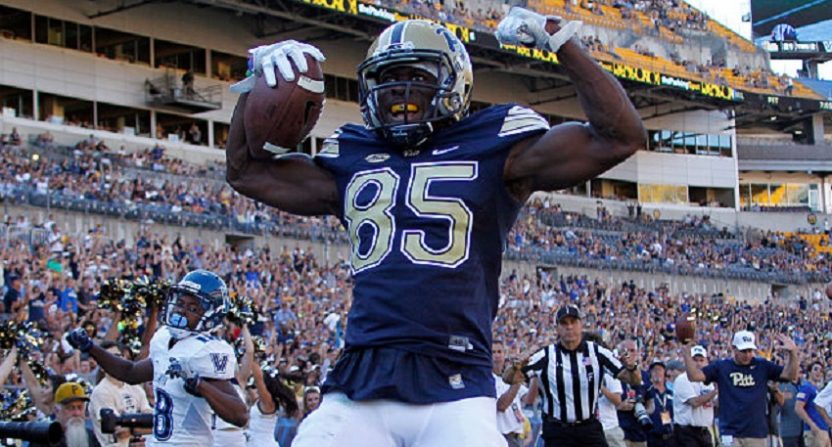 The Comeback’s 2017 college football preview coverage continues with the next team in our Top 50 countdown. Coming in tied for No. 37 (with the Texas Longhorns) is Pittsburgh out of the ACC.

Will Pittsburgh win the Coastal Division in 2017?

That question speaks volumes about what Pat Narduzzi has accomplished during his short tenure as the head coach. Instead of wondering whether or not the Panthers would finish with a winning record – the program posted a 6-6 regular season mark from 2011-2014 – fans want to know whether the team will play for the conference championship. After all, Pittsburgh did finish second in the division during each of the last two seasons.

Even though the Panthers will lose some key players from last year’s team, there are still plenty of reasons for optimism in 2017. USC transfer Max Browne will take over at quarterback this fall, giving the team a much-needed veteran presence under center. He will have a number of talented receivers to throw to, with Jester Weah and Quadree Henderson leading the way. Pittsburgh also welcomes back some of its top players on defense, including safety Jordan Whitehead and cornerback Avonte Maddox.

There were plenty of highs and lows for Pittsburgh in 2016. The Panthers opened up the season with a victory over arch-rival Penn State in the first meeting between the two since 2000. They followed that up with back-to-back losses to Oklahoma State and North Carolina. After two more conference losses to Virginia Tech and Miami dropped its record to 5-4 overall, Pittsburgh rebounded to pull the biggest upset of the year, defeating eventual national champion Clemson in Death Valley.

Even though the Panthers would close out the 2016-17 campaign with a loss in the Pinstripe Bowl, it’s tough to view their season as anything other than a success. After all, how many other teams posted two wins against top five opponents?

Wins and losses aside, what really stands out about last year’s team was how good the offense was. The Panthers averaged 40 more yards per game against ranked opponents than it did against unranked opponents. It was also one of the more efficient attacks in the country, ranking 13th nationally in yards per play.

The Panthers signed the seventh-best recruiting class in the ACC according to 247 sports.com. The class contained four four-star recruits, including safety Paris Ford (53), running back Todd Sibley (284), and tight end Charles Reeves (291) who all ranked in the top 300 nationally. Don’t be surprised if receivers Dontavius Butler, Darian Street, and Michael Smith get some playing time this fall since Tre Tipton will miss the season with a knee injury.

6.71 – This is the average yards per play for the Pittsburgh offense last year. If you were to just look at yards per game, you wouldn’t know exactly how good the Panther offense really was. Under Matt Canada’s leadership, Pittsburgh’s offense made the most of its opportunities. It averaged 6.71 yards per play overall and 6.98 yards per game in ACC contests last season. If Pittsburgh is going to break through in the Coastal Division, it must match this type of production in 2017.

9.3 – This was the average number of yards per pass attempt for Nathan Peterman last season. Against a running game as solid as Pittsburgh’s, most opposing defensive coordinators will load the box to take away the run. Peterman prevented them from doing that. Even though he only cracked the 300-yard barrier one time, Peterman was one of the more dangerous quarterbacks in the ACC, finishing second in the league in pass completions longer than 30 yards. Whoever assumes the starting role will need to continue to stretch the field to keep its opponents honest.

558 – The average number of yards that the Pittsburgh defense gave up against ranked opponents last season. Yes, I’m fully aware that the Panthers won two of the four games in question, but that number was over 50 yards higher than it was in 2015. The defense simply couldn’t come up with the stops it needed against Oklahoma State (640 yards, 8.21 yards per play) and Virginia Tech (556 yards, 6.78 yards per play), which ultimately cost them. At the risk of stating the obvious, this number MUST improve for the Panthers to win the Coastal Division in 2016.

Why it matters: Two words: bragging rights. Although the teams didn’t meet between 2001-2015, this is still one of the top rivalries in college football, dating back all the way to 1896. While a loss in this contest wouldn’t prevent Pittsburgh from having a great season, a win would be huge for recruiting, since both teams recruit a lot of the same players.

Why it matters: Even though every game in conference play is important, Miami gets the nod here because the Hurricanes handed the Panthers their worst loss of the season. However, the game wasn’t nearly as lopsided as the final score would suggest. Pittsburgh actually led 21-20 midway through the second quarter before turnovers and miscues allowed UM to break the game wide open in the second half. In addition to avenging last season’s loss, this contest will help determine whether the Panthers go to an average bowl game or a really good one. That makes this game a “must win”.

1. Quadree Henderson, WR – A true jack-of-all-trades player, Henderson can do it all. He was a reliable receiver for the Panthers last year, ranking third on the team with 25 receptions. He was also the team’s second leading rusher in 2016, rushing 60 times for 631 yards (10.52 ypc) and five touchdowns. In addition, he was one of the top kick returners in the nation, averaging 30.47 yards per return with three touchdowns. With numbers like that, it goes without saying that Henderson will play a huge role in the Panthers’ plans again this season.

2. Jester Weah, WR – Simply put, Weah was the most explosive receiver in the ACC last season. He ranked second nationally in yards per catch (24.17), and had 11 receptions of 30 yards or longer. He was especially effective over the final two months of the season, averaging 32.46 yards per catch during that span. His ability to stretch the field will keep opposing defenses honest, and allow the Panthers to do more offensively.

3. Jordan Whitehead, S – Every defense needs a player like Whitehead. He’s a force against the run, leading the Panthers in tackles per game in each of the last two seasons. Yet, he’s also solid in coverage, breaking up eight passes and recording two interceptions in his career. He’ll team up with cornerback Avonte Maddox to form what should be one the most improved secondaries in the ACC this fall.

Max Browne has a solid season for the Panthers. Browne received way too much criticism for USC’s struggles on offense last year. After losing his job after three games, he comes into the 2017 campaign with something to prove. He’ll match Peterman’s production, and be in contention for All-ACC honors at the end of the season.

Pittsburgh finishes second in the Coastal Division for the third straight year. Even though they’ll need to replace a bunch of starters on defense, the Panthers still have a solid football team. They’ll beat one of the top teams in the nation again this year, but will fall just short of that elusive division title.