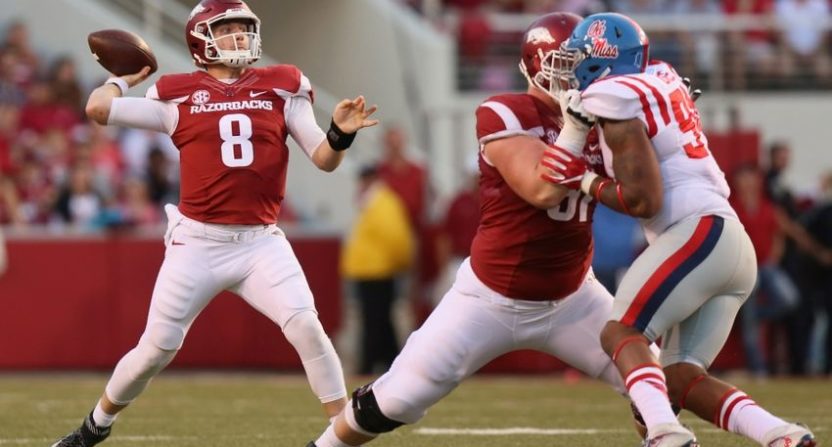 The Comeback’s 2017 college football preview coverage continues with the next team in our Top 50 countdown. Coming in at No. 39, the Arkansas Razorbacks could cause some trouble in the SEC West.

Bret Bielema was a controversial and surprising pick as head coach for the Arkansas Razorbacks in the aftermath of the Bobby Petrino scandal. The first three years for Bielema represented growth and upward movement for the Razorbacks. He brought a rugged toughness to the Razorbacks that was needed to win in the SEC West.

Last season was the first hitch in Bielema’s regime with Arkansas. The Razorbacks were a very Jekyll and Hyde team in 2016. 2017 is a pivotal year in Bielema’s coaching career in Fayetteville. In the “win now” era of college football, Bielema must continue to show progress.

Quarterback Austin Allen showed a ton of promise in 2016 and he is one of the bright spots on the Arkansas roster that must replace its star running back for the second straight season.

Coming off an 8-5 season in which the Hogs went 5-3 in the SEC, many were looking for big things from Arkansas in 2016. The big challenge for Arkansas in 2016 was replacing seven starters on offense and it was a challenge for which the Razorbacks weren’t quite ready. In 2016, they fell from second in total offense in the SEC to eighth. Arkansas scored 5.6 fewer points per game without the duo of Alex Collins and Brandon Allen.

Arkansas was very up and down in 2016. One week they beat Ole Miss, the next week they got trounced by Auburn by 53 points, then they beat Florida by 21 in their next game. It was a year of back-and-forth and up-and-down with the Razorbacks unable to put together a winning streak of any kind after starting off the season 3-0. They finished the season losing three of their last four including a loss to a struggling Missouri team.

Arkansas is never going to be at the top of the recruiting rankings with Bret Bielema. That’s not a knock on Bielema, he just goes about his business a little differently than some of the other powers in the SEC. Arkansas is more about finding the best fits for their system than about the person who is rated highest by the scouting websites. That being said, they did land two heralded recruits to keep an eye on: WR Brandon Martin and TE Jeremy Patton.

3 – This is the number of  true conference home games that Arkansas will play this year. They get Auburn, Mississippi State and Missouri at home but their match-up against Texas A&M (listed as a home game for Arkansas) will be played in Arlington again this season.

44.85% – The Razorbacks defense was the worst in the SEC on third down, allowing teams to convert on almost 50% of their attempts. They have to do a better job getting off the field in 2017. 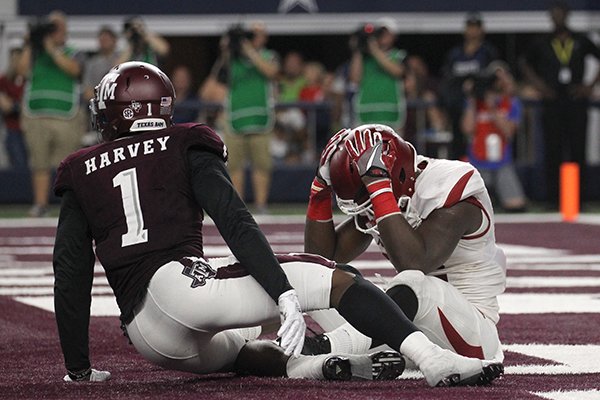 Why it matters: Where this game sits on the schedule is very important. This is the third game of the season for Arkansas and their first conference game. A win would give the Razorbacks momentum and a chance to build up an impressive record (especially if they knock off TCU in week two) heading into the Alabama game on Oct. 14. A win here would also give the Razorbacks their first win over Texas A&M since the Aggies joined the SEC in July 2012.

Why it matters: Arkansas has Ole Miss exactly where they want them. The Razorbacks have won three straight against the Rebels and they can’t give that momentum back now –especially with the issues that Ole Miss is dealing with heading into the season. If the Razorbacks want to have a successful 2017, this is a game they must win.

Austin Allen, QB – The Arkansas offense took a step backward in 2016 but Austin Allen showed a ton of potential throughout the season. Allen has to be more consistent in 2016 and has to make better decisions in crunch time.

Devwah Whaley, RB – Running back has been a special position over the last several years with talent like Knile Davis, Alex Collins, Jonathan Williams and Rawleigh Williams running over defenses. With Rawleigh retiring, the bulk of the carries is going to be given to Whaley. He has the talent to have a huge impact for Arkansas this season. How he plays could make or break the offense.

Dre Greenlaw, LB – Greenlaw started 11 games as a freshman, but then got hurt halfway through the season in 2016. The Razorbacks will need Greenlaw to come back healthy in 2017 and pick up where he left off. As a junior, Greenlaw will need to provide stability and star power to a nameless and faceless defense.

Arkansas will go into Baton Rouge and beat LSU on their home turf for the second straight time. On Nov. 11, everything will line up for the Razorbacks and they will put together their best game of the season.

The Razorbacks will win five conference games in 2017. Arkansas got the easiest possible cross-division schedule they could have by drawing Missouri and South Carolina. Ole Miss will be down this year, Mississippi State is still a huge question-mark and LSU is ripe for the picking. Alabama and Auburn look like the only sure losses on the schedule, but funny things tend to happen in the SEC.