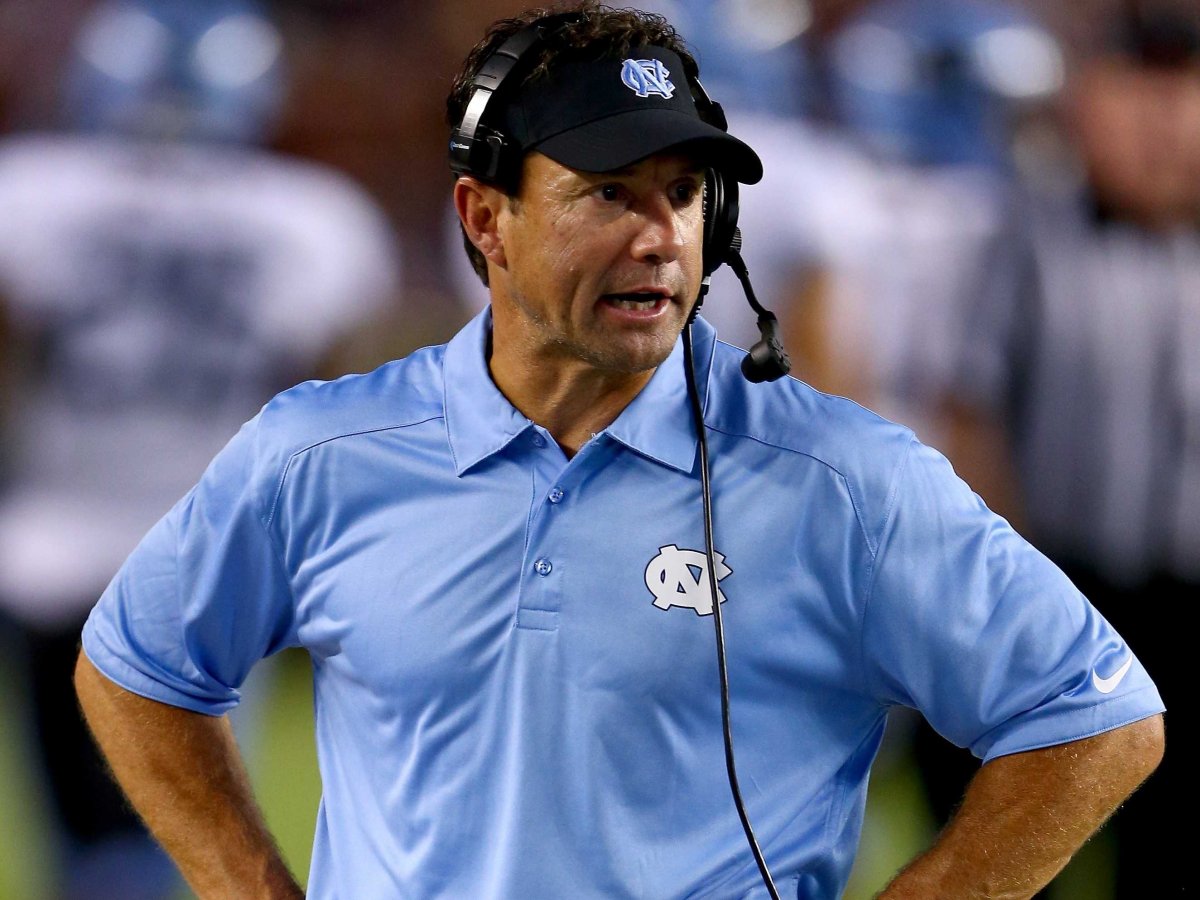 The Comeback’s college football preview coverage continues with the next team in our Top 50 countdown, the North Carolina Tar Heels. We’ll move up the list each day, leading up to the beginning of the regular season.

Will North Carolina rebuild or reload in 2017?

That’s what every Tar Heels fan wants to know right now. UNC had one of the most explosive offenses in the country last year, ranking 17th nationally in yards per play. Unfortunately, it loses starting quarterback Mitch Trubisky, top running backs Elijah Hood and T.J. Logan, as well as top receivers Ryan Switzer and Bug Howard. On the other side of the ball, the Heels lose Nazair Jones and Mikey Bart, who both made a number of plays in opposing backfields throughout the past two seasons.

Despite these losses, there are still plenty of reasons to be optimistic about North Carolina’s chances this fall. The Tar Heels will get a boost on offense from transfers Brandon Harris (LSU) and Stanton Truitt (Auburn). Defensively, UNC returns seven starters from last year’s squad, including top tackler Cole Holcomb (115 tackles), linebacker Andre Smith (113 tackles, 6 TFL), and leading pass rusher Malik Carney (5.5 sacks).

The 2016 campaign was full of ups and downs. North Carolina led Georgia 24-14 in the third quarter before losing 33-24. A few weeks later, it upset Florida State, but followed that up with a blowout loss to Virginia Tech. While the Hokies would lose two games to open the door for the Tar Heels to win the Coastal, losses to rivals Duke and North Carolina State derailed their chances of repeating.

It’s worth noting that when UNC’s offense was firing on all cylinders, the team was very tough to beat. The Tar Heels went 7-0 in games where they averaged at least 6.9 yards per play, highlighted by victories over Florida State, Pittsburgh, and Georgia Tech.

The Tar Heels signed the fifth-best recruiting class in the ACC according to 247 sports.com. The class contained six four-star recruits, including offensive guard Jonah Melton (147), and defensive end Jake Lawler (174), who both ranked in the top 200 nationally. In addition, keep an eye on freshman running back Michael Carter, who got plenty of carries during spring practice.

50.69 – This was the average number of times that opponents ran the ball against North Carolina last season. No, that’s not a percentage, that’s the actual average number of times that teams pounded the rock against the Tar Heel D last season. Although UNC actually improved on the average yards per carry from the year before (down to 4.48 after allowing 5.13 in 2016), it still couldn’t stop its opponents from running the ball. The defense gave up 154 first downs via the run last year, which ranked 122nd nationally. If North Carolina is going to compete in the Coastal Division in 2017, that total must improve.

1,508 –The total number of rushing yards that Elijah Hood and T.J. Logan combined to run for in 2016. One of the things that the Tar Heels didn’t get enough credit for is how well they ran the ball last year. The tandem of Hood and Logan was as explosive as any other in the nation, averaging 5.69 yards per carry. With no clear-cut starter at quarterback (yet), UNC might need to lean on the running game a little bit more, especially early in the season. That makes it imperative that the Heels continue to run the ball effectively this fall. 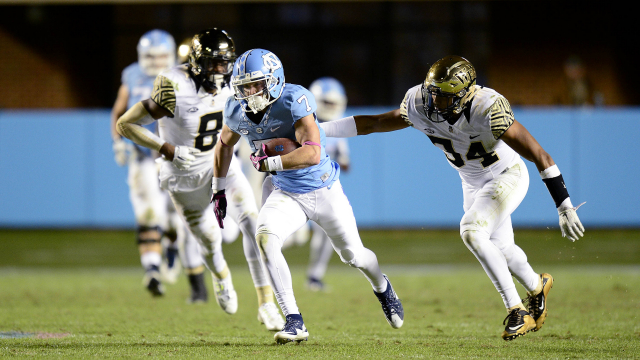 225 – The number of plays from scrimmage that netted more than 10 yards, the 15th best total in the country. As noted above, North Carolina loses a lot of its top playmakers from a very explosive offense. Ultimately, the success or failure of the 2017 campaign will depend on whether or not the Heels can match their production from last season. UNC will need to at least match this number to contend for the division crown this season. The 2015 squad — which won the Coastal Division — finished with 245 plays of 10 yards or longer.

Why it matters: Simply put: this game will prove whether the Tar Heels are a contender or pretender in the ACC championship race. The Cardinals return Heisman Trophy winner Lamar Jackson on offense, as well as seven starters from a defense that ranked 13th nationally in yards per game. While a loss in this contest wouldn’t exactly derail the entire season, a victory would set the tone for the rest of the 2017 campaign.

Why it matters: In a hotly contested divisional race like the ACC Coastal, it’s crucial to get a win on the road whenever possible. Although Carolina won last year’s contest handily, this matchup presents a huge challenge for the front seven. Remember, Georgia Tech ran for 374 yards and 6.34 yards per carry in last year’s contest – both season lows for the Tar Heels. With that in mind, expect the defense to be ready to play in this contest, which will become even more crucial if the Tar Heels lose to Louisville in the conference opener. After all, no one wants to enter October with two losses in ACC play.

The starting quarterback – Whoever wins the job has the monumental task of replacing Mitch Trubisky, who took over for Marquise Williams. While no one expects this year’s quarterback(s) to produce at the level that those two did, it’s still imperative to get solid play under center to keep opposing defenses honest. Otherwise, they’ll load the box to take away the run. However, given Fedora’s successful track record of developing quarterbacks, this isn’t as big of a problem as it seems.

Austin Proehl, WR – As noted earlier, North Carolina loses Ryan Switzer, Bug Howard, and Mack Hollins this fall, making Proehl the team’s most experienced receiver. He had a solid season for the Heels in 2016, catching 43 passes for 597 yards. This year, he figures to be the go-to receiver. If his performance against Stanford in the Sun Bowl (7 catches for 91 yards) is any indication, he’s more than ready for the job.

Malik Carney, DE – Carney was the most disruptive defensive player for the Tar Heels last year. He led the team in sacks (5.5) and forced fumbles (2), while finishing second in tackles for a loss (8.5). He got stronger as the season went on, recording 3 TFL in the final two games of the year. He’ll be the leader of an experienced defensive line that welcomes back 11 of its top 13 players from last season.

Brandon Harris wins the starting job and has an outstanding season. Yes, I’m fully aware that he struggled at times at LSU. But, don’t forget that he had some big games as well, such as a 324-yard effort against Mississippi and a 202-yard performance against Florida, in which he completed 13 of 19 passes. Under Fedora’s tutelage, I expect him to post the type of numbers that everyone thought he would when he signed with LSU.

North Carolina will finish in the top half of the ACC in run defense. Sure, the Heels struggled against the run the last two years, but with an experienced defensive line coming back, they’ll be one of the most improved units in the conference.

The Tar Heels will win seven games this year. Although some preseason prognosticators expect UNC to take a huge step backward in 2017, there’s still more than enough talent on the roster on qualify for a bowl game this season.