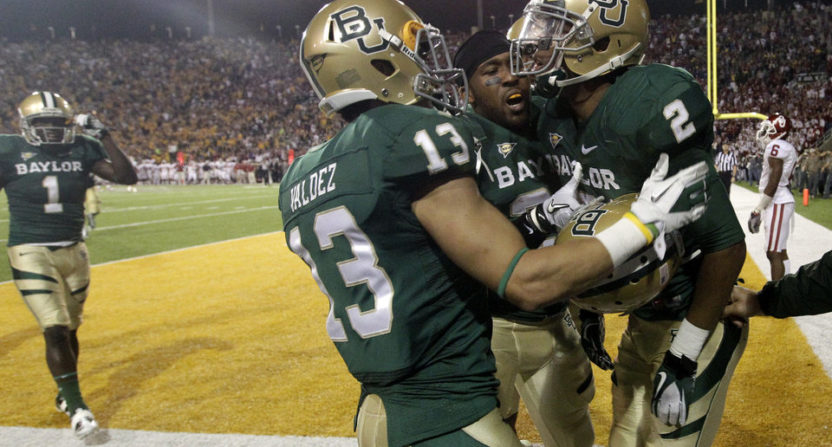 The Comeback’s college football preview coverage continues with the next team in our Top 50 countdown, the Baylor Bears. We’ll move up the list each day, leading up to the beginning of the regular season. Our Top 50 began with Kentucky, Colorado and San Diego State.

To say the 2016 season was one Baylor fans should want to move on from as quickly as possible may be an understatement. The season was plagued by nothing but bad press, and some of that lingers to this day as the focus shifts to a 2017 season with a fresh look.

Baylor has a new head coach in Matt Rhule, at the same time Texas and Oklahoma are moving forward with new, younger head coaches in Tom Herman and Lincoln Riley, respectively. Is this the core of a new Big 12 coaching future? Rhule certainly has taken on a challenge of a head coaching job at a unique time, but if he can continue doing what worked for him at Temple by getting down to playing his style of football that consists of grit and determination, it may not be too long until Baylor bounces back and makes some noise in the Big 12 once again.

But doing so at a time when Oklahoma remains a fixture atop the Big 12 picture and with so much optimism surrounding Texas in the future could make competing for Big 12 titles on a regular basis more of a dream than a reality. As for the 2017 season, the focus will be getting this program back on track, and there are some reasons to believe that will be attainable in Waco as far as the operation on the football field is concerned.

Following a tumultuous offseason that was ravaged by scandals which ripped at the heart of the university and athletic department, Baylor’s would-be-promising 2016 season was taken off course in dramatic fashion. A coaching change sent Art Briles into coaching oblivion as the scandal unfolded and Jim Grobe was brought in to try and keep things as calm as possible. Things started well on the football field for the Bears with a 6-0 start to the season.

Then, Baylor hit a wall. After a close loss aginst Texas, the Bears started to get banged up, such as losing starting quarterback Seth Russell, while also getting blown away by opponents throughout the month of November, starting with a 40-point drubbing at home against TCU.

The year did end with a victory in a postseason bowl game against Boise State in the Cactus Bowl, and led to the hiring of Temple head coach Matt Rhule. Rhule just coached Temple to back-to-back appearances in the American Athletic Conference championship game, with a conference title victory against Navy in 2016.

Matt Rhule had a short period of time to do what he could with his first recruiting class in Waco, and there was a lot of room for scholarships once he took over the job. Baylor’s recruiting was a dumpster fire during the season, for understandable reasons (turmoil within the program, a lame duck head coach not doing much in the recruiting effort). You won’t find any four-star players in this class, but it is consistent with three-star players coming in to work for Rhule. That may help get through his first season with Baylor, but Rhule will have to add some more quality depth in the Class of 2018.

-5 – Baylor’s turnover margin in 2016 dipped to the negative side last season, thus dropping by 18 since the 2014 season. Baylor’s downward trend in turnover margin is an area Rhule will have to focus on if the Bears are going to jump back in the Big 12 race. Rhule’s Temple teams had been on the positive side of the turnover margin each of the last three seasons.

62.0 – Baylor’s offensive line performed better than given credit for as it tried to find uniformity. No Big 12 team allowed fewer tackles for a loss (Iowa State tied for the lead in this category). That is an encouraging trend for the Bears if they can keep it going in 2017, and with some returning experience with three starters to rely on, that should be expected. Depth will be a concern, however.

Why it matters: A home game against West Virginia toward the end of October gives Baylor a chance to finish the regular season on a strong note. By then, Oklahoma and Oklahoma Sate will be in the rearview mirror on the field, and back-to-back games at home against the Mountaineers and Texas could be the last major hurdle in front of Baylor. Winning against West Virgina can set the tone for a positive ending to the season heading into the bowl season.

Anu Solomon, QB – One of the key new additions to the program for Matt Rhule just might be a transfer player. Anu Solomon joins the Baylor program and will get a chance to start right away for Baylor after transferring from Arizona. Solomon showed some great promise at Arizona under Rich Rodriguez, but was never truly consistent for a number of reasons. At Baylor, in a wide-open style, Solomon could thrive and deliver for the Bears.

Terence Williams, RB – Baylor’s leading rusher from 2016 had a needed breakout season for Baylor. Williams rushed for 1,048 yards and 11 touchdowns to fuel the Baylor rushing game. He ended up stealing the show from Shock Linwood and enters his junior season expected to carry the load once again.

K.J. Smith, DE – Getting a chance to have an impact as a junior last season, K.J. Smith ended the season as Baylor’s leader in sacks with 7.0. Now with that starting experience under his belt, look for Smith to become more of a featured player on the defense and a leader on the field as he continues to grow, especially if the rest of the defensive line comes together nicely.

Baylor pulls a stunner in the Big 12 opener at home against Oklahoma, thus derailing Oklahoma’s College Football Playoff hopes (after losing two weeks earlier at Ohio State). But the Bears can’t stay on top of the Big 12 for very long as Baylor falters the next week at Kansas State heading into the bye week.