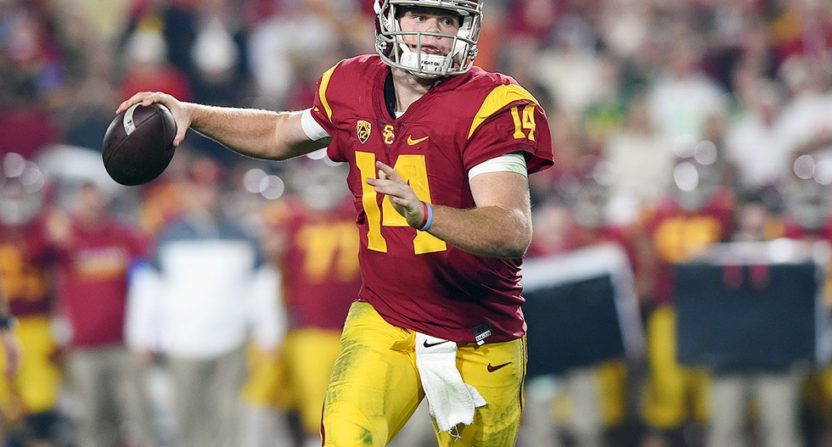 The Comeback’s college football Top 50 countdown is now down to the top five as we approach the beginning of the regular season. Up next in our preseason rankings are the USC Trojans.

One of the hottest teams in the country down the stretch of the 2016 season enters 2017 as one of the most hyped teams to keep an eye out for in the College Football Playoff. Is USC ready to step back into this type of spotlight as a program of national relevance viewed as a national title contender? Or will the Trojans get caught as a team still with some work to do?

USC opened the 2016 season with a dud and ended it with a victory in one of the most entertaining games in Rose Bowl history. The Trojans were roughed up by Alabama in a highly-anticipated matchup in Arlington, Texas, losing to the Crimson Tide 52-6. USC went on to lose two of their next three games (with losses in Pac-12 play against Stanford and Utah), which sent the Trojans heading into October looking to hit a reset button.

It was at that time the rise of Sam Darnold began, and the Trojans went on to be the hottest team in America the rest of the way. USC ended the season with eight straight wins in the regular season, including victories over No. 21 Colorado and No. 4 Washington before blowing away rivals UCLA and Notre Dame to continue rising in the polls and playing their way to the Rose Bowl. And what a Rose Bowl it was, with the Trojans jumping on Big Ten champion Penn State early and then digging out of a fourth-quarter hole for a thrilling victory against the Nittany Lions.

The Trojans just about always recruit well and now that the program is recruiting back at full strength, all systems are a go. There may not be any impact players right away this fall, but keep an eye on running back Stephen Carr as a potential player who gets involved early on. The five-star freshman was one of the top players in California and is the nation’s third-ranked running back.

12.0 – Sacks allowed by USC in 2016. There is another reason Darnold was so good last fall. It’s because opponents could barely even breathe on him. USC allowed just 12 sacks all season long, easily leading the entire Pac-12. Three of the sacks allowed came in the season opener against SEC champion Alabama, which means the Trojans allowed just nine sacks in their next 12 games played.

Why it matters: Stanford has won three straight games against the Trojans in the annual series, including a matchup in the Pac-12 championship game in 2015. This year, USC will get a chance to establish itself as the top program in the state of California when they host Stanford at home. A win will help the Trojans prove the offseason hype has been worth it, because the Cardinal figure to be a pretty darn good team this season too, and Stanford has a knack for being the toughest team in the Pac-12 under the coaching of David Shaw. Stanford has won seven of the last nine meetings going back to 2009.

The good news is there is no more Christian McCaffrey to run wild.

Utah has a chance to once again be a contender in the Pac-12 if a few things go right for them. The Utes held off the Trojans last season to help keep their chances for a Pac-12 South within sight. This year, Utah looks to play spoiler for the Trojans and their Pac-12 championship (and playoff?) hopes. Like StanforUtahTah has a knack for being pretty stingy.

Sam Darnold, Quarterback – Have you heard about this guy? He’s pretty good. He may end up in New York if the offseason hype carries over and is backed up by a solid showing this fall. But Darnold will be a sophomore in the fall, and although he appears to carry the maturity of upper classmen, sometimes you just never know how a sophomore season will play out. But USC has a good one here. A really good one that could be heading off to the NFL soon enough.

Cameron Smith, Linebacker –  USC’s proud linebacker tradition is in good shape for 2017, with Smith leading the charge in the middle of the defense. Smith had 83 tackles last season as a sophomore and will once again be racking up the tackles this fall.

Iman Marshall, Cornerback – After USC lost Adoree’ Jackson to the NFL, Marshall became the top cornerback on the roster this season. He will hold his own after pulling down three interceptions last fall.

The hype train for USC is in full motion, but don’t be shocked if it runs out of steam along the way through the 2017 season. There are some games that should put USC to the test this season, including home game against Stanford and maybe even Texas in September. A road game at Notre Dame could also be a potential upset alert for the Trojans. Two losses for USC knocks them out of the playoff hunt.

Clay Helton gets a big pay raise and a contract extension.