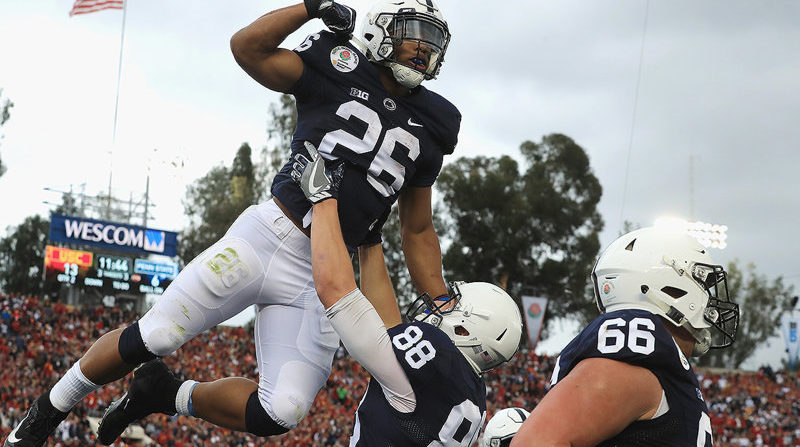 The Comeback’s college football Top 50 countdown is now in the top 10 as we approach the beginning of the regular season. Up next in our preseason rankings are the defending Big Ten champions, the Penn State Nittany Lions.

Before last season, the question about Penn State coach James Franklin was when he would manage to win a big game. After the 2016 season, that question morphed to wondering which big win was his best. Penn State’s 2016 season was memorable for a variety of reasons, but the unpredictability of how the season would play out is what made the 2016 ride to a Big Ten title one of those seasons fans of the blue and white will never forget. But last year was last year, and now Franklin’s only focus is on Akron, Akron, Akron.

The bar has quickly been elevated for Penn State. No longer is success defined by just keeping things together and playing in a decent bowl game. In 2017, Penn State is considered a possible Big Ten favorite and viewed as a playoff contender. Has success come too quickly for Penn State to be able to handle, or are the Nittany Lions ready to prove last season was not a fluke?

Penn State faces many challenges in 2017 with tough road draws in cross-division play, a division with Ohio State and Michigan, and the added pressure of living in the national spotlight with a target on their backs. James Franklin and Penn State’s roster of players have not had to deal with that kind of pressure before, which means how they handle it could be what makes or breaks the 2017 season in Happy Valley.

To say Penn State made a surprising run to the Big Ten championship is a bit of an understatement. The Nittany Lions got off to a sluggish start to the season marred by road losses to Pitt and Michigan. Neither game got off to a good start, but the Nittany Lions had a chance to escape western PA with a win before a late Trace McSorley interception on a deep heave. At the time, it seemed ill-advised considering the momentum in Penn State’s favor, but little did anyone know McSorley tossing the ball up for grabs would actually prove to be an asset for the Nittany Lions down the road.

The same could not be true of a loss at Michigan, where a depleted roster battling injuries could not get anything going right from the first offensive possession due to poor special teams returns and coverage, and an offense that was mastered by a well-prepared and experienced Michigan defense. It was a Horror in Ann Arbor and it seemed at the time Penn State was in for another bumpy season. But things started to click the moment Penn State scored an overtime victory against Minnesota. Who else but Saquon Barkley would ignite the charge?

Two weeks later, Penn State once again came up with some magic at home to stun No. 2 Ohio State with one of the signature plays of the entire college football season, the Block Six.

Penn State held on to knock off the Buckeyes and completely change the outlook of the Big Ten East race. As Michigan faltered twice in November, Penn State managed to play their way to the Big Ten championship as a result of the head-to-head tiebreaker with the Buckeyes. Penn State once again got off to a bad start against the favored Wisconsin Badgers, but would use big plays to fuel their ride to the title in Indy. After being left out of the College Football Playoff, the Nittany Lions then played one of the most entertaining Rose Bowls since Texas-USC, although they were unable to hold on to a fourth-quarter lead against Sam Darnold and the Trojans despite a phenomenal performance by Barkley.

One key area James Franklin has been thriving has been on the recruiting trail. As Penn State has been getting back to full strength, Franklin is doing work with building quality recruiting classes. The Class of 2017 may have missed on a handful of good targets, but the overall depth coming in is good.

Cornerback Lamont Wade is a four-star talent from Pennsylvania and he could work his way into the mix this season. Watch out for wide receiver KJ Hamler from IMG Academy as well, as Penn State likes to get as many wide receivers involved as they can. Hamler may not have the size that makes Penn State’s passing game thrive down field, but good hands and speed make him dangerous.In the years to come, four-star quarterback Sean Clifford will be prepped to lead the offense as well.

402 – Saquon Barkley’s receiving yards total in 2016. We don’t need to spend too much time talking about what Saquon Barkley can do running the football out of the backfield, because that speaks for itself. But he can be quite dangerous as a passing target too in an offense fueled by wide receivers making big plays and one of the Big Ten’s best tight ends. He is perfect for a good old wheel route, even against T.J. Watt.

Why it matters: Call it a trap game, if you wish. Penn State wraps up the first half of their season with a road test against Northwestern, one of the peskier teams to be found in the Big Ten. There is legitimate upset alert potential here and a loss could knock Penn State out of the playoff hunt (assuming Penn State avoids slipping against Pitt or Iowa before this one). James Franklin has also never defeated Pat Fitzgerald, although Franklin has never had a team this good either.

Why it matters: In the two weeks leading up to Penn State’s trip to East Lansing, they will have played a home revenge game against Michigan and a road game at Ohio State. A split in those two games would probably be OK, but wrapping up the three-game stretch out of the bye week against a Michigan State team that will likely be more competitive this season is nothing to overlook. Remember, Michigan State gave Penn State a good battle for a half last year with a spot in the Big Ten championship on the line. Penn State was able to explode and pull away last year, but these Spartans might be a tad tougher in 2017.

And if you are wondering why I didn’t highlight the Michigan and Ohio State games, it is because those games go without saying.

Trace McSorley, QB – McSorley had a dazzling debut season as Penn State’s starting quarterback and wasted little time separating himself from the mold previously cast by Christian Hackenberg. A new offensive coordinator in Joe Moorehead helped McSorley prosper with deep passes down the field. He was quite a gunslinger at times last season, and was able to get away with it more often than not. Will he keep putting the ball up for grabs in 2017, or will there be a slight change in how McSorley runs the offense with a year of starting experience behind him? He certainly is not lacking for confidence.

Mike Gesicki, TE – Barkley and McSoreley get all of the national love, but Penn State’s biggest difference maker may actually be tight end Mike Gesicki. Gesicki gives Penn State a big presence in the passing game, and he already put up bigger numbers a year ago than Michigan’s Jake Butt. Gesicki will play a key role in the success of Penn State’s offense in 2017.

Marcus Allen, FS – Marcus Allen’s return to the program this season will be a much-needed lift in the Penn State secondary. After passing on a shot at the NFL, Allen’s return became even more vital following the spring season-ending injury to cornerback John Reid. Allen has been a starter since his freshman season and will be one of the top tacklers on the team.

Penn State enters the College Football Playoff without winning the division. In a reversal of fortune, Penn State will finish the season with an 11-1 record, highlighted by revenge wins against Pitt and Michigan, and play their way into the College Football Playoff as top playoff contenders from the Pac-12 and Big 12 fail to stack up enough wins to make a valid case over Penn State. With Ohio State already in, the Nittany Lions give the Big Ten two playoff teams.