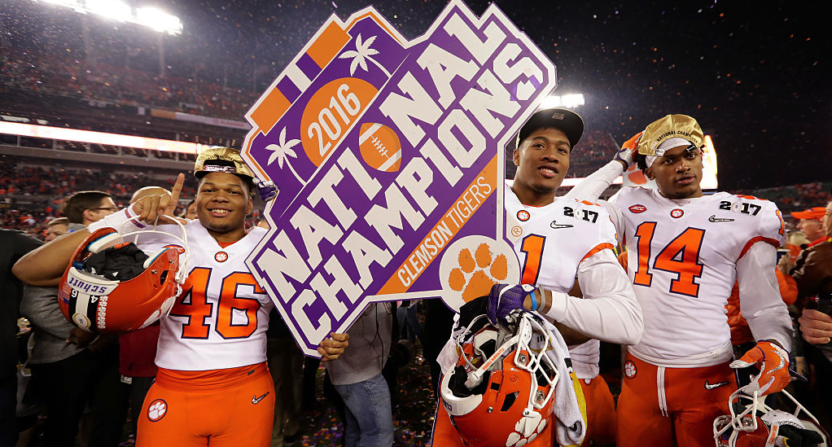 We’ve cracked the top 10 in The Comeback’s college football Top 50 countdown! As part of our 2017 college football preview, we’re moving up the rankings each day until the kickoff of the regular season. Up next, the defending national champion Clemson Tigers.

Will Clemson win the College Football Playoff for the second straight season?

That’s a tough question to answer. After all, winning back-to-back titles isn’t an easy task. To make matters worse, Clemson lost some of its top players from last season, including Deshaun Watson, Wayne Gallman, Mike Williams, Jordan Leggett, Jay Guillermo, Carlos Watkins, Ben Boulware, Cordrea Tankersley, and Jadar Johnson. Given that each of those players earned either first or second team All-ACC honors last season, it’s only natural that many experts would expect the Tigers to take a step back in 2017.

Despite these losses, there are plenty of reasons to be optimistic about Clemson’s chances this fall. Sure, there are skill position players to replace on offense. But Tyrone Crowder and Mitch Hyatt are back to anchor a veteran offensive line that has 83 career starts under its belt. The defensive line will be equally solid, with Christian Wilkins (13 TFL), Dexter Lawrence (9 TFL), and Clelin Ferrell (12.5 TFL) returning to form what should be the top unit in the league. And with Boulware and Johnson departed, the back seven is still loaded with playmakers, including Kendall Joseph (108 tackles, 12.5 TFL), Dorian O’Daniel (10 TFL), and Van Smith (2 INT, 2 pbu, 2 forced fumbles).

That’s the only way to describe the Tigers’ 2016 season. Not only did Clemson win the national championship, it beat six ranked opponents – including four in the top 15 – along the way. The defense was nothing short of outstanding, ranking in the top 10 in scoring (10th), total defense (8th), sacks (3rd), tackles for a loss (1st), interceptions (6th), and third down conversion percentage (4th). Even though the offense wasn’t as stellar as the defense, it did finish in the top 15 in total offense (12th), passing offense (7th), and scoring offense (14th).

It also turned in one of the better offensive efforts in college football over the last decade by scoring three fourth quarter touchdowns against an Alabama D that led the nation in scoring defense, total defense, and yards per play.

It’s tough to argue with those results.

Clemson signed the third-best recruiting class in the ACC and the 16th-best class in the nation, according to 247sports.com. The class contained players from 10 different states, including Georgia (4) and Tennessee (2). Overall, the Tigers signed one five-star recruit (WR Tee Higgins) and nine four-star recruits, including quarterback Hunter Johnson, who will compete for the starting job this fall. Although Clemson welcomes back a lot of young talent from last year’s squad, don’t be surprised if several players in this class see significant playing time this season.

130 – The number of tackles for loss that Clemson produced last season. Heading into 2016, many thought that the Tigers defense would take a step back. After all, the defensive line lost Shaq Lawson and Kevin Dodd, who finished 1-2 in the nation in tackles for a loss. Yet, instead of struggling, the Clemson defensive line played even better in 2016. It led the country in TFL for a second straight season, making 130 stops behind the line of scrimmage. While the Tigers D doesn’t necessarily need to lead the country in this category again this year, it does need to continue to force its opponents to play from behind the sticks.

28 – The number of times that Clemson turned the ball over last year. One of the few things that the Tigers didn’t do well last season was protect the football. Clemson ranked 121st in giveaways last year, turning the ball over 28 times. Half of those turnovers came in conference play against Louisville, NC State, Florida State, and Pittsburgh. To the defense’s credit, the Tigers were able to win three of those four contests. However, this number must improve if Clemson is going to play for the national championship in 2017.

3.65 – The Tigers’ average yards per carry over the last three games of the season. Yes, I know that Clemson played these three contests against Virginia Tech, Ohio State and Alabama, which all have great defenses. But without Deshaun Watson under center, the Tigers can’t rely on the passing game like they have the past two seasons. In order to win ballgames, it’s absolutely imperative that Clemson run the football to keep opposing defenses honest.

Why it matters: This is a de facto elimination game in the Atlantic Division race. The winner will keep pace with frontrunner Florida State, while the loser needs for the winner to lose twice in order to play for the conference championship. Although Louisville has never beaten Clemson, all three meetings in the series were decided by six points or less. The individual matchup between the Tiger defense and Cardinal quarterback Lamar Jackson will be more than worth the price of admission.

Why it matters: Fun fact: the winner of this contest has gone on to win the ACC title every year since 2010. That could be the case again this season, as both teams should enter this game ranked in the top 10. A win in this contest would give Clemson three straight victories in the series, which would be the first time that’s happened since 2005-2007. That ought to help the Tigers continue to land some of the best recruiting classes in the nation.

Whoever wins the quarterback job – Make no mistake about it: Deshaun Watson is a once-in-a-lifetime player. Few quarterbacks – if any – will be as great as he was at the collegiate level. While Clemson doesn’t need this year’s triggerman to be as good as Watson, it does need for him to have a solid season. The new starter doesn’t have to throw for 300 yards per game, but he must do enough to keep opposing defenses honest. If he (or they) can do that, then the Tiger offense will be in great shape.

Christian Wilkins, DT/DE – At 6-foot-4 and 310 pounds, Wilkins has the size to play tackle, and the speed to play defensive end. He was one of the most disruptive players in the ACC last season, recording 13.5 tackles for a loss, 3.5 sacks, and 10 passes broken up. He’s also been a huge contributor on special teams, blocking a kick against NC State last year, and making a memorable 31-yard catch on a fake punt versus Oklahoma in the College Football Playoff two years ago. Although we could also see him on offense (one TD catch versus Troy and a 10-yard run), Wilkins will be the anchor of a stellar defensive line that could be the best unit in the league – if not the country – this season.

Van Smith, SS – Every secondary needs a player like Smith, who can do a little bit of everything. He did well in pass coverage last year, recording two interceptions and breaking up two passes. Yet, he also did a great job in run support, finishing third on the team with 95 tackles, while recording 5.5 TFL. Even though he earned third team All-ACC honors from the league’s coaches as a free safety last season, Smith will play strong safety in 2017. Look for him to make even more plays than he did a year ago.

Clemson will win at least 10 games and finish in the top 15 for the seventh straight season. While this prediction seems like a no-brainer to me, many experts – including some on our TCB staff – think that the Tigers will take a big step back this year. However, Clemson’s defense will be one of the best in the nation, which is more than enough to win ball games this year. If the Tigers can find some answers on offense, a third straight appearance in the College Football Playoff is definitely a possibility.