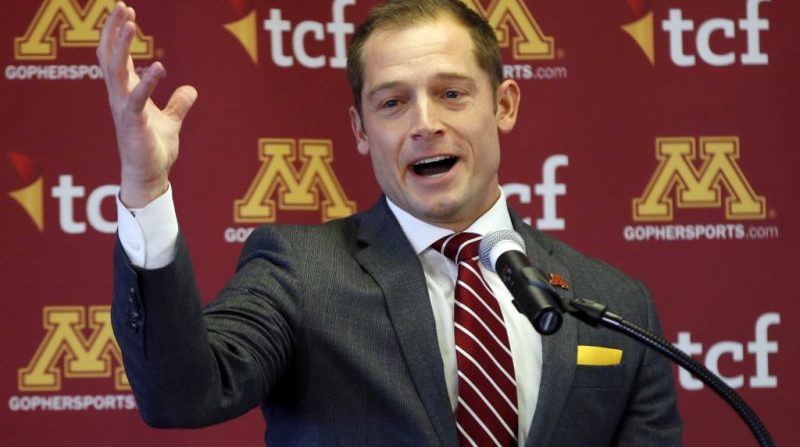 The Comeback’s college football preview coverage continues with the next team in our Top 50 countdown, the Minnesota Golden Gophers. We’ll move up the list each day, leading up to the beginning of the regular season.

After a period of solid success under head coaches Jerry Kill and Tracy Claeys, the Minnesota administrators made a move they felt had to be done when the ball of energy P.J. Fleck became available in January. Despite giving the keys to the program to Kill’s right hand man less than a year prior, it was an upgrade and a shot to boost the program over the hump it just couldn’t seem to get past.

There’s no doubt that Fleck will inject youth, excitement, and energy into a program that needs it to have a shot at competing on the same playing field as the biggest of big boys in the conference. But there are challenges any time you take on a new program. The glitz and the glammer won’t happen overnight, but it has to start somewhere.

It’s time to put the oars in the water.

It was another one of those prototypical Minnesota years we’ve seen during the Kill/Claeys years. The team played solid, fundamental defense, and balanced and conservative offense. The culture of not beating yourself and capitalize on other teams’ mistakes was front and center.

That vanilla way of doing things will get you a solid outcome year over year, and that showed again with a nine-win season, and a tie for third place in the West Division of the Big Ten. The problem of lacking landmark wins continued, however. Penn State narrowly escaped with a three-point overtime win in Happy Valley, and that was the closest Minnesota got to posting a victory against a ranked squad.

In short, the Golden Gophers won the games they were supposed to and lost games that would have raised some eyebrows had they been able to pull one off. It was just another solid season, capped off with a bowl win over a decent Washington State Pac-12 squad.

The Gophers signed the 12th-best recruiting class in the Big Ten according to 247 sports.com. While that’s not that impressive, it was about the best that could be done with the timing of the coaching change. There aren’t any three or four star recruits, but keep an eye on the likes of  dual threat quarterback Neil McLaurin (6th rated at his position) and defensive tackle Royal Silver (22nd at his position) as the best potential in this haul. It may be a ho-hum type of recruiting class for 2017, but Fleck is putting together a rockstar 2018 class.

107 – That’s Minnesota’s national rank in passing yards last year. You hear the word balance thrown around a lot in coaching circles. But that wasn’t the definition of the Golden Gophers offense last year because of the inability to get much going downfield. The passing game amassed just 2,247 passing yards for the entire season. Instead, Minnesota had to rely heavily on the running game even with a returning Mitch Leidner pulling the strings at quarterback. To get past the eight- or nine-win ceiling, the passing game has to be better in 2017.

250 –The amount of yards lost on sacks for the Gopher defense. That’s good for third in the league and one of the main reasons why Minnesota was able to keep teams behind the chains often. Nothing kills momentum on drives more than a tackle for loss, and the Gopher D found a way to get it done more often than you’d think. They’ll want to continue that trend despite breaking in a new coaching staff.

10 – The amount of times the coaching staff went for it on 4th down. Five of them (50%) were converted, but that’s not the point of this stat. Minnesota was the most conservative team in the conference when going for broke. Wisconsin was second with 12 attempts. This goes hand-in-hand with the culture of not beating yourself, but look for a bit of a change in mindset with Fleck on board. It’s not like he’s a river boat gambler, but he rowed the boat in fourth down waters 17 times, converting 15 of those. The more aggressive mindset will no doubt be welcomed in the Twin Cities.

It never, ever, EVER gets old! #OnWisconsin pic.twitter.com/XjeWieUGXR

Record in the last five meetings: 0-5

Why it matters: Forget the last five years. The Golden Gophers haven’t beaten the Badgers since 2003, meaning the streak now sits at 13 losses in a row for the rivalry that’s been played the most in all of the FBS (126 times). These two have been going at it since 1902 and first played for the Slab of Bacon trophy. Come to think of it, this might be the only time in history that the male species had the nerve to replace bacon with something else. At least a larger than life axe took its place. If P.J. Fleck wants to make a statement in year one, what better way than to take Paul Bunyan’s axe back to Minneapolis.

Record in the last five meetings: 4-1

Why it matters: The schedule is extremely back-loaded, meaning a slip up or two early on could keep the Gophers out of the postseason in Fleck’s first year. That’s not how you want to hang the new mailbox in the neighborhood, especially against the other up and coming new head coach Jeff Brohm at Purdue. Minnesota should be better than the Boilermakers on paper this year, but this one could be a tone setting affair for who gets a head start in the race to catch up to the rest of the league. Future recruits could be watching.

Whomever is playing QB – Gone is three-year starting quarterback Mitch Leidner. And although he never really built on a very solid 2015 season, he still leaves a huge hole on the offense as far as experience and leadership goes. The quarterback competition to replace Liedner will go on through fall camp, but all signs point to the job coming down to either senior Conor Rhoda or sophomore Demry Croft. Whoever gets the starting nod will need to at least pose a threat downfield to open up running lanes for Rodney Smith and Shannon Brooks.

Rodney Smith, RB – Speaking of the tailback position, Fleck will likely lean on the ground game a ton as the quarterback position develops. Shannon Brooks will see plenty of action, but the most dangerous and talented guy in Maroon and Gold will no doubt be junior Rodney Smith. He has the speed and vision to be even more of an offensive weapon than he has been, and the coaching staff will call his number when it needs reliable yards on the ground. And often.

Rashad Still, WR – We’re going to stay on the offensive side of the ball, but go over to the outside skill position of wide receiver. He didn’t really break out like everyone expected last year, but P.J. Fleck has preached the need to get the ball to Still a lot in 2017. He’s a lengthy receiver at 6-foot-5, 205 pounds. and can go up in traffic to make momentum changing catches. He’s been a sponge this year acclimating to a new coaching staff, and as long as he can make good on the various ways he’ll get the ball this year, he’s going to put up some impressive numbers and could be an all-Big Ten type performer.

Minnesota will lose one of its home non-conference games in 2017. A new system, new coaching staff and new quarterback. That’s what the Gophers are trying to get off the ground in 2017, and that takes time. The home dates in the non-conference include Buffalo and Middle Tennessee. That’s not exactly stiff Big Ten competition, but both have enough talent to make things scary for a team just getting its oars in the water. I say Minnesota loses one of those two in a wee-bit of a shocker.

The Golden Gophers will get the Badger monkey off their backs. That’s right. The thirteen year slide will be broken in Fleck’s first year on the job. The game’s at the end of the year so the team will have had time to get its act together. Mix in the potential for some equalizing late fall weather and a home crowd and I say dust of Paul Bunyan’s axe because it’s coming back to the land of 10,000 lakes and a coach with energy drinks running through his veins.

P.J. Fleck will have his team actually row a few boats down the Mississippi. Ahhhh, a match made in heaven. Fleck likes to row boats, and it just so happens that his new team sits within a stone’s throw of the mighty Mississippi River. As a team building exercise, he won’t be able to resist having his team take turns rowing the boat down the American icon and post it all on Twitter.