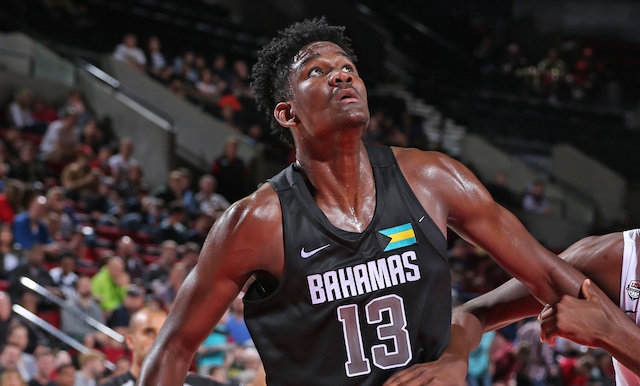 It’s pretty exciting every year to see where the top recruit in the nation is going to land, whether that be in football or basketball. In this case, we learned that the top basketball recruit in the country, DeAndre Ayton, will be attending Arizona.

Ayton announced his decision on SportsCenter. The 7-foot prospect is the top player in his 2017 class by both ESPN and Rivals.

Ayton is yet another great basketball player coming out of the Bahamas. It’s been a good year for hoopers from the island nation, as Buddy Hield won the national player of the year award in college basketball this past season, and was drafted by the New Orleans Pelicans 6th overall in the 2016 NBA Draft.

DraftExpress gives us a better idea of how Ayton is as a player:

What’s so impressive about Ayton at this stage, is his physical and athletic abilities, and how he uses them to have an impact on the game. He has the ability to dominate the game in the paint, using his size and strength to finish inside, crash the boards, and protect the rim. He is not the most explosive athlete, but he is long, and quick off the floor, and has the fluidity and change of speed to look at ease running the floor in transition, not a skill many guys his size have. Ayton’s back to the basket game is not yet polished, and he often just relies on his physical tools to get him what he wants. He is a willing passer, who can force things at times, but made some really nice high-low passes, using his size to see over the top of the defense.

It certainly sounds like the Wildcats have gotten themselves quite the talent. They seemingly get richer and richer ever since Sean Miller became the head man there. But it’s undoubtedly tough to keep up with the likes of Duke and Kentucky. This is a good step in doing so.