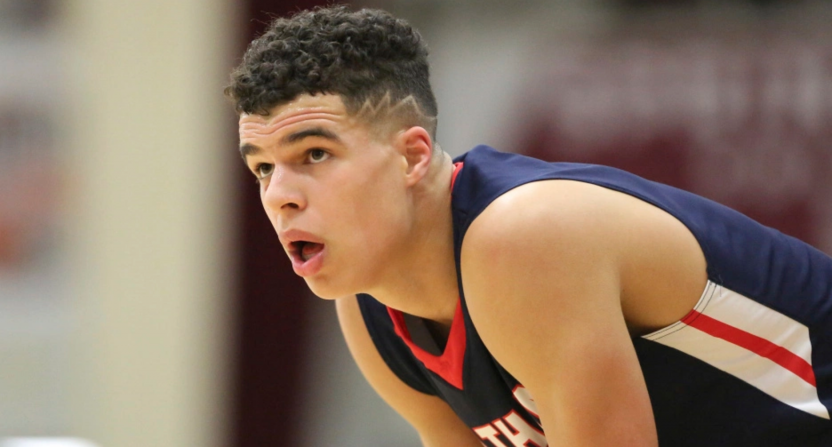 It was only a matter of time before the inevitable happened. One day after getting his release from Washington, five-star recruit Michael Porter Jr. announced his commitment to Missouri.

After endless mediocrity at Missouri ever since No. 15 seed Norfolk State upset the Tigers in the first round of the 2012 NCAA Tournament, there’s finally some excitement in Columbia.

In a positive turn of events, not only did Missouri hire a new coach with winning experience in Cuonzo Martin, but Washington’s decision to fire Lorenzo Romar made the Tigers the frontrunner for Porter as well.

Porter still named Washington, Oklahoma and Virginia among his finalists once he requested his release from the Huskies. But once his father, Michael Porter Sr., signed on to Martin’s staff, it was pretty obvious where his son would wind up.

Some, including Porter Jr., thought Washington’s incoming recruiting class could help Romar keep his job one more year. Romar also had commitments from four-stars Daejon Davis, Jaylen Nowell and Blake Harris. Even with Porter out of the picture, that’s a top 10 class, according to 247Sports.

Loved this coaching staff and couldn't wait to start something special next year…this hurts. ?

But ultimately a 9-22 record while squandering possible No. 1 pick Markelle Fultz’s only collegiate season was enough for Washington to cut the chord.

Now Missouri enters a similar situation as Washington’s this past year. Porter is Martin’s first recruit, and he joins a roster without much promise. The Tigers had one of the youngest teams in college hoops, but regardless 8-24 with losses to NC Central, Eastern Illinois and Lipscomb does not look pretty.

I’m not sure if this is a good thing or a bad thing for a team that terrible, but Missouri will return its top six scorers. Plus, the Tigers have another borderline top-100 recruit in point guard C.J. Roberts, who signed his letter of intent under former coach Kim Anderson.

So maybe this team could actually compete with Porter. Martin will definitely receive some pressure to take this team to at least the NIT.

But remember that this program has won 27 total games over the last three seasons. While Porter may have played in obscurity, just like Fultz, at Washington, it remains to be seen if the situation will be any different at Mizzou.

Even if Missouri still stinks, at least fans will get to watch a special talent next season.