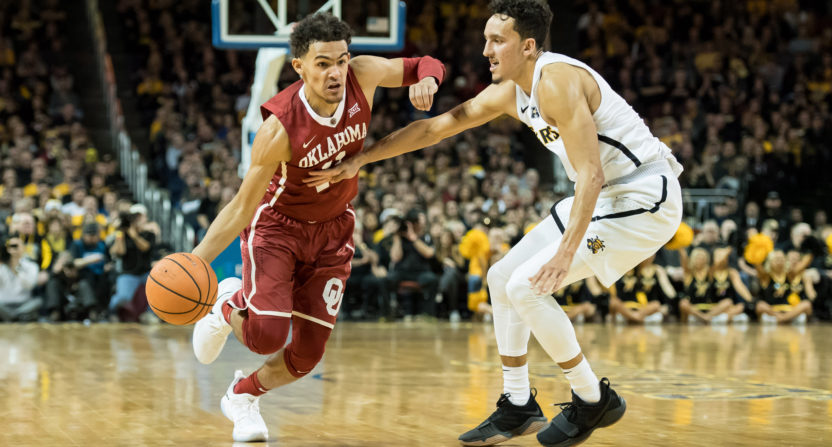 Every time we think we’ve seen it all from Trae Young, the Oklahoma point guard does something new and spectacular. On Tuesday, Young hung 26 points and 22 assists on Northwestern State, tying the D-1 record for assists in a game. Yes, you’re reading that correctly. Somebody call the NCAA compliance department, because Young waltzed out of Lloyd Noble Center with $2.20 in dimes.

Oklahoma coach Lon Kruger let Young stay in on the floor during a blowout — the final score was 105-68 — as the freshman padded his numbers, but Young still played only 29 minutes, nearly four below his season average. He outproduced Northwestern State’s entire team, scoring or assisting on 76 of the Sooners’ points.

He scored or assisted on 76 of Oklahoma's 105 points. (Via @ESPNStatsInfo)

Northwestern State may be ranked No. 316 in KenPom, but those are insane numbers no matter who you’re playing.

Young is the 18th Division I player to put up 20 assists in a game, ending a drought of nearly 10 years. Alabama State’s Brandon Brooks last did it on March 8, 2008. Young also shattered the single-game record for a Big 12 player.

Trae Young (@OU_MBBall ) has set a Big 12 record for assists in a game.

He’s also the first player in the last 20 years with at least 20 points and 20 assists in a single game, according to ESPN Stats & Info.

Per @ESPNStatsInfo, Trae Young is the first player in the last 20 years with at least 20 points and 20 assists in the same game.

The craziest part of this whole thing may be how not shocking Young’s stat line was. It was only a matter of time before he pulled off something crazy. His 54.6% assist rate leads the nation, and if he can keep it up, he’ll break the KenPom era record. He’s also got a 127.2 offensive rating with the second-highest usage rate in college basketball. After Tuesday’s performance, he leads the nation in points and assists per game. It shouldn’t surprise you he’s dominating the KenPom Player of the Year race.

Young has faced some very good teams, although none would be considered “elite” defensive teams. Wichita State, ranked No. 19 in KenPom’s adjusted defensive efficiency, has been his toughest challenge so far. He’ll have to face four top-10 defenses two times each in the Big 12.

But against top 50 opponents in KenPom, his numbers have been right on his averages. He dropped 29 points and 10 assists in a win at Wichita State last weekend. The game prior he posted 29 points and nine dimes against USC. In the PK80, he torched Oregon for 43 points on 11-for-22 from the field and 17-for-18 at the foul line.

So those top 10 defenses in the Big 12 should be more scared of Young than Young is scared of them.

Young has received tons of comparisons to Steph Curry. While it’s unfair to liken a college freshman to a two-time NBA MVP, you can understand the comparison given Young’s elite skills as a scorer and passer. His numbers are strikingly similar to Curry’s junior season stats, and in some cases they’re better.

Trae Young isn’t Steph Curry, but his current pace is remarkable. Diving into the numbers (and other draft stuff) https://t.co/4Qgpx9JS7Q pic.twitter.com/kffNEiWWLQ

Although Curry played point guard in his final year of college, he was really known at Davidson for his scoring ability. His playmaking skills didn’t truly take off until he reached the NBA. While there’s a certain resemblance between Young and Curry’s style of play in 2017, Curry was a remarkably different player in college. Young is paving his own path, one that in some ways has been even more preposterously impressive than Curry’s college performance. He’s averaging as many points as Curry in addition to assisting well more than half of his team’s field goals while he’s on the floor.

The last time Oklahoma basketball was relevant, it was a different sensation driving headlines. Buddy Hield had a dominant 2015-16 season averaging 25 points and shooting 45.7 percent from three, guiding Oklahoma to the Final Four. But Young, as a freshman, is already doing things Hield never did.

As with that 2015-16 season, Oklahoma has become must-watch TV. Not only has Young been sensational, but he’s got Oklahoma grooving. The Sooners are now 9-1 with a 3-1 record against the KenPom top 50. They’re the most entertaining team in college hoops thanks to a combination of up-tempo pace and incredibly efficient offense. And that combination works so well because Trae Young is a frickin’ madman.