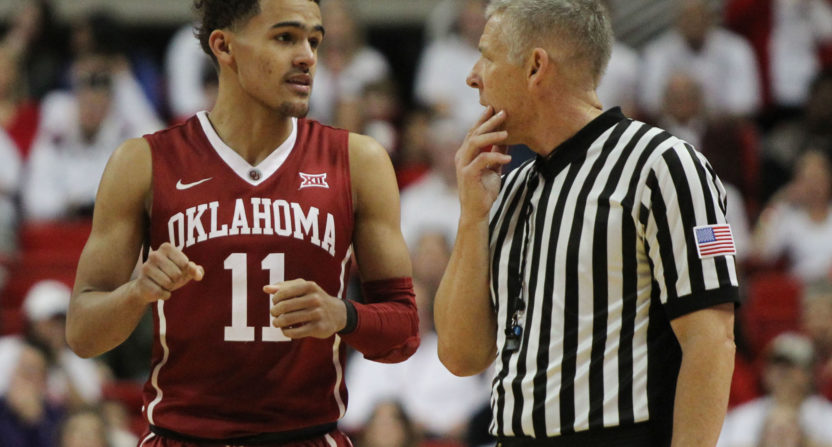 Oklahoma freshman stud Trae Young is still leading the nation in scoring and assists, but with his recent struggles and the Sooners falling to below .500 in the Big 12, the star point guard no longer has firm footing atop the National Player of the Year race.

Oklahoma is 0-4 to begin February, and during the skid has posted an average offensive rating of 97.8. Young’s team has fallen from a Big 12 contender to No. 30 in KenPom, and even a win over Texas on Saturday may not be enough to keep the Sooners in the AP Top 25 on Monday after Tuesday’s loss to Texas Tech.

While Young’s overall numbers are still better than anyone else’s in the sport, it would be quite a deviation for a player from a team like Oklahoma to win National Player of the Year — unless, of course, the Sooners turn this around and look like a surefire Sweet 16 team again by March. Andrew Bogut, whose Utes were ranked No. 15 on Selection Sunday and received a No. 6 seed, would be the best comparison and that’s going all the way back to 2004-05.

Since 2006-07, when Kevin Durant was named Player of the Year from a fourth-seeded Texas team, the National Player of the Year has come from a team ranked top 10 in the polls and top 15 in KenPom each season. So although it still looks like Young will become the first player to ever lead Division I in points and assists in the same season, it’s also time to look at some Player of the Year candidates from better teams.

Here are his six competitors:

Brunson is the obvious pick. Despite dropping two of its last three, Villanova is still ranked No. 2 in KenPom. Brunson had a rare bad outing in Wednesday’s loss at Providence, but he’s been the best player on the floor in nearly every game the Wildcats have played. His numbers back that up: 19.8 ppg, 4.7 apg, 63.1 eFG%. He may not be the best at any single thing, but he’s tremendously efficient across the board.

Bagley has incredible numbers and plays for a top-five KenPom team, which makes him a pretty great candidate. However, a right knee sprain has put his candidacy in some jeopardy. Bagley has missed the last two games, and Duke has actually broken out of its slump with its star freshman sidelined, granted the wins have come over mediocre competition at best.

In an average year, Bagley could be a frontrunner with 21.2 points and 11.4 rebounds per game. It’s not clear when he will return and if he misses a significant amount of time, that could take him out of the race.

This is an interesting one. Because Landale plays for a mid-major on the West Coast, he doesn’t get much buzz in the media. But his numbers are certainly POY worthy. He averages 22 points, 10.7 rebounds, 2.1 assists and 1.1 blocks. He ranks 14th in the nation in field goal percentage and second in KenPom’s and Bart Torvik’s Player of the Year rankings.

The easy knock on Landale is he only scored four points in last weekend’s loss to Gonzaga, but he still contributed 10 rebounds, four assists and four blocks. Plus, he dominated the Zags in the first meeting with 26 points on 12-for-15 shooting and dropped 33 points on 25 shots in a November loss to Georgia. So it’s not like he hasn’t had other, dominant performances against legitimate competition.

Evans has quietly become one of the best dudes in college hoops. After entering as a defensive specialist, he’s grown into a lethal two-way player as a senior averaging 18.7 points, 3.4 assists and 1.4 steals.

Even though you could’ve easily missed it on ESPN’s broadcast, Evans dominated the head-to-head battle with Trae Young in Tuesday’s win over Oklahoma. Evans went for for 26 points on 9-for-15 shooting, while Young scored 19 points, shot 0-for-9 from three, turned the ball over six times, and posted his second lowest offensive rating of the season.

The Musketeers are a top-five team in the polls, and Bluiett is a legit superstar scorer. So you can’t leave him off this list.

Bluiett scored 37 points and shot 8-for-11 from three earlier this week against Seton Hall. Earlier this month, he shot 6-for-9 from deep against Butler and 6-for-10 against Georgetown. The Musketeers are 8-0 games decided by six points or less, and his clutch gene has saved Xavier in multiple close games this year.

The Musketeers enough weapons where Bluiett doesn’t have to go crazy every night in order for them to win, so he’s averaging “only” 19.6 points with a 58.2 eFG%.

Truth be told, I don’t see Bridges as a National Player of the Year. In fact, Ohio State’s Keita Bates-Diop is my Big Ten Player of the Year pick as of now. But there’s been a ton of hype for Bridges and Michigan State all season, so I do see a path for the voters choosing Bridges if the cards fall the right way.

Bridges has gotten better as the season’s gone on, and he got his defining moment last weekend hitting the game-winning three to beat Purdue. His numbers — 17 ppg, 7.0 rpg, 56.3 eFG% — are good, but not eye-popping and the same goes for Michigan State. The Spartans are ranked high in the polls and in the top 10 for KenPom and other noteworthy analytics. But they’re an ugly team that hasn’t played a ton of great competition this year.

If Bridges and Michigan State can dominate their way through the Big Ten Tournament, he’ll get some buzz. But it will have to be a special stretch. Keep in mind that Bridges has only a 97.5 offensive rating in six games against the KenPom top 50, and it hurts his case to have been generally average against good teams.