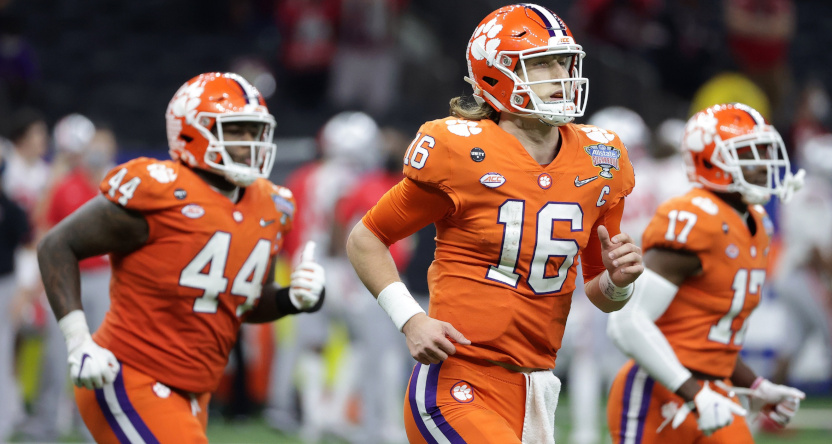 While Trevor Lawrence got the Sugar Bowl CFP semifinal game for his Clemson Tigers off to a good start Friday with a first-possession touchdown run,  his play since then has had more question marks. By the half, Lawrence had thrown for 152 yards and no touchdowns to Ohio State QB Justin Fields’ 223 yards and four touchdowns, and the Buckeyes were up 35-14. And while Lawrence threw for a touchdown early in the third quarter and then had Clemson driving for more, down 42-21, he fumbled at the Ohio State 43 with just under four minutes left in the frame. Defensive tackle Tommy Togiai forced that fumble, and linebacker Justin Hilliard recovered it:

The Buckeyes' defense forces the fumble on Trevor Lawrence. pic.twitter.com/LDp5bDAd67

While the Tigers’ defense was able to hold Ohio State to just one first down on the next possession and force a punt, that still took valuable time off the clock. And Clemson only got the ball at their 13 after the punt, with just around a minute left in the quarter. That drive then ended in a punt of their own following a fourth-and-short false start penalty on offensive lineman Matt Bockhurst, and the Buckeyes then picked up a touchdown of their own on the next drive. That came with Fields throwing his sixth touchdown pass of the night, a 45-yard strike to Jameson Williams:

Of course, no one knows what would have happened if Lawrence hadn’t fumbled on that drive. Maybe Clemson still wouldn’t have scored there, or maybe they would have scored but then never got any closer. But with how things actually did play out, that fumble looks like a crucial moment.