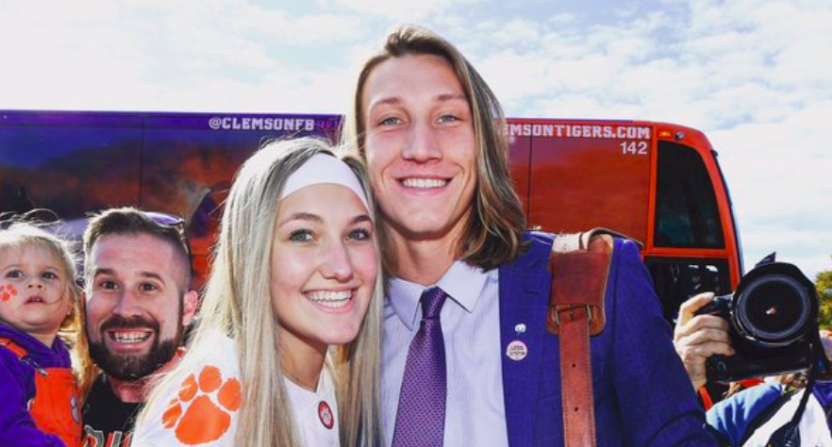 Clemson Tigers quarterback Trevor Lawrence is a distinctive-looking guy. He’s got the long, flowing blonde hair, the California surfer-dude smile, and a face that seems to simultaneously embody strong masculine and feminine features. He stands out in a crowd, to say the least.

And yet, he’s apparently not one-of-a-kind. We found that out last week when we were alerted to the prevalence of Trevor Lawrence doppelgangers making videos as him on TikTok, the social media platform you’re now too old to understand.

There’s an underlying world of people who look like Trevor Lawrence and I wish I was a part of it. pic.twitter.com/kDmig6Cs25

This became such a thing that Lawrence himself checked out the videos and gave his feedback on how well his lookalikes looked like him.

If you do TikTok, I honestly don't, there is video of a girl that looks a lot like Trevor Lawrence doing impersonations of the Tigers star quarterback. It is really funny and something you should look up for a good laugh.
Find out what Trevor thinks about it here.@WSPA7 pic.twitter.com/q5F9RfDHHX

“That one girl does look a lot like me.” Lawrence was presumably referring to Bella Martina, the 16-year-old girl in the initial video who really, really, really does look like him in profile. Martina recently told The Athletic what she would do if she met Lawrence in person:

“I don’t know what I would say to him (if we ever met) because I don’t know how he would react,” Martina said. “I’d be like, ‘Hi! My name is Bella. You’ve seen my TikToks. We have the same face.’ I’d be so overwhelmed. I might just squeal.”

Well, as these things are bound to happen these days, the two met in person on Saturday before Clemson’s game against Wake Forest. It’s unclear how much squealing there was.

Hopefully, there wasn’t some kind of mix-up in the crowd and Clemson ended up ushering Martina into the stadium and leaving a confused Lawrence outside. Then again, who knows, maybe she’s an even better quarterback than he is. Give it a shot, Dabo. What do you have to lose?