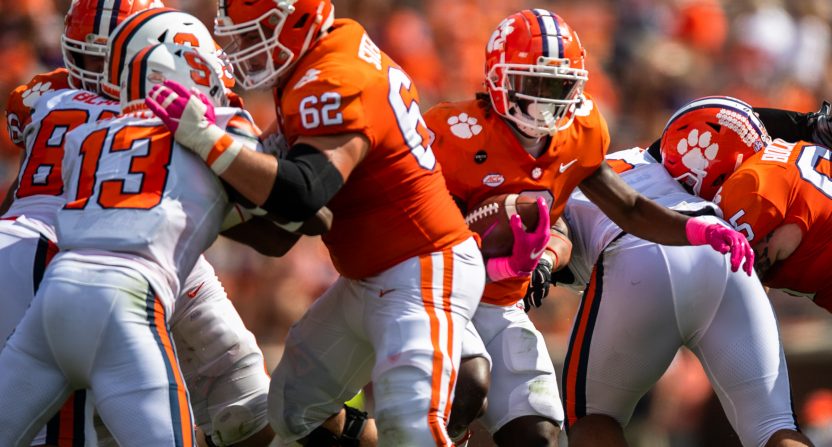 The No. 2 Clemson Tigers came into Saturday as a 46-point favorite against the 1-4 Syracuse Orange. The first half didn’t exactly inspire confidence that they’ll be able to hit that mark. While the Orange are far from being competitive, the listless Tigers have allowed them to stay in the game and only lead by 13 at halftime.

Things got off on the expected track for Clemson. The opening drive ended quickly with a Trevor Lawrence touchdown pass to Cornell Powell.

That was followed up with a Clemson field goal and then a Travis Etienne running touchdown that put them up 17-0 in the first quarter, as you would have assumed. With Syracuse’s offense sputtering, there really wasn’t much expectation that the Orange would be able to keep pace.

However, Clemson took their foot off the gas and that’s when the mistakes started happening. First, a Tigers punt was blocked deep in their own territory, setting up Syracuse’s first touchdown on the day.

Clemson got back on track with another Trevor Lawrence touchdown pass, this one to Davis Allen, extending their lead to 24-7. And as Syracuse couldn’t get anything going on offense it seemed like the route would be soon enough. However, that’s when Trevor Lawrence not only threw an interception but also the first pick-six of his entire college career.

Didn’t realize this but that pick six by @garrettismynam3 was the first pick six of Trevor Lawrence’s career. That’s just insane.

Clemson tacked on a field goal right before halftime, making it 27-14. Odds are that Clemson is not in any real danger of losing this game. But they clearly aren’t running away with this one so far the way they were expected to. Syracuse is way down this year, but they do have a tendency to give the Tigers trouble every few years. A closer win than expected won’t ding Clemson too much, but so far the game has been a reminder that they’ve still got things to work on.

Also, not a great day so far for the person who bet $8,600 on Clemson to win, netting them $8.60 in winnings. Then again, something tell us that if you’ve got the ability to do that, you’ll be fine either way.