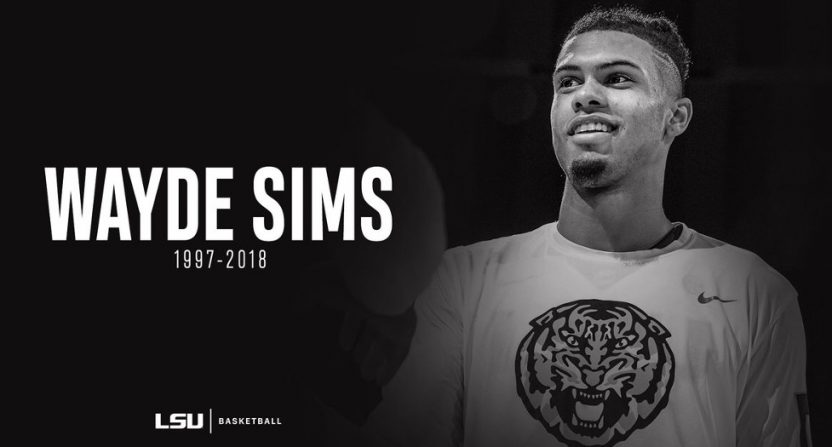 LSU junior basketball player Wayde Sims was fatally shot during a fight in the early hours of Friday morning. Sims, the son of former LSU player Wayne Sims, was a 20-year-old junior who’d played in 63 games (starting 15) over his first two seasons at LSU, and he was just hours away from the Tigers’ first official practice this year. As per Baton Rouge police, an argument outside a fraternity party at Southern University (also in Baton Rouge) turned into a fight shortly after midnight, and one shot was fired; Sims was shot in the head and later pronounced dead at hospital. Two bystanders caught part of the encounter on video, which the police released, but no arrests had been made as of Friday evening.

Friday saw much of the LSU community, as well as the wider basketball community, offering up tributes to Sims. Head coach Will Wade called him “an unbelievable person” and “a blast to be around all the time,” saying “he’d do anything for anybody on our team.” Wade also said “We are all devastated. We need your prayers for Wayde, for his family, for all of us. We are heartbroken.” Athletic director Joe Alleva and university president F. King Alexander had their own tributes for Sims, too:

“Wayde Sims’ loss is simply unbelievable to us right now,” said vice chancellor and director of athletics Joe Alleva. “There are no words that can express our sorrow for his parents and family. He was such a lovable young man who was full of joy. We are circling around his teammates and friends who need all the love and support we can give them. We are praying for his family, for his parents. God bless Wayde Sims.”

“We are stunned and shaken,” LSU President F. King Alexander said. “To say we are grief-stricken is an understatement. Wayde was a beloved member of the LSU community whose leadership was treasured by his coach and his teammates. I knew him personally and liked him tremendously. The void left by his passing will be immense, and we ask that you keep his family in your prayers.”

Sims averaged 6.5 points per game as a freshman and 5.6 as a sophomore, also recording 211 rebounds, 37 steals, 35 blocks and 29 assists over the course of his career. He was named the 2014-15 Louisiana Gatorade Player of the Year and a first team all-state selection at University High (on the LSU campus), where he was part of three straight state titles in 2014, 2015 and 2016. Many of those who covered him in high school and college chimed in with tributes Friday:

Extremely shook this morning to wake up to the news about Wayde Sims.

I’ve known Wayde since he was 14. I was so excited the past month to hear his praise from coach Wade. I can’t believe this. pic.twitter.com/GaKpS5Wl1g

I can't even lie. This one hurts.

Praying for Wayde Sims' family and everyone who ever came across him.

Even in the bad times, I'm not sure I really ever saw him get too down on himself. Was a fun kid to cover at LSU and at U-High. pic.twitter.com/KThTQaKqYp

A difficult story on a difficult day. Prayers and peace to the Sims and LSU Basketball families.

"He Always Had a Smile" | Remembering Wayde Sims #Forever44https://t.co/ELsU36KHO0 pic.twitter.com/q1Qi5koxPT

Our hearts break for Wayde Sims’ family. This is a devastating loss for the LSU family, his hometown of Baton Rouge, & the entire state of LA. Donna and I ask that you join your prayers to ours as we remember this remarkably talented young man who has been taken from us too soon. https://t.co/1iKGQWwcEo

And other schools chimed in as well:

Sending our thoughts and prayers to the family of Wayde Sims and the @LSUbasketball program with this tragic news. We are all @SEC family and our hearts are heavy this morning.#SECFamily https://t.co/M5u2S7TKu7

On behalf of Tulane Athletics, I would like to offer our deepest condolences to the family, friends and teammates of LSU men’s basketball student-athlete Wayde Sims. Our thoughts are also with the entire LSU community during this difficult time.

As did ESPN personalities Marcus Spears and Jay Bilas:

Sick about the news of #WaydeSims of @LSUBasketball woke up to this, this morning and it’s heartbreaking for these young men to lose their lives at the hands of someone that shouldn’t make that choice for them! #RIP young Brah #Senseless

There will be a moment of silence prior to the Ole Miss game tomorrow night. pic.twitter.com/I6OSNjGNuD

It’s awful to see anyone die so young, and Sims clearly made a major impact on his team, his school, and his community. Our thoughts go out to Sims’ friends, family and all those impacted by his loss.