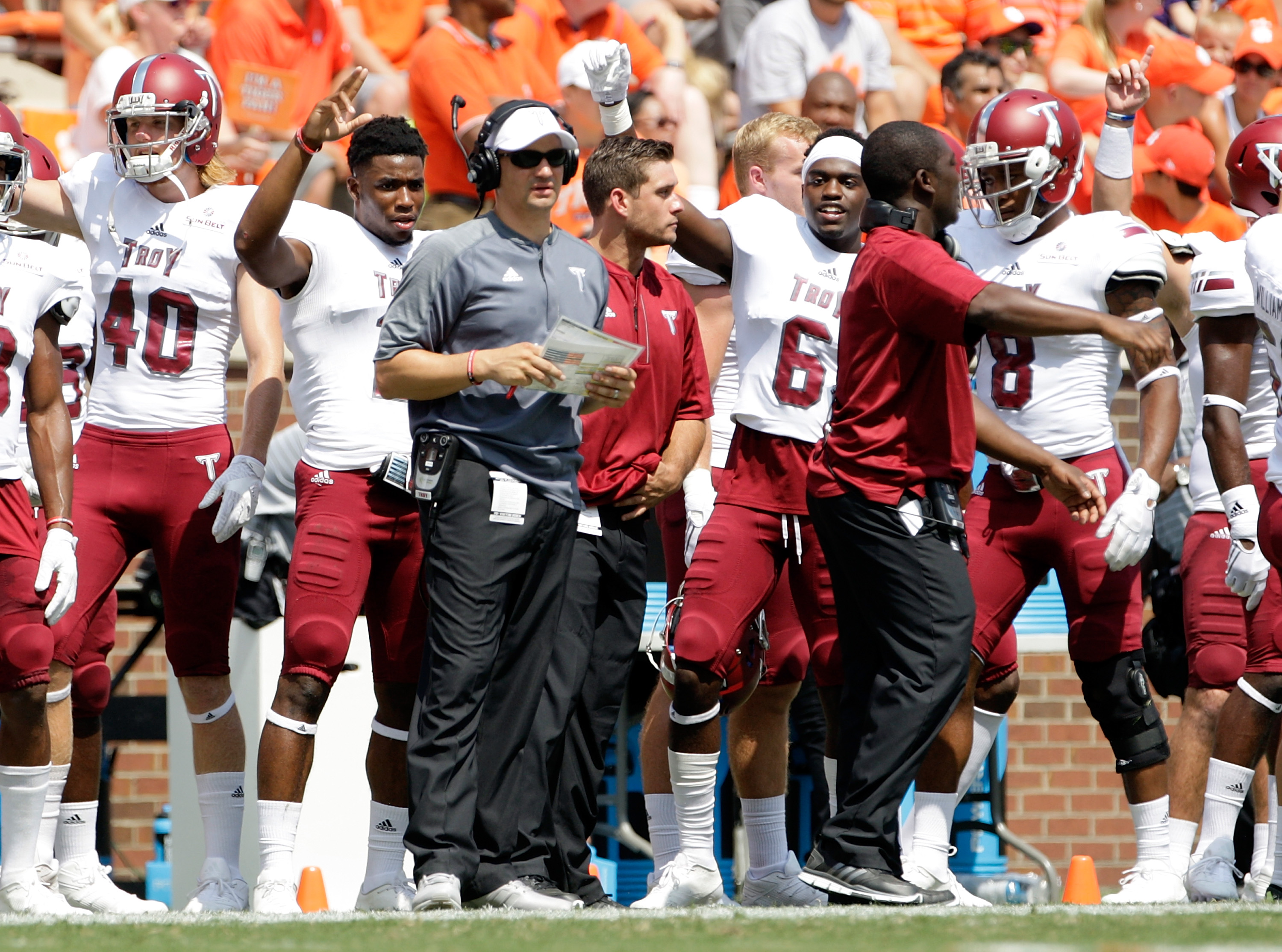 Just two teams from outside the power conferences appear in this week’s College Football Playoff rankings: The No. 21 Western Michigan Broncos (10-0 after winning on Tuesday night) and No. 22 Boise State Broncos (8-1).

But to only focus solely on those two ignores the depth of the “Group of Five” this year, which boasts quite a few teams that could crash the New Year’s bowls if given the chance. Along with WMU and Boise, San Diego State, Wyoming, Toledo, Navy, Tulsa, or maybe still Houston could all grab the G5’s automatic bid in other years. The same could be said of the Sun Belt’s Troy Trojans and Appalachian State Mountaineers.

Yes, the Sun Belt has two of the best non-power teams in the country.

Sitting at 7-1, the Trojans’ lone blemish is a 30-24 defeat at No. 2 Clemson in week two. The Mountaineers are 7-2, with an overtime loss to Tennessee and another defeat at the hands of Miami. They’re both unbeaten in-conference. They face off on Saturday in Troy, Alabama, live on ESPN3. Despite the low TV billing, it’s the lead for one of the most important weeks in Sun Belt Conference history.

Since the Sun Belt football conference formed in 2001, it’s largely been considered the bottom rung of the FBS conferences.

Even in the WAC’s final season (2012), it had three teams contending for spots in the Top 25. The Sun Belt, on the other hand, has served as little more than a gateway for programs to enter the FBS ranks and then move on to greener pastures. Five current Conference USA schools (Florida Atlantic, Florida International, Middle Tennessee, North Texas, and Western Kentucky) once called the league home. So did Utah State (Mountain West) for a few years, while Idaho and New Mexico State are wrapping up their second go-around in the conference.

But with all the rotating membership in recent years, the Sun Belt somehow came out of the realignment era of 2010-2014 looking better than it had before. From 2001-2008, no Sun Belt team won more than nine games in a season. It’s happened four times since (including Appalachian State’s high-water mark of 11-2 last year).

And still, the conference is striving for more in 2016.

Appalachian State, Troy and (defending champ) Arkansas State are all unbeaten in league play with just a few weeks remaining. Troy hosts the Mountaineers on Saturday, then Arkansas State the following Thursday, November 17. If they can get by the conference’s other two heavyweights, an 11-1 record (and maybe the program’s first Top 25 appearance) could be well within reach. For the Sun Belt, this is a lot of uncharted territory. The small, sort-of regional league could be knocking on the doorstep of a New Year’s bowl bid.

That’s not to say it will be easy, though. Not only does Troy need to win out, but other teams ahead of them need to start losing. Western Michigan has to close the regular season 1-1, and potentially lose the MAC Championship Game as well. The Mountain West group of Boise, Wyoming, and San Diego State gets trimmed to one no matter what, and if that “one” is two-loss Wyoming, there’s a potential conversation to be had. Similar weeding out happens in the AAC as well, where USF, Tulsa, Temple, or Navy will have no less than two losses even with a title game victory.

Troy’s leap wouldn’t even be that large when you look at some advanced metrics (though it’s debatable how much the committee does). Football Outsiders’ F/+ rankings have them 30th overall and within striking distance of the Top 25. WMU and Boise State are all the way up at 13th and 14th, respectively, in those rankings. However, losses (and failing to win a conference title) can affect them just as much as wins while a Sun Belt championship could boost the Trojans.

When Coach Neal Brown arrived at Troy in 2015, he was succeeding Larry Blakeney’s 24-year tenure which had settled into a new norm of stagnation. The Trojans won a share of five consecutive Sun Belt titles from 2006 to 2010, but then went 14-22 from 2011 to 2014, and then 4-8 in Brown’s first year. The young (36-years-old) coach has ushered in a quick culture change, however.

“I think, from the outside, (the Clemson loss) put us back on the national map,” Brown told the Winston-Salem Journal on Nov. 8. “It’s probably been since 2010 that Troy was on the national map — when we won the five conference championships. From an outside perspective, it put Troy in the conversation again.”

In the same article, he later focused his sights on the game at hand:

“Any time you play a game that is perceived as a big game to the outside world and people are going to be talking more about this game, they have to understand, and it’s the same for Appalachian State, you don’t have to play a perfect game to win. You just have to play really sound.”

If Troy does play “really sound,” this dream season becomes more of a reality.

In the era of the Bowl Championship Series (1998-2013), nine non-power teams made the sport’s most lucrative bowl lineup, though none from the Sun Belt. The conference shutout has continued in the two full seasons since the Playoff’s inception. Conference USA is the only other league to never make it to a BCS/Playoff bowl.

That fact may not change this year, but Troy is well-situated to put up the conference’s best fight yet. The Trojans could be a one-loss conference champ that’s hung just as tight with Clemson as big-time programs Auburn and Louisville did. Should WMU lose (especially before the MAC title game), it’ll make for one interesting College Football Playoff conversation a month from now.