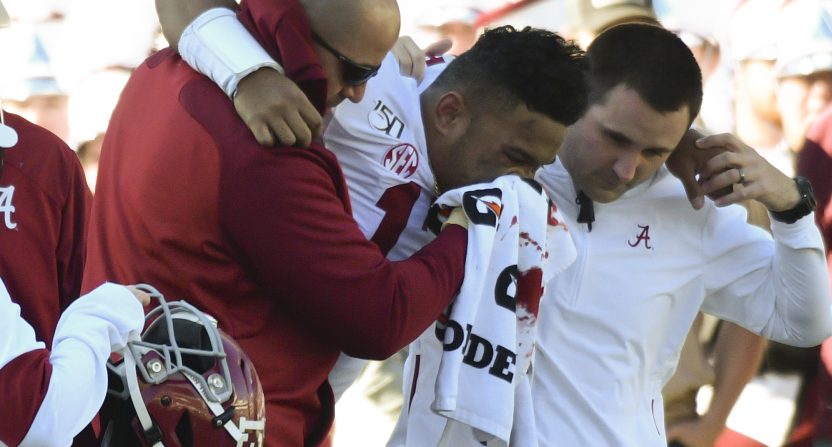 Last weekend, the Alabama Crimson Tide football season took a turn in the wrong direction. This Saturday, one risky decision might have just ensured they won’t be able to get back on track.

Star quarterback Tua Tagovailoa had to be carted off the field late in the second quarter as Alabama was wrapping up a dominant first half against Mississippi State.

Alabama was up 35-7 with three minutes left in the first half. Clearly, they’ve got this one in the bag and were on their way to rebounded nicely from last week’s loss to LSU. In a decision that is going to be dissected on Alabama sports radio call-in shows for years to come, Saban let Tagovailoa stay in the game to complete the half despite the fact that he had already been a game-time decision headed into the day.

Sure enough, as Tua rolled out to his left in order to complete a pass, he was tackled by two Mississippi State defenders. He came down at an odd angle and had the weight of at least one defender fall on him. His helmet rolled off from the impact of the hit. He ended up suffering a bloody nose and needed to be helped up by trainers when he couldn’t put pressure on his right leg.

Tua with a towel over his face after being helped up by the UA staff. pic.twitter.com/rFgPFdow0O

Tua was then carted off the field to get checked out.

Alabama QB Tua Tagovailoa is taken off the field on a cart here at Mississippi State after a huge hit. pic.twitter.com/qoKYdjWKvm

According to ESPN sideline reporter Molly McGrath, Tagovailoa was “screaming in pain” while being looked at by medical staff on the field. She also spoke with Nick Saban after the first half expired and the head coach said that Tua’s injury was related to his hip and that the series was supposed to be the last one that their star QB would play to work on a two-minute drill “just for practice.”

Saban says that was suppose to be Tua's last series to run the 2 minute drill for practice, says they need to block better so he doesn't get sacked pic.twitter.com/W0lTbDTqwp

Redshirt sophomore Mac Jones entered the game and will presumably replace Tagovailoa for the rest of the day and perhaps longer.

There are a lot of fingers being crossed in Tuscaloosa right now. The Crimson Tide are certainly still a powerhouse program full of capable players, but Tagovailoa is a Heisman-caliber quarterback and you don’t lose one of those and come out unscathed.

As Alabama is clinging to an outside hope at playing for the SEC Championship and is still very much in the hunt for the College Football Playoff, this decision to let him get a little more “practice” might end up having massive repercussions across the SEC and the entire college football landscape.

UPDATE: The injury does indeed sound very serious and, based on initial reports, could end Tua’s college football career.