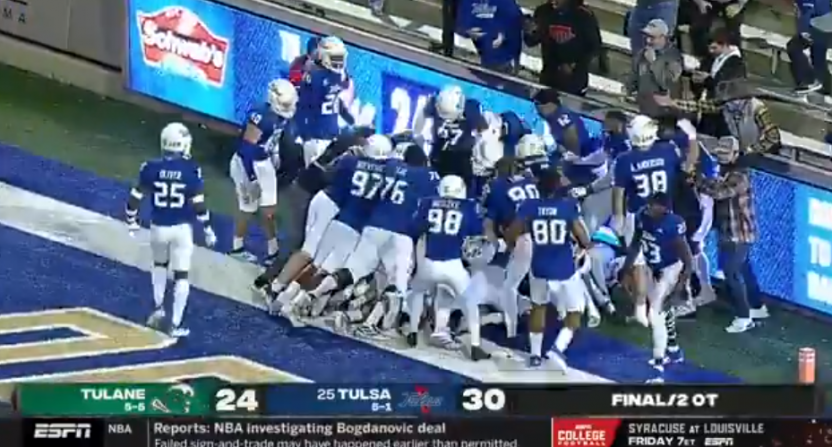 The No. 25 Tulsa Hurricanes are putting together a magical season, and they took it to new levels in a 30-24 victory over Tulane in double overtime on Thursday night.

Tulsa’s No. 1 and 2 quarterbacks — Zach Smith and Seth Boomer — left the game due to injury, leaving it all up to third-stringer Davis Brin. Well, expect Brin to move up the depth chart.

And the way Brin capped off his performance was on one of the college football plays of the year, with this Hail Mary pass to JuanCarlos Santana as time expired in the fourth quarter. Tulsa tied the game on the extra point.

Tulsa Hail Mary from a 3rd-string QB! Now in OT vs Tulane. pic.twitter.com/7rwitvEQF8

This is already crazy enough, but let’s fast-forward to double overtime with the game tied 24-24.

Tulane had third-and-goal at the three-yard line, in great shape to get a go-ahead field goal at the very least. But Tulane quarterback Michael Pratt was picked off by Tulsa star linebacker Zaven Collins (a potential first-round pick in the 2021 NFL Draft), who took it to the house for a walk-off 96-yard pick-six.

They sent it to overtime on a Hail Mary from their 3rd-string QB, and they win it in 2OT on a goal-line pick-six. pic.twitter.com/SAyewT4NXr

An incredible performance and comeback by a third-string quarterback, a Hail Mary to send the game to overtime, and a 96-yard walk-off pick-six with the game tied in double overtime. Amazing.

And this comes after another wild comeback for the Golden Hurricane just five days ago! Tulsa trailed then-No. 19 SMU 21-0, and came back to win 28-24.

Here was the go-ahead touchdown: pic.twitter.com/szxOyMm3mF

They’re now 4-0 this season when trailing by 14-plus points. The last team to even have four such comeback wins in a season was UCLA in 2005.

Tulsa is now 4-0 in games in which they trailed by 14 points or more this season,

They are the first team with 4 comeback wins from 14 points down in a season since UCLA in 2005. pic.twitter.com/cI2MQSq0dc

Tulsa follows this up with a game at Houston on Nov. 28, before hosting No. 7 Cincinnati — originally scheduled for Oct. 15; postponed due to COVID — on Dec. 4 in what should be a fun one.