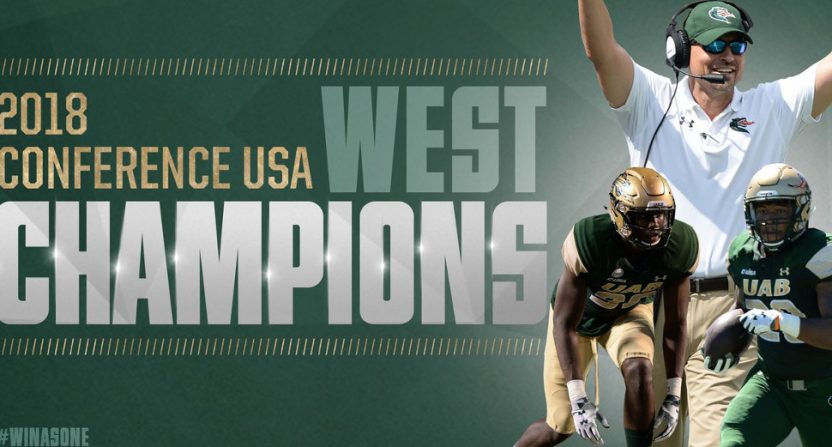 Saturday night in Birmingham, Alabama offered a reminder to the college football world that there is much more to the game than what goes on with the College Football Playoff race, which didn’t appear to see any significant developments unfold in Week 11. UAB rallied from an early 13-0 deficit at home against Southern Mississippi to pull out a 26-23 victory in overtime when Spencer Brown scored a 17-yard touchdown run for the win.

As you would expect, celebrating an overtime win in such fashion is more than enough reason to celebrate for any program. But this particular touchdown carried more significance with it, as it was not just a game-winning touchdown, but a division-clinching touchdown as well.

UAB’s win over Southern Mississippi moved the Blazers to 9-1 and clinched the Conference USA West Division title. Four years ago, that would have been nothing more than a dream, because the school had made the decision to shut down the entire football program. Now, UAB will play for a conference championship at the end of the year.

Enough credit cannot be given to UAB head coach Bill Clark. Clark took over as head coach at UAB after the 2013 season and he immediately turned in a 6-6 season in his first year on the job after the Blazers had won no more than five games in a season since 2004. But Clark’s time at UAB appeared to be cut short when the university decided it was in the best financial interest for the university to close the football program immediately after the regular season. UAB players were devastated, as were the loyal fans and students, which is totally understandable. But it did not take long for the university to reverse course on their decision and bring the football program back in 2017 after a brief hiatus. Clark stuck with the program to see it make a return even if it meant practically starting from scratch.

UAB returned to the field last season and the Blazers jumped right back into Conference USA after the conference openly welcomed them back as if nothing ever happened. UAB went 8-5 in their return and even got to play in a bowl game, the Bahamas Bowl. All things considered, it was a grand return for the football program as the Blazers set a program high for wins in a season in their return. But this was just a giant step back and forward for the program. Now, in 2018, Clark is leading UAB to the next level.

As he addressed the crowd following UAB’s win, Clark made it clear just how proud he was of all of his players who have worked hard and dedicated themselves to making UAB football something special to be a part of. Clark also delivered the message that winning the West Division is just the next stepping stone for UAB, and that they are not done yet.

UAB still has one more Conference USA game to play, the regular season finale, after a game at Texas A&M next week. UAB visits Middle Tennessee in two weeks in a game that could serve as a Conference USA championship preview for the following week, one that could also determine home-field advantage in the game. Middle Tennessee or Florida International will be the likely champion in the East Division, so UAB’s opponent is still to be decided for the Conference USA championship.

In a year that is seeing some unexpected conference championship game participants, UAB may be the one riding the most heartwarming train to their conference title game this season.