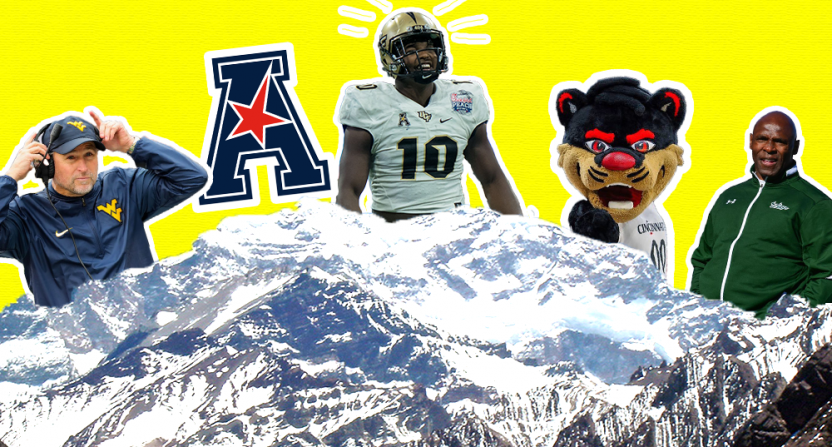 As the aphorism goes, “a rising tide lifts all boats.” While the phrase’s origins come from the economic realm, it’s come to represent the idea that success for one part of the whole will mean greater potential for success for all parties in the group. In other words, your success will benefit those around you, which will then circle back to benefit you even more.

That’s something the UCF Knights will want to keep in mind on the day after their 40-32 loss in the Fiesta Bowl to the LSU Tigers. The loss snapped their 25-game winning streak and put a dent in their case that they deserved to be in the College Football Playoff. It also opened the floodgates for everyone who has been waiting for the chance to reveal the Knights as the “fraud” they are.

Goodness it appears salt intake is off to a record pace in 2019.

In a way, the defeat could end up being a good reset for UCF. The pressure of remaining undefeated is over. And during the streak, they proved once and for all that the system is set up to keep Group of Five conference teams out of the playoff. UCF accomplished so much to be proud of, but they also made it clear that there is no road to the national title through the American Athletic Conference as it currently sits.

But that’s where the rising tides come in.

UCF’s success has brought a ton of attention to the AAC and made some college football fans take notice of its games each weekend. It helped turn the conference from something on par with the Sun Belt (in theory) to one just outside the gates making noise enough that those behind them have to take notice.

And the rest of the conference is going to ride those coattails as much as they can. Cincinnati put together a stellar season of their own, finishing 11-2 and defeating the ACC’s Virginia Tech in the Military Bowl. Schools like Temple, USF, and Memphis all made noise at certain points throughout the season and expect to keep competing in the years to come.

And then there’s Houston, who just convinced a Power Five Conference coach to leave his longtime home in West Virginia to come work for them. It’s a special circumstance given how Dana Holgerson was at odds with WVU brass and has a personal connection to the Cougars, but it’s still a huge indicator that the AAC is not messing around anymore. Holgo also joins Connecticut’s Randy Edsall, SMU’s Sonny Dykes, and South Florida’s Charlie Strong as AAC coaches with Power Five experience. Maybe some of them are also-rans looking to rebuild their reputations, but the AAC is no longer so far removed that they can’t accomplish that quickly.

All of which comes back around to UCF. The Knights have been dinged for not playing a strong enough schedule. While they work out their non-conference slate, the conference schedule is undoubtedly going to get better in the years ahead. Houston, USF, Cincinnati, and others aren’t content to be “the other AAC team” each season. They want what UCF has and they’re coming for it. All of which helps UCF’s case (so long as they hold up their end of the bargain).

The future is bright for this up-and-coming conference. Hell, give it a couple more years and we might actually be having a discussion about whether or not the AAC champion is more deserving of a CFP shot than the Pac-12 champion. The way things are trending, we might even be talking about the Power Six conferences as well.

Proud to be a Knight! Unbelievable 25 game run by @UCF_Football. Overcame a ton of adversity to unify @citybeautiful, and establish UCF as a national brand. Proud of our coaches & players. Proud of our fans. Our best days are ahead of us #KnightNation -we’re just getting started!

That’s getting ahead of ourselves but the AAC is clearly determined to continue what UCF has started. And while the Knights may have lost on Tuesday, they were already going to come out ahead before that game was even played. The “national championship” swagger might have pissed off some folks, but that was the point. Now comes the fun part…maintaining their status as the conference top dog. It’s going to be harder than it might have seemed even a few months ago. But that’s exactly what UCF wanted.