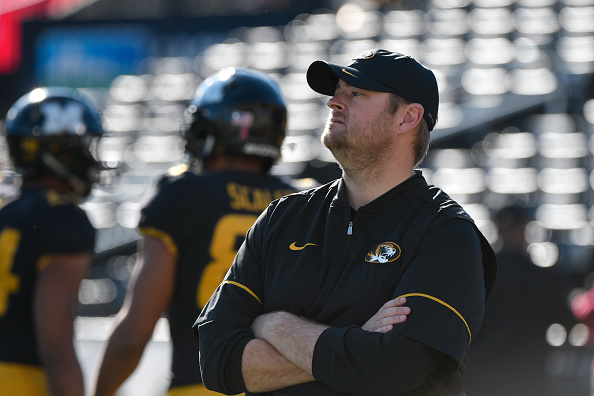 We knew Scott Frost had an eye on (his alma mater) Nebraska from the second he arrived at UCF. And when Mike Riley flamed out with the Cornhuskers this season, it seemed inevitable Frost would return to Lincoln.

Shortly after UCF won a thrilling American Athletic Conference title game over Memphis, it was official: Frost was headed to Nebraska, leaving his 12-0 Knights team behind.

That’s not to put a callous end on Frost’s tenure. He was seen as a rising coach when UCF hired him, but also one eventually headed to Nebraska. No one was sure if it would happen in two years or a few more. But it was obvious that the former Huskers quarterback was going to head “home,” wherever he wound up during the 2015 offseason.

As the wins piled up, it’s likely UCF prepared for what would come next. That’s why the school was so quick to move on its next coach. On Tuesday, the Knights hired Missouri offensive coordinator Josh Heupel to lead the program going forward.

With that hire, UCF has officially established its coaching formula for the future.

It’s not that different from the recipe laid out within a year of the AAC’s founding, really. Many of the teams in the fledgling league have hired rising names with full knowledge that they’d be heading off to greener pastures once they found success. It was the case for Josh Fuente at Memphis (now at Virginia Tech) and Matt Rhule at Temple (Baylor). Tulsa hired Phillip Montgomery with that dynamic in mind, as did SMU with Chad Morris (now on his way to Arkansas). Memphis’s follow-up to Fuente, Mike Norvell, was seen similarly. You could also make those cases for Luke Fickell (Cincinnati), Geoff Collins (Temple) and Tom Herman (from Houston to Texas), among others.

It’s not easy to hit on two or more consecutive hires, so this strategy does come with some risks. However, UCF will try and replicate it to the same success Memphis already has with Fuente and Norvell. Bring on a rising-but-not-quite-ready-to-lead-a-P5 offensive coordinator, then watch him flourish with your team and improve the status associated with coaching your program.

Heupel is a very similar hire to what Frost was back in 2015. Leading Oregon’s offense for three seasons, Frost’s unit was top-five each year from 2013 through 2015. He was getting looks from Power Five schools (including Syracuse) after that successful run, but the potential to jump to Nebraska scared off most suitors.

Frost was also an unproven head coach at the time — something that’s a gamble for any program, but especially a power like Nebraska or other blueblood programs. Sometimes, you need experience just to deal with the pressures of a job in the spotlight.

Though Heupel may not have seen the same stunning success at Missouri that Frost had at Oregon, he still accomplished plenty in a short time.

The former Oklahoma QB took over Missouri’s offense in 2016, and took the Tigers from one of the country’s worst units to one of the best overnight. Mizzou finished with over 511 yards per game in 2017, which was the seventh-best average in the country. Under Heupel, Drew Lock turned into one of college football’s most prolific passers as well. He amassed near 4,000 yards through the air this year, with a nation-leading 43 touchdowns.

Now imagine that sort of approach applied to the well-oiled machine UCF already seems to have in place, along with easy access to a wealth of talent in Florida.

Obviously, Heupel’s job is made easier by Frost’s success. But whether or not the Knights remain near the top of the Group of Five pecking order is dependent on whether he’s able to continue the momentum from this year. UCF has stopped and started before, falling from a Fiesta Bowl bid in 2013 to 0-12 by 2015. Though that stunning fall did technically lead to this (seemingly more sustainable) subsequent rise.

UCF also wants Heupel personally invested in the program’s continue growth and success. Along with the hire, the school announced on Tuesday that he’d receive 25 percent of season ticket growth going forward (assuming for as long as he’s the Knights’ coach). In an environment that’s shown attendance declines across the country, it’s a risky move for the coach. But one that could pay huge dividends for both Heupel and the school.

Hiring Heupel isn’t novel for UCF or the American Athletic Conference. And it’s also not guaranteed to work. Still, the league’s track record during its short existence seems to indicate it has a high likelihood of succeeding to some extent. The AAC’s best teams are offensive juggernauts, and even its worst (UConn aside) can usually put up points. Heupel transformed Mizzou’s offensive approach overnight. So at the very least, we’ll see a big-play focus for the Knights. That should continue to make them an appealing draw for fans and recruits alike.

If Heupel works out too, there’s no immediate draw to his alma mater (assuming Lincoln Riley’s not leaving Oklahoma anytime soon). But that proof-of-concept could go far enough to land him elsewhere, too. That’s kind of the point, even if it’s exhausting to UCF fans and players to see constant turnover at the top. Taking cues from the rest of the conference though, UCF seems committed to this approach. And it’s probably a winning formula.