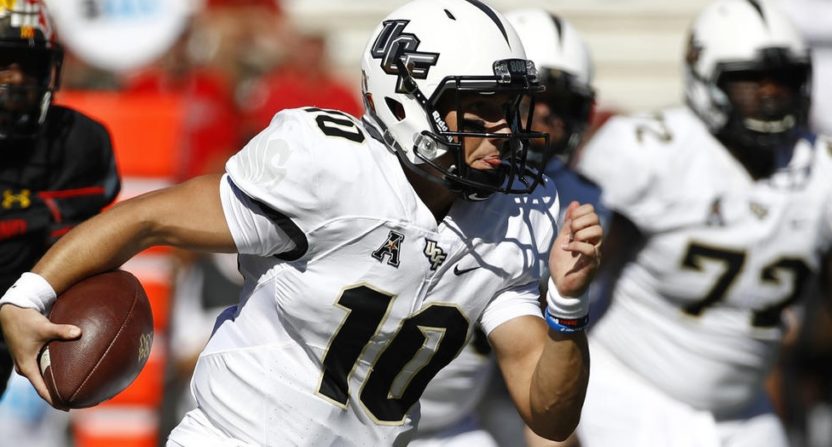 It has gone mostly unnoticed because of who they are and their conference, but UCF has quietly been one of the most dominant teams in the country to start the season. The Knights have only played three games, but Scott Frost’s program has demolished the competition.

How impressive have the Knights been? UCF has won its three games by a combined 99 points, for an average margin of victory of 33 points per game. The closest game was last week’s home win over Memphis, a 27-point victory that was tempered by a last-second Memphis touchdown.

UCF’s wins haven’t come over scrub teams either. UCF’s opponents are a combined 9-0 this season against teams not named UCF. Maryland beat Texas to open the season and Minnesota last week, but the Terrapins lost to the Knights by four scores. Memphis upset UCLA at home, but couldn’t keep the game within 25 points when the Tigers visited Orlando. FIU is 3-1 with no notable wins, but the Panthers are still 3-1.

The Knights also have several good games remaining on the schedule, replete with opportunities to impress the college football world. Road trips to Navy and SMU will be tests against good teams. And the Knights close the regular season against USF the day after Thanksgiving. UCF can definitely impress the College Football Playoff selection committee if it wins 11 or 12 games, but this season could have been very different.

How dominant are the Knights?

It is far too early to talk about what could have been for UCF vis-a-vis the College Football Playoff. A Group of 5 team making the Playoff requires a lot of help from chaos in the Power 5 conferences. Also, it generally requires multiple consecutive successful seasons, something the Knights don’t have. Lastly, it requires some quality victories and dominance over the bad teams it faces. So far, UCF is at least going above and beyond the requirements in that final category.

Just how dominant have the Knights been this year? Only including this year’s results (no preseason projections), UCF is the fourth-most dominant team this season, according to Bill Connelly’s S&P rankings. We’ll have to see if and how long it lasts, but if this keeps up the country will take notice. Being the fourth-most dominant team in the country doesn’t mean you’re in the Group of 5 New Year’s Six conversation. It means you’re in the Playoff conversation.

At this point, it’s foolish to expect a Group of 5 team to get serious consideration. Then again, the AAC is a step above the rest of the Group of 5, and one-loss Houston was ranked as high as No. 11 last year. The committee will value a good AAC team with quality wins. A win over Maryland is nowhere near what Houston had last year (the Cougars beat Oklahoma), but the Terrapins seem like a solid team and the win was a lopsided one.

Unfortunately for UCF, a non-conference schedule that includes FIU, Maryland, and FCS Austin Peay won’t impress the selection committee. It almost certainly won’t be enough to keep the Knights near the Playoff conversation. It might not even be enough to give them serious consideration in the New Year’s Six race. And all of that is thanks to Mother Nature.

UCF had two games scheduled against Power 5 teams this season. The Knights were to host Georgia Tech and travel to Maryland. Because of the fallout from Hurricane Irma’s devastating effects on Florida, the game against Georgia Tech was canceled. A planned game against FCS Maine was also canceled as the AAC reshuffled much of its schedule to make sure that every conference game would be played.

The Knights were unable to replace both canceled games. There are now only 11 games on the schedule, and no Power 5 opponent was available to make up for Georgia Tech. Austin Peay was available during UCF’s bye week, so the Knights will at least play an 11th game. Still, the non-conference strength of schedule looks a lot better when it’s FIU, Georgia Tech, Maryland, and Maine. Now the non-conference schedule of FIU, Maryland, and Maine seems mediocre at best.

Georgia Tech is a good ACC team. We don’t know how good yet or whether the Yellow Jackets are contenders in the Coastal Division. They probably should have beaten Tennessee, and are already 2-0 in ACC play. A loss to Georgia Tech would not hurt the Knights much. A win over the Yellow Jackets would improve the resume. A dominant win would make the entire country take notice, and quickly.

Instead, none of that will happen.

There is no right choice for the selection committee when looking at UCF’s resume. The Knights can only play the teams on their schedule. The resume can only include the teams actually played; that’s just the way it works. We can ask “what if,” but we can never answer that question.

If UCF goes 12-0 and does so in dominant fashion, the committee will have to give the Knights some benefit of the doubt. They certainly will deserve a New Year’s Six slot. They would deserve that spot even with an 11-1 season. The Knights play one of the toughest possible AAC schedules, and several of the biggest games are on the road.

A College Football Playoff berth would only ever really be on the table if we see significant chaos in the Power 5 conferences. The Pac-12 is already close to cannibalizing itself, though most one-loss P5 champions would come before any AAC team anyway. It’s hard to see the SEC fall out of the running (unless Alabama loses two games, which just isn’t happening) — and the same goes for the ACC (unless Clemson impossibly drops two games). The Big Ten and Big 12 are still a bit up for grabs, so we could see those conferences cannibalize themselves.

Even if we do see the P5 conferences leave an opening, we would need a truly dominant Group of 5 team with a good set of non-conference wins before the conversation can even start. UCF has the potential to have that dominance. The potential for quality wins was taken away by Hurricane Irma; it would be an absolute shame for Mother Nature to take away our first chance at a Group of 5 Playoff contender.

This is also a choice the selection committee does not want to be forced to make. The committee is certainly rooting for the Knights to slip up or for the power conferences to have four clearly Playoff-worthy teams. Because if the P5 conferences don’t, and if UCF keeps playing this well, someone will have to explain why the Knights just didn’t have the wins to earn a Playoff bid — and whether a hurricane-canceled game might have changed that.