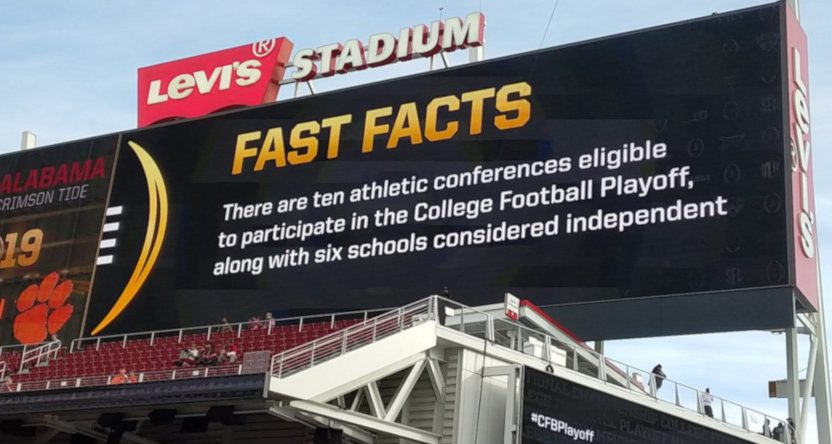 The College Football Playoff is big on its claims of access, saying on its official website that “Every FBS team has equal access to the College Football Playoff based on its performance. No team automatically qualifies.” But in actuality, that’s not true at all; two straight years of undefeated regular seasons and two straight American Athletic Conference championships from UCF didn’t get them above #8 in the final CFP rankings, while independent Notre Dame made it in at 12-0 and Big 12 champion Oklahoma made it at 12-1. And the next possible teams were #5 Georgia, #6 Ohio State and #7 Michigan.

Putting aside the numerous arguments about if UCF should actually have received playoff consideration under the current system, if UCF’s really good or not, and if the playoff should be expanded to eight teams to allow all five Power Five champions in while also making room for a team like UCF, the fact remains that under the current system, there doesn’t seem to be a path in for teams like UCF. And that led to a funny Reddit CFB Twitter post about a CFP video board at the national championship game in Santa Clara, and quite the response from UCF’s official football account:

Regardless of your feelings on if Group of Five schools like UCF should have a shot at the current playoff, this seems like totally deserved mockery. No, there are not actually ten athletic conferences and six independents really “eligible” for the current four-team playoff. Yes, every FBS team is potentially a candidate, but the committee has made it clear over and over again that schools like UCF, Fresno State, Boise State and other Group of Five powerhouses aren’t actually going to get an invite. (Unless there’s some unprecedented level of chaos that leaves a lot of Power Five champions with multiple losses.) In UCF’s case, that was obvious very early this year. And the same can be said for every independent not named Notre Dame.

Of course, it’s not guaranteed that any Group of Five team or non-Notre Dame independent would actually be a better choice under the current system, and arguments can be made for both sides there. But CFP history to date makes it pretty clear that non-Power Five, non-Notre Dame schools aren’t “eligible” in more than name. And that leads to an interesting discussion of UCF’s Twitter actions.

This is far from the first time UCF’s football account, other school-associated accounts, and even athletic director Danny White have taken their case to Twitter with salty remarks about the current system. And that’s not a perfect approach; there are some who don’t like UCF’s Twitter commentary, and there are even more who don’t like what that leads to from some fans. But it’s also hard to criticize UCF for using the one tool they have available to them; people tell them to schedule more Power Five teams, but that’s easier said than done (especially when teams like Florida want to trade two home games for one instead of a one-for-one deal), and there’s no evidence that the CFP would actually consider them even if they beat more Power Five teams.

Social media is the main thing UCF can use, and the main way they can take their cause to the public. And it’s not necessarily going to change anything; it should be noted that the CFP figures in power are insisting playoff expansion won’t happen until at least 2026 (but of course, many people said there would never be a playoff until there was one). But clowning the CFP’s obvious hypocrisy on Twitter makes some sense, and maybe it will help people realize that the CFP claims of “eligible” aren’t entirely accurate. At the very least, it gave us some pre-CFP fodder to discuss.