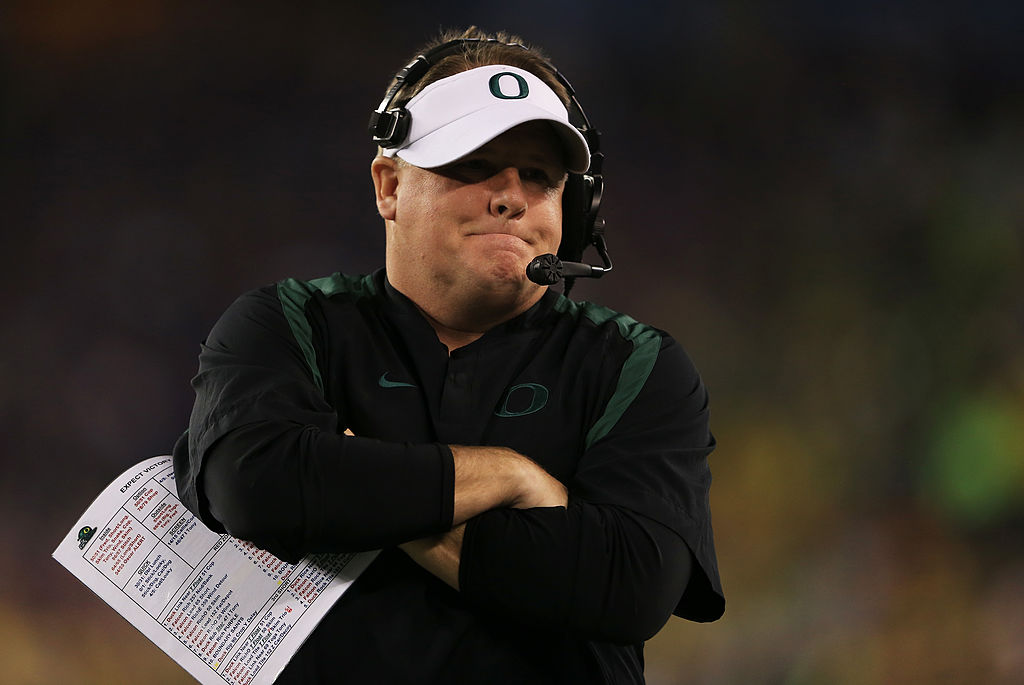 Months ago, when you started to look at some of the potential job openings that would be seen around college football, the expectation was Chip Kelly would be making his return to the coaching ranks somewhere. It was just a matter of where.

Despite the big openings in the SEC like Tennessee and Florida leading fans to put all their eggs in the Chip Kelly basket, the simple truth is neither one of those programs would be the perfect fit for Kelly.

UCLA is here to bring Chip Kelly back home to college football after a four-year absence that was marred by being fired from two NFL jobs in two seasons and a year in the ESPN studio in Connecticut. Kelly has always kept his eye open to a possible return to coaching and had the luxury of being able to hand pick his landing spot.

At UCLA, Kelly will have a chance to return to the Pac-12 and do so at a program that has long been considered an underachiever in the college football world but one that should be expected to be held to a higher standard. Kelly’s arrival at UCLA comes at the perfect time for the Bruins.

Chip Kelly took over as Oregon’s head coach prior to the 2009 season, succeeding Mike Bellotti following his own successful run as Oregon head coach. Bellotti moved into an administrative role and it was Kelly who took the Oregon football program to a new level as a national title contender. Under Kelly, Oregon finished in the top 5 in three consecutive seasons, won a Fiesta Bowl and Rose Bowl and played in the BCS National Championship, where they fell just short against Cam Newton and Auburn.

Nobody would question the success Kelly had at Oregon even if failed to net an elusive national championship. His record at Oregon is why so many fans have coveted their program signing Kelly, even if Kelly’s time at Oregon ended as the program was slapped with some NCAA sanctions and Kelly left for the NFL with a showcause (which has since expired).

As Kelly returns to the Pac-12, the expectations will be lofty at UCLA, but what remains to be seen is just how much impact Kelly can still have on the college game. His offensive style at Oregon was one that worked well with the program at the time. His up-tempo style was perfectly molded to take advantage over the competition in the Pac-12 and against many non-conference opponents Oregon faced from the Mountian West Conference or the Big Ten or Big 12.

And Kelly maximized the impact of Oregon’s unique style of uniform for recruiting purposes to help land some of the best recruits Oregon had seen in years. Of course, not all of those recruiting efforts were sin-free in the eyes of the NCAA. As Kelly moves to Los Angeles, it is fair to wonder how much Kelly can still resonate with recruits as the years have gone by.

Kelly has been away from the college game for a few years, and a lot has changed in that short period of time. No longer does Oregon dominate the uniform game the way they used to, as more and more schools are rolling out alternate uniforms to dazzle the high school recruits. The talent pool in the Pac-12 alone has become deeper than when Kelly was at Oregon and Jim Harbaugh was at Stanford, with the two regularly battling for Pac-10 and Pac-12 dominance.

Most importantly, Kelly is taking over a UCLA program that is playing in the shadows of a rising USC program, with the Trojans no longer restrained by sanctions that were being dealt with during a portion of Kelly’s run at Oregon when Lane Kiffin was the head coach of USC. Things are a tad different now.

Kelly may also be a bit different too. Will he stick to the offensive system that worked so well for him at Oregon, or will time away from college and spent in the NFL have led to an evolution of football theory for Kelly? He may be a bit stubborn, and his playbook always seemed more tailor-made for success in the college game where the athletic advantages can be utilized more than in the more-balanced NFL. Expect Kelly to stick to what he knows has worked in the past, but watch to see if he has learned how to make adjustments if UCLA fails to clear a hurdle thrown their way.

But the mere fact we will see Kelly coaching in the Pac-12 again brings a much-needed sense of optimism to the Bruins. Jim Mora was unable to capitalize on a window of opportunity in the Pac-12 when USC was tied down despite having two NFL-bound quarterbacks at his disposal. Talent at UCLA should not be a concern, but having the players capable of playing the style Kelly will try to adopt will be essential. Don’t expect Kelly to have UCLA competing for a Pac-12 championship in 2018, but we should see pretty quickly whether or not Kelly still has what it takes to make a football program fun to watch.