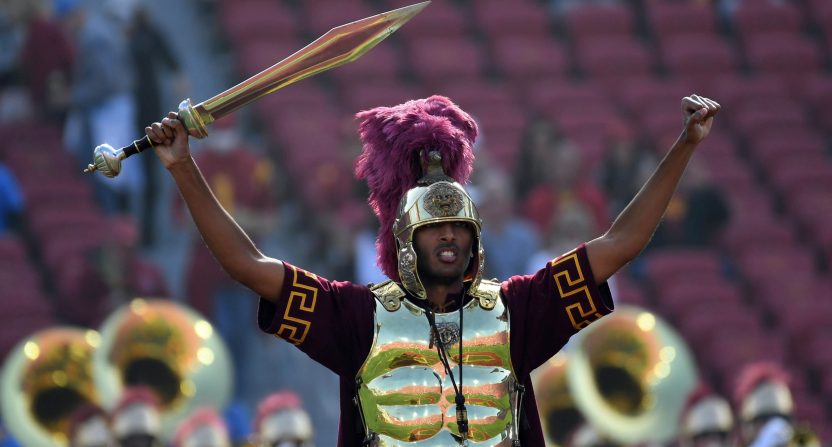 College realignment never dies, it simply waits until you least expect it.

In a move that could shift the college sports landscape pretty significantly, Pac-12 insider Jon Wilner is reporting Thursday that USC and UCLA are planning to leave the conference and join the Big Ten Conference.

Source: USC and UCLA are planning to leave for the Big Ten as early as 2024. Move *has not been finalized* at the highest levels of power.

Wilner makes it clear in his tweet that the schools have not finalized the details yet, but if he’s willing to put this out there, there’s gotta be a strong reality to it happening.

Bruce Feldman and Dan Wolken also chimed in to back up the report.

Source tells me that there is a lot of truth to @wilnerhotline report about USC and UCLA in discussions to leave for the Big Ten. My understanding is USC and UCLA reached out to the Big Ten.. certain legal parameters and bylaws need to be followed for obviously legal reasons. https://t.co/2NSDv8YtWA

I’ve confirmed that this is accurate. USC and UCLA are pursuing Big 10 membership, per sources. I wouldn’t rule out future expansion of Big 10 either. https://t.co/lwjhNWp4Ts

College athletics has been changing in spurts over the last few decades and while the idea of two schools in Los Angeles playing in the Midwestern-based Big Ten might have sounded impossible just a decade ago, we already have Rutgers and Maryland in the Big Ten while Texas and Oklahoma are en route to the SEC and college football’s powers centralize their grasp on control and money even further.

This is a bombshell report that will have a massive impact on the path forward for the Pac-12 (now 10 again?), the Big Ten (which could expand even further), the ACC (which needs to keep up with the Big Ten and SEC), and the rest of the sport.

Plenty more to come on this for sure, but the immediate reactions around the college sports world were chaotic as expected.

Turned on the Alliance faster than Lando https://t.co/zKV99d2wjR

My god, if this actually happens it means my chances of getting a bar in LA to put the TV on Big Ten Network will go from 0% to 0.1% https://t.co/w8IK9KWtv7

This of course impacts Bill Walton in ways I cannot even imagine. Big Ten, conference of champions? https://t.co/h5L4flNIYX

All of this sucks https://t.co/Yjul40jRjl

From Piscataway to LA. YES!!! https://t.co/i9VaswovGf

if you'd like a laugh, please imagine ucla and usc trying their best against big ten wrestling programs