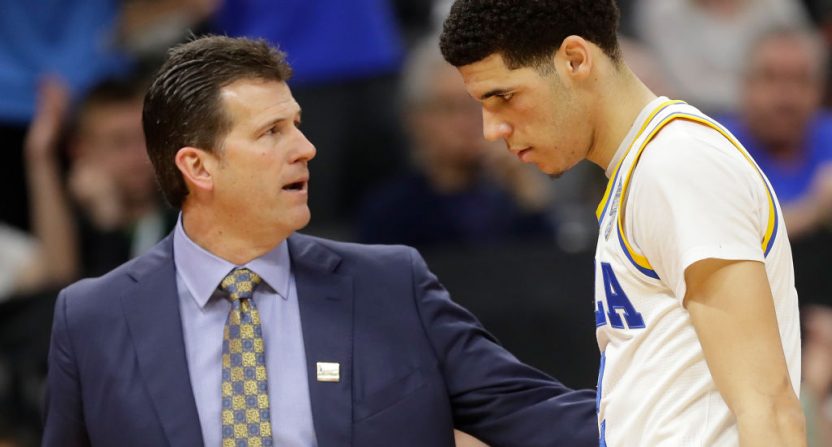 The UCLA Bruins were eliminated from the NCAA Tournament last night after an 86-75 loss to Kentucky in the Sweet 16. And with the loss came two more big stories in the postgame.

For one, UCLA star freshman point guard Lonzo Ball told reporters that he will enter the NBA Draft:

But that news is hardly a surprise as UCLA head coach Steve Alford alluded to. Ball is a virtual lock to be a top-three pick and may go No. 1 overall (plus we know Lonzo’s dad already thinks his son is better than anybody in the NBA!).

A much more eye-opening story to emerge after Friday night’s loss was Alford telling ESPN’s Jeff Goodman that he is “absolutely 100 percent not going to Indiana” and is “staying at UCLA”:

I am Absolutely 100 percent not going to Indiana. Staying at UCLA. I am happy. Love it here. Have a great class coming in, and brand-new practice facility. Obviously, I love my alma mater. Committed to UCLA. I am not going to talk to Indiana. I am staying a Bruin.”

Alford also spoke with CBS reporter Tracy Wolfson and said that there have been “a lot of fake reports” regarding his future:

Alford, 52, has been heavily linked to Indiana — his alma mater — since the Hoosiers fired Tom Crean last week. There has even been talk that Adidas could pay for Alford’s $7.8 million buyout at UCLA to get him to Indiana (yes, you read that right).

Jeff Goodman appeared on SportsCenter late on Friday night and said that Alford was “pretty emphatic” with the postgame comments. Goodman believes Alford is indeed staying at UCLA:

In that clip, Goodman also named Mike Woodson (but said this was unlikely), Archie Miller, and Chris Mack as candidates for the Indiana job:

There’s a fragment of the [Indiana] fan base and boosters that would like Mike Woodson- NBA assistant, a former head coach, never coached college, 57 years old. I don’t think that’s gonna happen either.

Will they take it? Neither one are a slam dunk to take it. Remember, Archie Miller — according to my sources — would really like Ohio State when Thad Matta eventually leaves there. And Chris Mack, it’s his alma mater at Xavier. So neither one is a lock to go to Indiana, but I think both will be in the equation if Steve Alford is not.

As for UCLA, well, their fans would probably rather have Lonzo Ball back than Steve Alford if they had the choice. But Alford at least has the nation’s No. 2 recruiting class coming into UCLA next season, and maybe the Bruins are (finally) back to being a college basketball powerhouse.