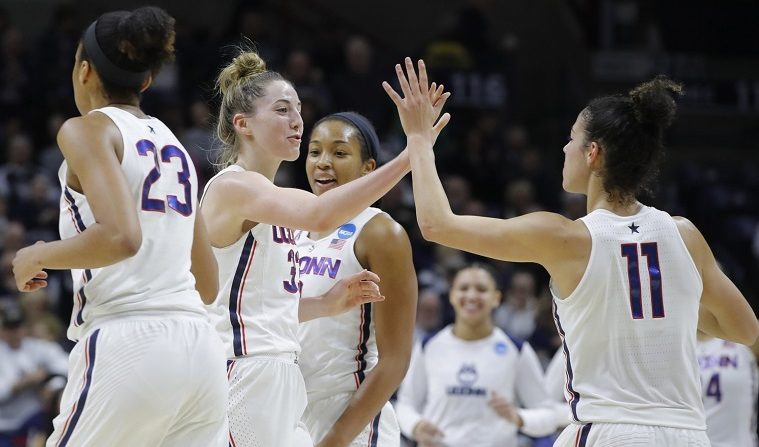 With a regular season record of 32-0 and earning the No. 1 overall seed in the NCAA Women’s Basketball Tournament, Connecticut was a virtual certainty to easily dispatch St. Francis in their first-round game on Saturday. But we now live in a world where a No. 1 seed has lost to a No. 16 seed in the Men’s Tournament, something that had never happened before.

So is it at all possible that the Huskies were just a bit more focused, a bit more intense against the Red Flash to guard against apathy and another historic upset? Probably not. This is far from UConn’s first rodeo. There’s a long tradition that’s been established in Storrs, and no team wants to be the one which goes against it. Coach Geno Auriemma is beyond expert in how to prepare his team for a tournament run and concentrating on the task at hand.

Nevertheless, UConn was clearly in no mood to mess around for their early 11 a.m. ET tipoff against St. Francis. The Huskies scored a NCAA Women’s Tournament record 140 points in a 140-52 victory. The previous record was 121, set by Alabama in 1995. And the Crimson Tide needed four overtimes to rack up that point total versus Duke. (The Men’s Tournament record for points in a game is held by Loyola Marymount, which scored 149 in 1990.)

Connecticut cleared the milestone with 7:26 left in the game on a three-pointer by Kyla Irwin, giving the Huskies a 122-50 lead.

Those 140 points were far from the only record set by the Huskies on Saturday. UConn erased any doubt from the first tip, scoring a record 55 points in the first quarter. (That surpassed the 54 points Virginia scored in total during its historic loss Friday night.) The onslaught continued on the way to a record 94 points in the first half.

The previous NCAA Women’s Tournament high for points in a quarter was 41, set by Connecticut in 2016. (Central Michigan scored 45 in a 2016 regular season game.) And the most points that had been scored in a half, regular season or postseason, before Saturday was 80, set by Long Beach State in 1987.

UConn’s 88-point margin of victory was the second-largest in NCAA Tournament history (both women’s and men’s). Baylor defeated Texas Southern by 89 points in a 119-30 victory during last year’s tournament. At least St. Francis can say it scored 20 more points in its record loss? But maybe not before Huskies fans would point out that their team scored 21 more points than that Lady Bears team.

It's an early game of hot ? for @UConnWBB!

Check out that ball movement! pic.twitter.com/FxOr8Emcx8

“That’s one of the strangest things I’ve ever seen,” Auriemma told reporters after the game. “The pace of the game was unlike anything that you would expect in a tournament game like this. It’s like watching one of those old Loyola Marymount games. Once the pace was established, it just became, for us, ‘How many layups can we get? And how many open shots can we get?'”

Up next for the Huskies is the winner of the Miami (Florida)-Quinnipiac game on Monday.

Not that it was ever in question during Saturday’s bulldozing, but a No. 16 seed has defeated a No. 1 seed in the Women’s Tournament. That distinction goes to Harvard, which beat Stanford, 71-67, in 1998.

20 years ago today we made history as the only 16-seed to defeat a 1-seed in the NCAA Tournament, beating Stanford, 71-67! #GoCrimson pic.twitter.com/7RGsDdOQUW