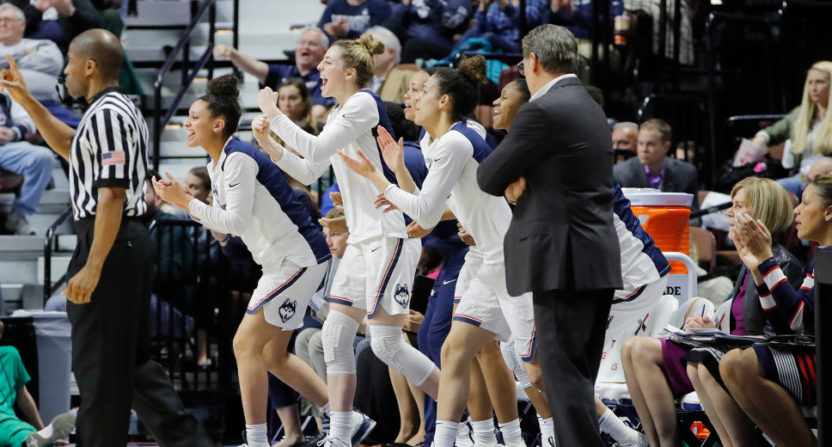 The UConn Huskies’ women’s basketball team has won a record 11 national championships (tied with the UCLA Bruins’ men’s team for the most in NCAA basketball), including four out of the last five, and they’re often incredibly dominant. That was certainly true in their American Athletic Conference tournament semifinal Monday, where they downed the Cincinnati Bearcats 75-21 to advance to their fourth conference championship game in a row. And that score was perhaps even deceptively close; UConn didn’t allow a point in the second quarter, winning that frame 21-0, and they led 43-5 at the half. This isn’t particularly new, either; this win saw the Huskies improve to 30-0, while the Bearcats fell to 19-12, and it also saw UConn boost their streak to 100-0 in AAC games (regular and tournament). But what was interesting were the numbers of people who stood up to declare that the Huskies are somehow doing something wrong by being so good, perhaps led by ESPN’s Darren Rovell:

Does a UConn fan even find this enjoyable? pic.twitter.com/qyeRaVoLrL

Rovell then doubled down on that take:

29% (9 out of 31) of games the UConn women’s basketball team has played this year has been wins by at least 50 points. Through the first 31 games, the average margin of victory is 37.6. pic.twitter.com/aGGEkQxP8Y

That’s a pretty interesting standard for what’s good and bad in terms of dominance, and while it should be pointed out that Rovell was far from alone in criticizing the score here, it’s worth wondering what he and other critics would like to see from UConn. Should the Huskies not play to the level they’re capable of (something they probably did in the fourth quarter here anyway, as they were outscored 10-9 in that frame after dominating the rest of the game) just to produce box scores that Rovell finds more appealing? Well, that could pose some problems for them when they run into teams that are a real threat, like perhaps the Mississippi State Bulldogs (who knocked the Huskies off in overtime in last year’s Final Four, ending a record 111-game winning streak).

It’s clear that the Huskies are much better than many of the teams they face each year, but the same could be said for the Golden State Warriors or Cleveland Cavaliers, and it’s notable that Rovell hasn’t been bashing those teams as much. But a much more interesting discussion of the situation came from Rovell’s ESPN colleague, senior analytics specialist Brian Burke:

It's not that the sport's structure/nature is deterministic (like NBA with high n). It's that the distribution of talent is highly concentrated. This is generally true of other women's sports and not limited to basketball.

For example, I was looking at NCAA lacrosse team ratings this morning. Identical models for men and women…std deviation of men's Div I is 1.2 goals/g. For women it's 6.6 goals/g, indicating a much bigger spread in team talent.

Yes, absolutely; team talent tends to be less distributed in women’s sports, and there are a few possible reasons for that. One is that only a few schools really heavily invest in their women’s programs in terms of coaching hires, facilities, resources and more. Tons of schools invest in their men’s teams in the hopes of the fame and fortune (in TV revenue) that comes with a NCAA tournament appearance or run, but there aren’t many that really focus on building something on the women’s side.  That means that there are less power schools, and the top players out there on the women’s side have significant incentives to choose from the power schools rather than venture further out. And because college talent influx is recruiting-based, not draft-based, success tends to breed success and the best programs tend to keep getting better. That’s true on the men’s side too to an extent, but there’s just both a larger group of powerhouses and then probably a smaller gap between the powerhouses and non-powerhouses.

Why do so many top players pick the Huskies? Playing for a school like UConn can pay great rewards in terms of coaching, in terms of chances to win titles, and in terms of a boost for an eventual pro career, even if a different less high-profile school might offer more immediate playing time. This is another notable difference on the women’s side, too; the possibility of going “one-and-done” to the NBA means playing time in a rookie year matters much more, while the WNBA draft requires players to be at least four years removed from high school, so it can work out well to go to a powerhouse, largely ride the bench the first couple of years, and then turn into a key player in your last few seasons. Oh, and all these blowouts the likes of Rovell question provide important playing time for those largely bench-bound players. So there’s incentive for top talent to keep going to UConn, and that means we’re going to probably see some blowouts.

But it’s worth noting that blowouts and excellence aren’t universally seen as a negative elsewhere, especially when it comes to men’s sports. For all the complaints about the Golden State Warriors and Cleveland Cavaliers and the “superteam era” where only a few NBA teams have a title shot, the league’s ratings are great.  Even before that, “threepeats” like the two pulled off by Michael Jordan’s Bulls and the one achieved by the Shaq-Kobe Lakers brought in some of the league’s highest attention. And on the Olympic side, few teams are remembered more positively than the 1992 Olympic “Dream Team,” the U.S. men’s basketball team that won every game by 30 or more points, including a 68-point blowout against Angola that makes this UConn win look positively even by comparison. When it comes to women’s sports, though, or some reason, there are a whole lot of people who hate dominance, whether it’s in Olympic women’s hockey or in NCAA basketball.

And what’s maybe particularly misguided there are the takes on how this is “bad for the sport.” Dominance certainly hasn’t proven to be that on the men’s side of sports, and it doesn’t look to be bad on the women’s side either. In fact, women’s NCAA basketball is coming off one of its most thrilling seasons ever, where Mississippi State made their first Final Four and beat UConn to end that streak, and where South Carolina (who downed fellow powerhouse Stanford in the other semifinal) won their first-ever title in the sport by beating the giant-slaying Bulldogs. And the Huskies’ dominance here may be anything but repeated when they get to the actual NCAA tournament, and especially when they get into the later rounds. They’re an amazing team, but there are potential challengers out there. And either way, that’s going to make for some interesting results.

But what’s especially dumb is that there’s no way for the Huskies to win the off-court discussion. Their players’ instincts are surely to play at the highest level they can, both to solidify their own playing time and to help their team succeed. But rather than have their excellence praised and rewarded, it gets bashed by critics like Rovell. And if they dial it down and don’t try too hard, they run the risk of building bad habits for later, plus they also risk being criticized for toying with their opponents.

If UConn just handed the ball to Cincinnati on every third and fourth-quarter possession, that produces a closer box score, but is that what the Bearcats want? Is that respectful to them? And does that help grow the game? The answers there are probably no, no and no. So if UConn does well, they get blasted, and if they don’t do well, they also get blasted. That’s a no-win situation, and it shows the challenges the Huskies face off the court. Fortunately for them, though, the on-court outcomes are what really matter, and they don’t have to play the likes of Rovell. (Although that would be fun to watch.)

The critics can chirp, but UConn’s excellence can also be appreciated. And maybe it will help inspire more schools to invest in women’s basketball and more players to stick with basketball, and maybe that will grow the sport and make it more competitive in the long run. After all, that dominant U.S. Dream Team has been cited by countless global athletes as a reason they got into or stuck with basketball. But that’s not UConn’s concern. Their concern is doing the best job they can on the court, no matter what the peanut gallery says. And they’re doing a bang-up job of that.