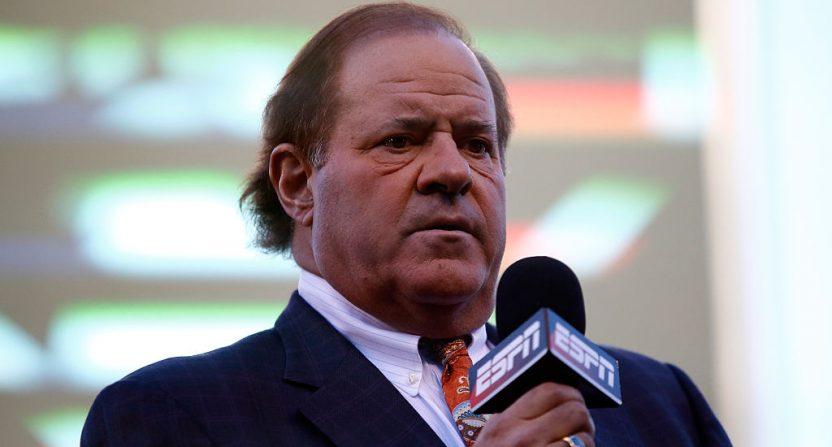 The UMass football program is set to hold its annual spring football game on Thursday night, which is an odd night to hold such an event.

But perhaps that is part of the master plan to get the college football eyeballs to focus on the program for one night in the spring. Looking to seize on the opportunity, the Minutemen will have a pair of special guests to serve as honorary coaches for the spring game; legendary broadcaster Chris Berman and new men’s basketball coach Matt McCall.

The announcement that Berman would serve as a special guest coach was actually dropped in early February around signing day, but because this is UMass football we are talking about, it was easy to have something like this either be forgotten about by now or completely buried in the shuffle of the national signing day hoopla around college football at the time.

“Chris Berman is going to be one of the guest hosts,” UMass head coach Mark Whipple said back on February 1 when looking ahead to the spring football schedule and spring game. Whipple was also hoping to get some other notable names to come join the Minutemen for the spring game. “We’re hoping to get [Tajae Sharpe] and a lot of our other guys back to be guest coaches. Maybe [Victor Cruz] will come up and James Ihedigbo. We’ll try to get everybody back there.”

Cruz, who has played the last seven years with the New York Giants, played at UMass from 2007 through 2009. He finished his college career ranked fourth all-time in UMass history with 131 receptions and earned first-team All-CAA honors in 2008 and 2009. Sharpe also played at Mass from 2012 through 2015, during which time he set the school record for career receptions and career receiving yards. Sharpe currently plays for the Tennessee Titans.

Well, they got Matt McCall instead. And that makes some good sense for UMass, as it introduces McCall to the UMass athletics community outside of the pressures of being the head basketball coach for the men’s basketball program. If he takes a loss in this one, the fans won’t get on him too much, although that would mean Berman would get to shout some celebratory “WHOOPS” in the postgame speech.

UMass is coming off a 2-10 season and has not won more than three games in a season since moving up to the FBS level in 2012.